Victaulic & SSI: Designing a Marriage Made in Heaven

Is Victaulic’s time-tested turnkey approach to pipe joining right for you? That depends on a lot of things, but if better design options and a measurable benchmark of Total Installed Cost Savings would benefit your bottom line, then you’ve got nothing to lose and everything to gain by trying. And now, Victaulic’s catalog content inclusion in SSI’s ShipConstructor software gives naval architects and shipyards the convenient ability to ask, “What if?”

In a nutshell, Autodesk ShipConstructor Pipe software helps you draft, design, and document building systems. As you create more accurate designs and increase productivity within a familiar AutoCAD-based environment, the importing of Victaulic content provides front end comparisons and advantages for any newbuild or retrofit project.

Introduced by Victaulic and SSI at the 2017 International Workboat Show, the release of native Victaulic content for MEP CAD – including IPS range couplings and fittings, valves, strainer and flange adapters – is a ‘win-win’ for everyone. Darren Guillory, Technical Solutions Specialist at SSI ShipConstructor Software, explains, “It’s a win for Victaulic because it gives far more market exposure to their awesome products. It’s a win for the end user as it reduces costs in many ways, and for ShipConstructor, it makes our product offering better, as well. It’s a ‘win-win’ all around. From our side, we’re always trying to better our software – this is one way to do just that.”

Advantage: SSI & Victaulic
Leveraging a new and more convenient data source, designers now have a new tool at their disposal. Able to be loaded and imported in both metric and imperial versions, the financial advantages of integrating Victaulic’s catalog into SSI’s sophisticated but easy to use software quickly become apparent. “For shipbuilding,” says Kenneth Verlinden, Victaulic’s Virtual Design EMEIA & Content Manager, “We aim at weight savings, for instance, because shipbuilding involves to a large extent, flanges. And a flange has a weight associated with bolts and nuts. And, of course we have a time savings with Victaulic over flanging.”

SSI’s Guillory adds, “When it comes to catalog and equipment items that are inside of the ShipConstructor environment, each one of those catalog items can be pulled into a reporting system. Since that data is in the catalog, you can do a comparative weight study if you wanted to. Hence, if you are retrofitting from a standard piping system to a Victaulic system, you can see the difference in both the weight and space savings that you would achieve.”

Ultimately, the vessel owner gets a more quickly designed, cost-effective vessel that proceeds through the assembly process with fewer of those dreaded and expensive “change orders.”

That said; the biggest benefactors will first be the design firms and shipyards. Guillory continues, “For sure, because you already have the advantage of using ShipConstructor, and being able to easily import these catalogs into your design. It also gives Victaulic a marketing advantage because estimators at these yards and design agents may go with this because they can get from design to production, that much faster.”

Follow the Money
The one thing that users won’t see within the software and its Victaulic catalog add-on involves the cost differentials between a traditional flanging system and that which Victaulic brings to market. That’s because cost typically is an estimating or front office function. In terms of the time savings of how much more quickly a Victaulic system can be put together, that doesn’t show in the software. “The Victaulic grooved system is always going to take less time,” says Victaulic’s Verlinden. And, as any shipyard executive knows, time is money.

Is importing Victaulic’s product data into SSI platforms difficult? Not really, says SSI’s Guillory. The collaboration includes a 3D component, which can be especially important when looking to retrofit BWTS systems onto existing tonnage. “Yes, and being that ShipConstructor runs on top of the autodesk product, we can export directly to the Navisworks product and represent what you are building, in spec, with as accurate as possible models for design and/or review.”

Victaulic’s role in the equation doesn’t end at the insertion of its data into the SSI environment.

That’s because, eventually, this collaboration will make for more accurate proposals and more dynamic pre-bid documentation. “You have accurate manufacturer’s content, so, if you are doing it traditionally, and you have Victaulic in mind, if somebody has to do the conversion then you always run the risk that you miss something or you have too much material. Using CAD software like this, you have all the parts and nuts and bolts, so to speak, you have all the information in a report and send it to a Victaulic representative and then, you can get an accurate pricing estimate.”

The advantages run even deeper, says SSI’s Guillory. “When Victaulic goes out to market, typically an SSI user or a company using SSI design tool, the engineering company typically has to build their own catalog. With Victaulic having this available to import quickly, it saves the individual user from having to go from part to part within the catalog. If your weight constraints are specific and you are designing or adding your catalog or you are transcribing from a catalog that you have on your desk as opposed to getting it directly from the manufacturers who developed this catalog, it is a huge cost savings.”

Legacy Hardware & Software: a Marriage Made in Heaven
The new collaboration between Victaulic and SSI goes live for customers in the first part of April. The melding of Victaulic’s legacy hardware into a standard, well-known industry software package is a natural progression of Victaulic’s forward-thinking vertical integration process. That’s because, while Victaulic remains solidly connected to a rich and varied past, it also looks constantly ahead to emerging and established technologies alike. SSI’s Guillory says that’s exactly the path to be on.

“That’s the key. It gives the customer the flexibility to go with the Victaulic toolset if they so desire, and SSI doesn’t keep an inherent pipe catalog in it so the Victaulic option provides greater flexibility and ability to access a specific pipe set.”

Since the 1920s, Victaulic couplings have demonstrated their value in countless maritime applications with early approvals from Lloyds’ Register and Bureau Veritas, among others. These products are mainstream parts of the marine sector, their use limited only by the imagination of designers, builders and operators who constantly find new applications to improve their bottom line. And, now, designers won’t have to work nearly as hard to make that happen.

‘Traditional’ piping methods (such as welding) can take years of experience to become efficient and productive. Conversely, and with Victaulic grooved products, the learning curve is shortened to a matter of days. That time savings, coupled with a streamlined design process enabled by clever collaboration with a mainstream software provider, might just be a game changer, going forward.

At Victaulic, vertical integration at its base definition involves delivering innovative pipe joining solutions that leverage a one-stop-shop approach of in-house control of all tools, material production, training, service, sales, and everything in between. Augmenting all of that is Victaulic’s Cost and Labor Analysis, Weight Analysis, Jobsite Training, and Installation Inspection that accompanies each sale. Add to that, the convenience of design CAD/CAM software integration? That’s a marriage made in Heaven.


(As published in the April 2018 edition of Marine News) 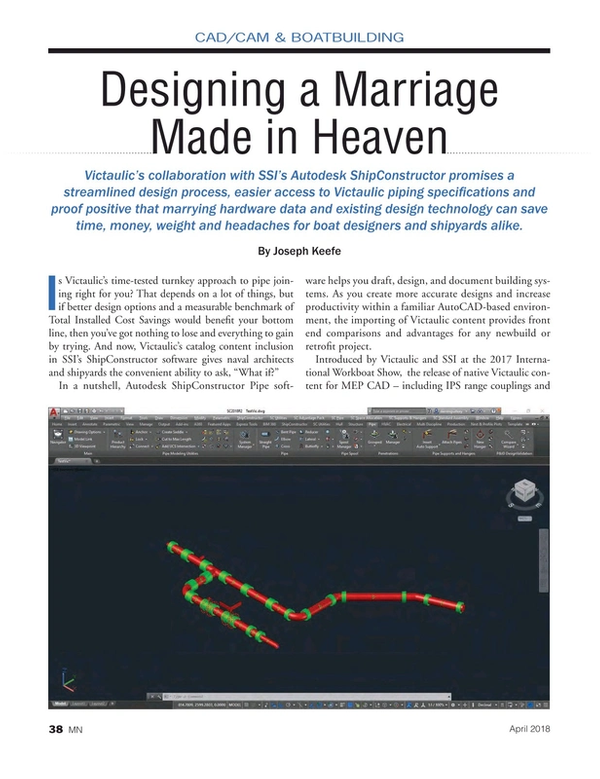 Read Victaulic & SSI: Designing a Marriage Made in Heaven in Pdf, Flash or Html5 edition of April 2018 Marine News

Other stories from April 2018 issue