As the domestic offshore wind industry comes to life, U.S. flag vessels will necessarily be part of that expanding equation.

A potential sea change came with the recent announcement from Aeolus Energy Partners that the renewable installation and operation company was investing in a fleet of Jones Act-compliant vessels dedicated to the offshore wind industry.  Long a barrier to entry for foreign and domestic prospectors alike, the Jones Act, a portion of the Merchant Marine Act of 1920, holds:

In other words, vessels transporting “merchandise” within the three nautical mile territorial sea of the United States must be US-built or re-built, and US-flagged. Further, the vessel must be 75% US-owned and US-crewed.

There is some uncertainty around the extent to which the Jones Act applies to the offshore wind industry for operations on the Outer Continental Shelf, which Congress has declared through the Outer Continental Shelf Lands Act (“OCSLA”) to extend 200 miles, beyond the territorial sea.  The gray area centers around the OCSLA’s limiting language, which extends the application of federal law to:

“[T]he subsoil and seabed of the outer continental shelf and to all artificial islands, and all installations and other devices permanently or temporarily attached to the seabed, which may be erected thereon for the purpose of exploring for, developing, or producing resources therefrom.”

As interpreted through opinion letters and practice of the Customs and Border Patrol Agency, which is tasked with enforcing the Jones Act, the term “resources” has been given the meaning ascribed to it under the Geneva Convention on the Continental Shelf: “the mineral and other non-living resources of the seabed and subsoil together with the living organisms belonging to sedentary species.” Article 2.4, Geneva Convention on the Continental Shelf (19 Apr. 1958). As such, the term is generally interpreted to exclude activities that are not intended for the exploration, development or production of seabed mineral resources. Under this view, then, offshore wind power generation is excluded, given that it does not contemplate the exploitation of mineral or other resources from the seabed.

While the pile driving activity necessary to install wind turbine towers on the seabed likely is not an activity subject to the limitations of the Jones Act, the transport of wind turbine components, installation equipment, and personnel from US ports to the wind farm site most certainly is. As of today, there are no Jones Act-compliant vessels to service the offshore wind industry in US waters, a deficiency that has long featured among the primary headwinds stunting the development of the US offshore wind market. In addition to concerns about environmental impacts, NIMBY-opposition, the lack of port infrastructure, deficiencies in supply chain and manpower resources, financing challenges and the dearth of federal regulatory support, developers have historically been challenged to compose a fleet of vessels that could install a demonstration size windfarm project, much less a commercial-scale one.

One strategy devised to get around the Jones Act limitations, which was implemented at the Block Island demonstration windfarm, combined the use of a foreign-flagged heavy-lift jack-up vessel, assisted by purpose-built lift-boats. Fred Olsen Windcarrier, a Norwegian developer, supplied the jack-up, which transported the nacelles to Rhode Island from Saint Nazaire, France. Once at the project site, the U.S.-flagged feeder vessels, supplied by Falcon Global, a subsidiary of Seacor, shuttled the remaining components from port in Providence, RI to the Block Island installation site.

In addition to the lack of turbine-installation vessels, the nascent US offshore wind industry lacks a Jones Act compliant electrical transmission cable-installation vessel. At Block Island, this gap was filled with retrofitted barges. Durocher Marine Division, subcontracted by LS Cable, installed a 22-mile transmission cable from Rhode Island to Block Island, a 6-mile export cable from Block Island to the offshore wind towers, and four inter-array cables between the five turbines. In order to complete the installation, Durocher Marine designed and constructed a self-propelled Dynamic Positioned Barge to lay and bury the subsea cable installations.

While a similar approach is being considered for the installation of the Icebreaker windfarm off of Cleveland, Ohio, it is unlikely this strategy would prove efficient or cost-effective for the installation of a commercial windfarm, which can range anywhere from 15 to 62 turbines. Further, a number of the windfarms currently in the development pipeline are sited from three to 30 miles offshore, whereas the Block Island project was only three miles from port. Moreover, technological advances, such as the development of GE’s mammoth Haliade-X 12MW turbines would stretch the physical and logistical capability of an installation strategy premised on the combination of foreign jack-ups and US converted tug-barges.

The increasing investment in the US offshore wind market has prompted several recent announcements regarding Jones Act-compliant solutions for the lack of US installation vessels. The first came on March 30, 2018 from Fred Olsen Windcarrier and Falcon Global, the team that installed the Block Island turbines. The companies signed a cooperation agreement whereby Falcon Global will provide Jones-Act compliant lift boats to supply Fred Olsen’s heavy-lift jack-up installation vessels, which the companies claim will be capable of installing the largest turbines in the market. The teams will consist of up to four vessels, depending on the size of the installation project. The second came from Aeolus Energy Group in early April with the announcement that Aeolus intends to build a complete wind-installation fleet of US Jones Act-compliant vessels.  According to the company, its plans include:

When Aeolus brings its full fleet into operation, the US offshore wind industry will receive a tremendous shot in the arm, given that the Jones Act’s protectionist requirements have handcuffed many developers attempting to craft a work-around strategy to get their turbines installed. Until then, however, the Jones Act remains a legitimate hurdle that will require legal acumen and creative strategic planning to facilitate the installation of commercial scale wind farms in US waters with the available marine assets.

Emily Huggins Jones uses her significant environmental litigation and trial experience, combined with her background in environmental compliance, to advise clients in the chemical, steel, oil and gas and maritime industries as well as to counsel ship-owners’ trade associations.

NOTE: This article first appeared in the July print edition of MarineNews magazine. 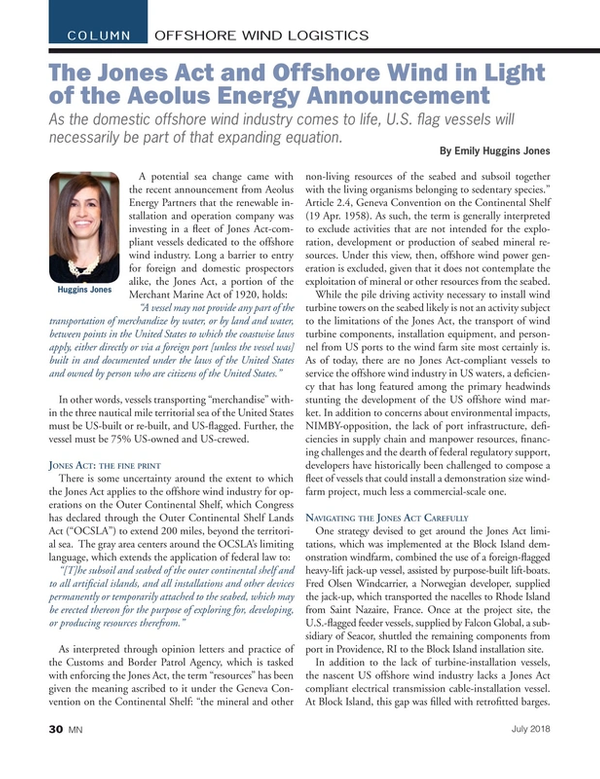 Read The Jones Act and Offshore Wind in Light of the Aeolus Energy Announcement in Pdf, Flash or Html5 edition of July 2018 Marine News