Initial reports show that the towing industry is adjusting well to the new normal on inland rivers. In fact, it is business as usual for most.

July 20, 2018 was a critical date for tow boat operators. That was the deadline for all U.S.-flag towing vessels – over 26 feet, or less if used to assist with transport of oil or hazardous materials – to be in compliance with Subchapter M, the U.S. Coast Guard’s towing vessel safety regulations. It’s been a long time coming. As a regulatory program, the CG finalized Sub M in July 2016, setting a two-year implementation time-line.

As most towing operators know, Sub M is an expansive and dynamic program pertaining to vessel safety and safe operations. Central to Sub M is the Coast Guard issued Certificate of Inspection (COI), the document recognizing and formalizing Sub M compliance and, most critically, permitting the vessel to legally operate for five years, when it must be inspected again.

Anchored in Safety
Sub M’s evolution stemmed from a number of horrific towing accidents almost 20 years ago. These incidents led to Congressional action. The 2004 Marine Transportation bill added towing vessels as a vessel class subject to USCG inspection. Among numerous provisions, the bill authorized establishment of a safety management system “appropriate for the characteristics, methods of operation, and nature of service of towing vessels.”

The bill addressed maximum hours of service and required a demonstration project on “Crew Endurance Management Systems.” Hours-of-service, though, did not make it into Sub M’s final rulemaking. Another new demand was for electronic charts for towing vessels.

The Certificate of Inspection (COI) is the critical, central element within Sub M.  For vessel owners, there are two paths to certification. One is to arrange for USCG inspectors to directly inspect and approve a vessel’s towing safety management system and issue the COI. The second is to work with an approved TPO – third party organization – which can independently document that a vessel meets Sub M’s requirements and, based on that documentation, recommend that the USCG issue a COI.

The American Waterways Operators (AWO) estimates that Sub M adds about 5,600 vessels to the Coast Guard’s marine inspection program. These inspections are being phased in, starting July 20, over the next four years. A company is required to have 25% of its towing fleet inspected each year. By July 19, 2022, 100% of the towing fleet should be inspected. Small operators get a break: if you own just one tow boat the first COI deadline is July 20, 2020. For marine and environmental safety, Sub M is timely, starting when increasing quantities of crude oil and chemicals are being transported by barge due to an increase in domestic production of oil and of natural gas.

Early reports indicate that Sub M implementation is off to a good start; at least among the companies receiving the initial cOIs, both via the more traditional USCG inspection process and via the TPO. On July 21, the Coast Guard announced that it had issued one of the first COIs to Shaver Transportation Company, headquartered in Portland, OR. Earlier, in May, the first of 50 tugs operated by Vane Brothers Company, headquartered in Philadelphia, received its COI, reportedly the second in the nation. Vane used the third-party option, contracting with the American Bureau of Shipping.

Third Party Option
The TPO offers important advantages. For one, the vessel itself is not physically inspected by the USCG, which relies on the TPO’s verification. Plus, the TPO offers a company the chance to work with just one Coast Guard sector rather than within each Sector where its vessels may be working.  If a company’s tugs are working up and down the east coast, for example, the TPO process can proceed within just one locale, avoiding the logistical challenges of tending to separate COI applications in multiple USCG sectors, say Philadelphia and Norfolk and Tampa Bay.  For the USCG, the TPO allows resources to be focused on higher risk vessels and situations.  Overall, the TPO should allow Sub M implementation to move more quickly, both for vessel owners and the Coast Guard.

Of course, the TPO does raise issues. It means the USCG is certifying as safe a vessel it hasn’t seen, just read about. With the TPO, the company being inspected is paying for its own inspection, which can raise questions. The Coast Guard can step in if it suspects that the TPO process is compromised.

The third-party option was an important policy goal for the American Waterways Operators and its member companies. AWO has been working on towing safety protocols since 1994, well before the 2004 Maritime bill. AWO’s Responsible Carrier Program (RCP) and Sub M developed concurrently.  In 2008, compliance with RCP became a condition of AWO membership (AWO actually terminated some memberships because companies did not want to sign-on to the RCP requirement). Given this commitment, AWO worked to establish that a company’s adherence to RCP should signal compliance with Sub M, not just facilitating the inspection process but fulfilling it. In June 2015, AWO received notification that the Coast Guard accepted the RCP as a Towing Safety Management System.

Sub M Arrives; Industry Steps Up
In a July 19 press release AWO welcomed and highlighted Sub M’s startup: “The implementation of Subchapter M is a milestone to be celebrated,” said AWO President & CEO Tom Allegretti. “This is a tremendous achievement, and while it is far from the end of our industry’s safety journey, it is undoubtedly a critical milestone on the way.”

Vane Brothers received their first COI for the tug Brandywine in May. The process took about 12 weeks, from initial filing to certificate. Captain Rick Iuliucci, Vane’s General Manager at Vane’s Philadelphia City Dock facility, said Vane’s COI process formally started early in 2018. Vane is an AWO member and the company selected the TPO, contracting with the American Bureau of Shipping. The RCP was the basic framework for Vane’s safety management system. Beyond this, and where some firms are using outside software solutions to house their SubM documentation, Vane has in-house systems created by its own software engineers that the firm uses for record keeping.

The COI process went smoothly for the Brandywine. But there’s an implicit, critical lesson here: things went smoothly, but that was an outcome built on a lot of hard work; it didn’t just happen. Iuliucci and Vane have been in Sub M ‘prep’ mode for years. The steps to a COI were final steps, hardly tentative or speculative. To the contrary, Iuliucci is confident of plans to bring all of Vane’s tugs into compliance by 2022. Vane will stick with ABS as their third-party contractor.

Iuliucci was asked about challenges going forward. After all, one tug is complete, but there are 49 to go. He said that businesses need to be cognizant of Sub M’s non-stop logistics – 12-13 tugs (for Vane) need to be kept in compliance and pass inspection every year. He said managers “need to be aware that this is constant and start to determine now how to best stagger program requirements among vessels and operations.”
Iuliucci also noted that a COI is not something that gets framed and hung on the wall. “A COI is not carte-blanche for operations,” he said, adding, “It is a process, something to incorporate into a safety system.” He also predicted a much more engaged relationship between the Coast Guard and vessel owners. “You could very well encounter a ‘no sail’ item under Sub M,” he advised, depending on how the Coast Guard might react to more real-time reporting of machinery or equipment failures.  “Those kinds of directions are going to happen under Sub M,” Iuliucci said.  “There will be much more interface with the Coast Guard, much more dialogue, because of the inevitability of maintenance and operational issues which will now be under the review of the Coast Guard.”

Mary McCarthy is Manager of Quality Systems with Canal Barge Company, Inc., based in New Orleans but operating towboats throughout the inland river system. McCarthy said that, between CBC and its Chicago-area fleeting company Illinois Marine Towing, they have over 40 vessels that will receive COI’s over the next four years; two vessels are in the queue right now. Again, though, that readiness is because safety, as a program, is ingrained in CBC’s staff and operations. McCarthy and her team are building on longstanding experience with safety management system principles and inspected tank barges.

“This is standard operating procedure for us,” McCarthy said. Her advice to companies not yet immersed in Sub M is first to establish “internal buy-in. “The culture has to be there. Management’s approach has to be: Safety Management System? Sub M? What do you need?” McCarthy said up front expenditures pay off later.

McCarthy was asked about Sub M as a budgetary item – did it require specific resources and cash, diverting investments elsewhere? “No, most Sub M expenditures for CBC are related to activities we’re already doing under the Responsible Carrier Program. Time and personnel are in place.” Exceptions include new Subchapter M requirements for surveys, i.e., vessel inspections.  For CBC, however, no additional ‘Sub M’ line-items are in the budget.

McCarthy said that there is still plenty of work to be done. This includes understanding the role of the Coast Guard versus the role of the TPOs. “We need a clear understanding of who’s doing what so everyone can use resources wisely and we avoid confusion and bottlenecks,” McCarthy said.  Nevertheless, she added, “overall I think the industry is in a good position.”

Jon Hellberg is in charge of Compliance and Risk Management for Shaver Transportation Company based in Portland Oregon.  Shaver is one of the first towing companies to receive a COI, for their vessel Sommer S, via the Coast Guard option.

Hellberg told MarineNews in August, “Shaver has been very aggressive in incorporating Sub M aspects into our Safety, Quality, and Environmental (SQE) Management System over the years so the foundation was in place.”  In the fall of 2017 the company started making final, detailed preparations. Hellberg and his team utilized ‘in-house checklists’ as well as the USCG’s “Tug Safe” application.  When the company submitted its application in June, it requested an inspection on July 20, which was granted.

Hellberg echoed the need for the same commitment to safety to stay on top of Sub M.  “Getting boats into compliance is the relatively easy part. Growing a company culture of safety and risk assessment is the way ahead,” Hellberg emphasized. Early and frequent communications with the Coast Guard is critical.  Hellberg said that each vessel and operation may present particulars or intricacies that don’t fit neatly into the regulations. “In those instances,” he said, “companies will need to request equivalencies or alternate compliance.” The CG is not punitive, Hellberg commented, “they want to help businesses to succeed and they want Sub M to succeed.”

Tom Ewing is a freelance writer specializing in energy and environmental issues. 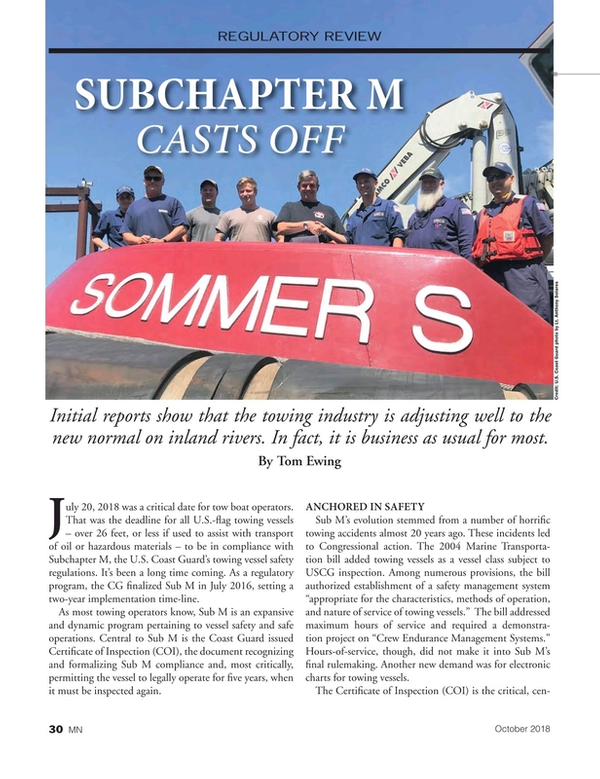