The view from the Bouchard Boardroom and … beyond.

The roots of the now familiar and reliable articulated tug and barge (ATB) business are deep and stretch all the way back to the 1800’s. Along the way, various patents to connect a tug and a barge with a secure mechanical connection were filed. The concept began to gather momentum in the late 1960’s when Edwin Fletcher with ARTUBAR, and the Bludworth family of flexible pushing systems were pioneering efforts to marry the economies of pushing with the safety and seakeeping inherent in mechanically linking the tug and barge at sea. Other systems were developed and tried; not all were successful.

As a baseline, the ATB owes its current market position, in large part to the progression in development of ARTUBAR, and BLUDWORTH in the U.S., and then the landmark ARTICOUPLE system in Japan, followed by the INTERCON system in 1986. The 21st century has now also seen the wide application of the JAK system on small to mid size ATB’s.

Eventually, Robert Hill and his Ocean Tug & Barge Engineering Corporation emerged as the driving force behind the growth of the ATB concept. Hill and OTB are the co-inventors of the Intercon Connection System, now by far the most popular system of many use. In a nutshell, Hill has had a hand in over 70% of the operational ATB’s in service in America – including 80% of those built or converted since 1994. In large part due to Bob Hill’s efforts, the ATB is now a familiar standard in the U.S. flag fleet for coastal, Jones Act and some inland applications. Also prominent in that discussion is Bouchard Transportation Co., and its current President and CEO, Morton S. Bouchard III.

From his first introduction to the concept, Morton S. Bouchard III immediately grasped the notion that ATB's married both low-cost marine transport with reliable marine transport. Barges, of course, had always been a less expensive option to move cargo, but they were also slow, fuel-inefficient, and when bad weather emerged, unreliable. For example, Robert Hill explains that when Mobil first approached his firm to design an ATB for Northeast service, the entire reason to even consider an ATB was weather-reliability. And, they got just that.

Bouchard Enters the ATB Game
If, as Robert Hill insists, the credit for the success of the AT/B is a story of engineering, risk-taking, and a rapid industry-wide acceptance of a concept, then Bouchard Transportation was also one of the first firms to fully embrace the concept. That sort of early adoption is anything but common on the domestic waterfront. At the same time, it has long been a hallmark of the Bouchard brand.

In the early 1990’s, Bouchard was the first company to build double hulls. But, Morton Bouchard III did not yet know of the Intercon Coupler System. While attending the American Petroleum Institute Conference in Chicago, a series of meetings piqued his interest. Referencing that API conference, Bouchard told MarineNews, “I learned about the Intercon system and was interested in understanding why Bouchard did not install this system on the B. No. 230 & B. No. 240. I returned to New York and met with my father, Morton S. Bouchard Jr., who was upset we did not pursue this system for the B. No. 230 & B. No. 240. We then agreed that moving forward all new Bouchard barges would be ATBs equipped with Intercon.”

In 1997, ATB unit Danielle M. Bouchard & B. No. 245 was built, and Bouchard was yet again, the first in the 1990’s to introduce the Intercon system. In fact, the Danielle M. Bouchard was Bouchard’s first 10,000hp ATB tug and the B. No. 245 was Bouchard’s first 250,000 barrel barge. This unit was the first of its kind ever built in the industry. It also began a love affair with the ATB that continues to this day. In a fragmented and wide ranging market, Bouchard now has as many ATB’s under U.S. flag as almost any other operator, and exclusively employs the Intercon system.

Today, Bouchard boasts 22 ATB Tugs, servicing 20 ATB Barges. Bouchard continues to build and further improve its fleet, and the ATB unit M/V Evening Breeze & B. No. 252 were both only recently delivered.

The Evening Breeze, built by VT Halter Marine, is notable in that it is the first tug in Bouchard’s fleet equipped with tier 4 engines. Looking ahead, the ATB Tug Evening Stroll is currently under construction at VT Halter Marine. And, while all Bouchard tonnage is U.S. flag and Jones Act compliant, the firm’s vessels are all ocean load lined, and are able to trade in any region. But, says Bouchard’s CEO, the firm’s primary areas of operation include the North East and Gulf Coast of the United States.

Importantly, 85% of the Bouchard fleet is “connection” agnostic; meaning the tug can connect / couple to any barge. Bouchard explains, “By using the same Intercom system on the various size ATBS in our fleet; we have the flexibility to change tugs in the event of unplanned shipyard maintenance or other issues that may arise. However, we dry dock the ATBS together (both the tugs and barges) for planned/routine maintenance.”

To that end, Bouchard, since its early entry into the ATB markets, always uses the same connection system. “Absolutely, Bouchard does,” said Bouchard, adding, “We always use Intercon; why change something that works and is the best? It is more expensive than other systems to both build and operate, but it is the most reliable and the safest – which is the most important.”

Bouchard’s ATB ‘Business Model’
The ATB ‘business model’ is built – in part – on the economies of reduced manning, increased coastwise flexibility, better speed and endurance in rougher seas (than, as compared to a standard barge tow). Bouchard take on the ATB business model case includes all these metrics, and more. But, says Morton Bouchard III, it’s not all about saving money. Indeed, some aspects of his overarching plan involve spending more today and amortizing those cost to yield greater dividends down the road.

“Bouchard only operates manned barges,” explains Bouchard, continuing, “Although we are now studying the possibility of changing to unmanned barges. However, the manning requirements today are more dependent on a safe operation. The wheelhouse of ATBs today requires an enormous amount of oversight, so Bouchard always operates within or above regulation.”

It’s about safety, too. For example, ending the need to go from the towing wire to push gear by picking up the barge is eliminated – along with all the chances of injury, damage and time – by sticking to the ATB model. And, while achieving better speed and endurance in rougher seas is another advantage, Bouchard insists, “ATB’s do help increase speed and time. However, Bouchard leaves that decision to our Captains.”

When it comes to building the ATB, it is more expensive to construct the barge due to the ladders and ballast. The tugs may be less expensive due to single wheelhouse, but Bouchard still builds all of its tugs with two wheelhouses.

The economy of scale, especially as ATB’s became larger and with increased cubic capacities, is undeniable. But, Bouchard doesn’t see the iconic ATB getting much larger. That’s because, he offers, “If you go any larger, the economics favor a ship, which is where I do see Bouchard going in the future.” That’s an interesting revelation for Bouchard, but necessarily surprising, since the firm has long operated with very much of a blue water SMS system, well prior to the advent of the subchapter M towboat rules. Hence, the Bouchard Safety Management System (SMS) is already in Compliance, but adds Bouchard quickly, “We continue to look at areas of improvement in order to be the safest operator possible. Safety first and foremost is the only Bouchard way. Bouchard’s safety program is simple: There is no budget for safety.”

Clearly, Bouchard believes in the ATB, and his firm is heavily invested in its use. But, like everything else on the domestic waterfront, international market pressures and current events have a way of impacting even the best laid plans. Bouchard looks at today’s markets with guarded optimism. “The market as we see it today is overbuilt. When President Obama opened up crude exports, it certainly hurt the Jones Act. I understand why crude exports were opened, but the market is soft. Now it is getting tighter every month there is less building and more scrapping. Bouchard’s fleet is well positioned in this market.”

The Iconic ATB: Safely Here to Stay
As of February 2017 – and no doubt these numbers have further expanded – the U.S. flag ATB fleet totaled 1,530,916 gross tons and a whopping 18,916,471 barrels in total cubic capacity, spread out over more than 175 units. That’s come about because of many factors; some, to be sure, rooted in sound economics. But, that also comes with a remarkable safety record. That’s something that Morton Bouchard III takes to heart.

“We maintain our vessels above and beyond regulatory standards and perform safety management audits and inspections regularly ... There is nothing more important to me than running a safe operation.  The only way to be profitable is through a safe operation, and we all believe in the philosophy – safety is first and foremost, and the only Bouchard way. This is instilled across our entire fleet, in every crewmember and in every shoreside employee,” Bouchard told MarineNews.

Firmly anchored in the economics of the coastwise trading model, the ATB business model is at the heart of Bouchard’s business today. That’s not likely to change any time soon. That said, the possibility of a blue water, deep draft vessel addition to the Bouchard fleet, as hinted at by Mr. Bouchard, could well bring about an interesting twist to that formula. Until then, however, Bouchard remains a leader in the ATB game, and probably, always will.

(*) This article first appeared in the April 2019 print edition of MarineNews magazine. 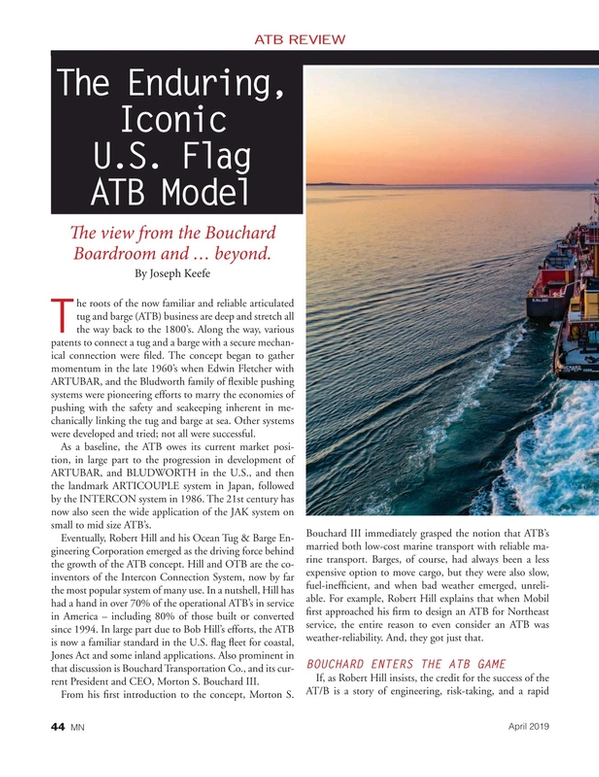