In November the U.S. House of Representatives’ Transportation & Infrastructure Committee, Coast Guard and Maritime Transportation Subcommittee held a hearing on “Commercial and Passenger Vessel Safety: Challenges and Opportunities.” Testimony covered a range of issues, from recent tragedies such as the Conception dive-boat disaster to antiquated maritime laws.

Since the hearing, new safety legislation was introduced on December 12. Calif. Senator Diane Feinstein and Rep. Salud Carbajal, from California’s 24th District, the location of the recent Conception dive boat disaster, submitted bills “to require the Secretary of the department in which the Coast Guard is operating to prescribe additional regulations to secure the safety of individuals and property on board certain small passenger vessels” (S. 3042 and HR 5413).

Passenger safety was a headline issue in November when inspectors with Coast Guard Sector New York determined that 23 New York Waterway ferries had damage or discrepancies significant enough to warrant suspension of service, including structural damage affecting watertight integrity. Most ferries were returned to service by December 17.

During the Subcommittee hearing, maritime disasters and official agency follow up received priority attention. Representatives pointedly commented that most of the time that meant no follow up.

The September 2 Conception disaster, which killed 34 people off the coast of Santa Barbara, was a top issue. It was cited both as a singular tragedy and as one more sad example in a long line of maritime disasters despite years of Congressional efforts at prevention, at safety.

Rep. Carbajal asked Coast Guard Rear Admiral Richard V. Timme why the Conception was operating under outdated safety regulations. He charged the Coast Guard with a “record of inaction,” adding:

“I am particularly concerned by the fact that the NTSB has continuously—for many years—advocated for the Coast Guard to implement procedures for conducting regular inspections, reporting maintenance needs for all of a boat’s system and crew training. Yet the Coast Guard has ignored many of these recommendations.

“What actions has the Coast Guard taken to make sure those recommendations are implemented, and why have they not been implemented to date?

Timme said the Coast Guard is looking “forward to a full and complete report from the Marine Board of Investigation,” due in 2020. Timme said the Coast Guard does work side-by-side with NTSB. But the Coast Guard, he told Carbajal and the Subcommittee, has to take a recommendation and move it into a “different framework,” a different context that includes rulemaking, workforce “and the ecosystem it would go into.” He added that the Coast Guard, in response to the Conception tragedy, has “chartered a team,” separate from the Marine Board’s work, to investigate the entire class of Conception-type vessels. This report will follow a 30-day “inspection campaign” of those vessels. It will recommend changes, including a re-look at past NTSB recommendations.

The references to NTSB recommendations was a sore point for the Subcommittee. Members expressed frustration with delays – measured sometimes in decades – between post-accident safety recommendations and actual implementation, or not. 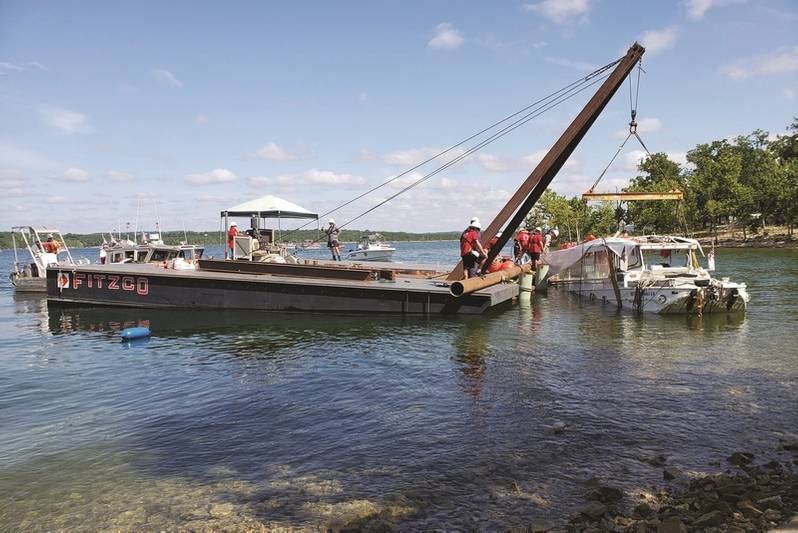 Curtis’ answer: yes, the legislative recommendations would increase safety and passenger survivability. Indeed, Curtis referenced the bill as something of an “endorsement.” After all, he added, the legislative ideas are very close to what NTSB proposed for DUKW boats – 20 years ago.

This concern with inaction, with lost time, was highlighted in opening remarks by Subcommittee Chair Sean Maloney (N.Y.-18th) who said he “shares the NTSB’s concerns. The Coast Guard is making a critical mistake by not acting more assertively on (NTSB’s) recommendations.” Maloney was present for just part of the hearing. He did not indicate how the Subcommittee might establish a more aggressive Coast Guard-NTSB link or otherwise follow up after the hearing.

Vessel inspections were another priority focus. A big concern, of course, is who does the inspections – the Coast Guard or an approved third party, as is currently allowed with towing vessels. This impacts a more fundamental issue: Coast Guard resources, personnel and funding. Ranking Member Bob Gibbs (Ohio-7th) noted that since 2004 nearly 75,000 vessels have been brought under the CG’s security domain but, he added, the agency “has received virtually no additional resources to carry out its work.”

But critically, and this is a core concern, Stephens said that “PVA’s efforts to promote safety by passenger-carrying vessel operators depend heavily on an engaged, well-trained, and adequately-funded Coast Guard Marine Safety Mission.” She said that direct Coast Guard contact is “essential and has successfully promoted safety. It is imperative that the Coast Guard safety function be preserved” (emphasis added).

Bottom line for Stephens and PVA: Congress should not move to policies that would allow third-party passenger vessel inspections. She said that “PVA adamantly believes that this would be a mistaken policy,” allowing a gap to develop in the CG’s knowledge-base of the U.S. passenger fleet. Third-party organizations, Stephens writes, such as classification societies, don’t have expertise regarding smaller passenger vessels operating on domestic routes. She testified: “The current commitment to direct Coast Guard inspection of domestic passenger vessels is the preferable policy and is the best way to promote safety.”

Aaron C. Smith, President and CEO of the Offshore Marine Services Association (OMSA), stressed another way to home in on safety: through stronger and consistent Jones Act enforcement, the legal requirement that ships in American waters are American owned, American built and American crewed.

Smith said that Jones Act enforcement continues to slip because of a series of informal rulings, starting in 1976, by the U.S. Customs and Border Protection (CBP). These rulings have “allowed foreign vessels to do work the Jones Act reserves for U.S.-flagged vessels,” Smith said, adding that these rulings benefit foreign companies, foreign ships, and foreign mariners to the detriment of U.S. mariners, shipyard works and U.S. taxpayers. “It also increases the number of vessels on our OCS (outer continental shelf) that comply with a lower safety standard,” according to Smith.

As readers likely know, after 43 years, these CBP rulings have evolved into their own legal and regulatory subspecialty. The Subcommittee did not indicate how or whether it might follow up on these contentious – and complicated – issues.

The final panelist was Paul Sterbcow, President, Louisiana Association for Justice. Sterbcow is an attorney based in New Orleans, specializing in maritime liability. He is a co-leader in the liability trial arising out of the 2010 Deepwater Horizon explosion and oil spill.

Sterbcow said that to get to the real weakness in maritime safety Subcommittee members need to look deeper, and in a different direction, than just Agency oversight.

“My experience in the marine environment is that safety is a product of accountability, pure and simple,” Sterbcow told the Subcommittee. Whether the focus is a $100 million drillship or a jet ski at the beach, “the goal must be to protect people and that goal is only reached by holding those responsible accountable,” he said.

Sterbcow cited two federal laws and one policy which are particularly problematic:

Sterbcow explained that LOLA, passed in 1851, and largely unchanged since then, limits a vessel owner’s liability to the value of the vessel and freight after an accident. He said that limit made sense in the mid-19th century when control of a ship was more art than science. Without such protections America’s fledgling oceanic commerce would have withered.

Now, Sterbcow asserts, “encouragement of investment in shipbuilding should no longer be accomplished on the backs of victims of maritime torts.” In the age of international corporate vessel ownership, marine insurance, contractual claim limitation and technology that provides ship owners the ability to retain complete operational control over vessels at sea, “it is patently unfair to penalize those injured and the families of those killed in shipboard catastrophes,” Sterbcow testified.

Sterbcow placed the Conception disaster and the Branson, Mo. DUKW boat disaster within this limited liability context. With the Conception, he noted that three days after the accident, “while bodies were still being recovered by the Coast Guard,” the owners filed a Petition for Exoneration and/or Limitation under LOLA in federal court in California, “to limit their exposure to the value of the vessel after the casualty, which is $0.00.”

With the Branson tragedy Sterbcow said that excursion “should never have occurred as the duck boat owner had ample warnings of approaching severe weather.” Sterbcow said the boat’s owner was in direct and constant communication with the crew. Anyone with a cell phone could have obtained real time weather and lake conditions. “The fact is,” Sterbcow concluded, “this disaster was easily foreseeable and readily preventable. Yet, the vessel owner has used LOLA to try to limit its liability to the families of seventeen drowned passengers to $0.00.”

In follow up discussion, Rep. Carbajal stated that LOLA has outlived its purpose. He asked Sterbcow how federal laws might be changed. Sterbcow cited precedence when Congress, in 1996, carved out the DOSHA commercial aviation exception. This occurred after the TWA airline crash 12-miles off Long Island, killing a group of students. Before the change, parents could not proceed with recovery claims beyond funeral and burial expenses. “My suggestion is simple,” Sterbcow said, “extend that exception to all disasters under DOSHA. There’s no reason to treat a plane disaster different from a boat disaster. And after all, the vast majority of these cases involve vessels and not airplanes.”

Carbajal thanked Sterbcow for that “thorough answer,” (his emphasis). The hearing closed shortly after. As noted, no indications about follow up on these critical issues. 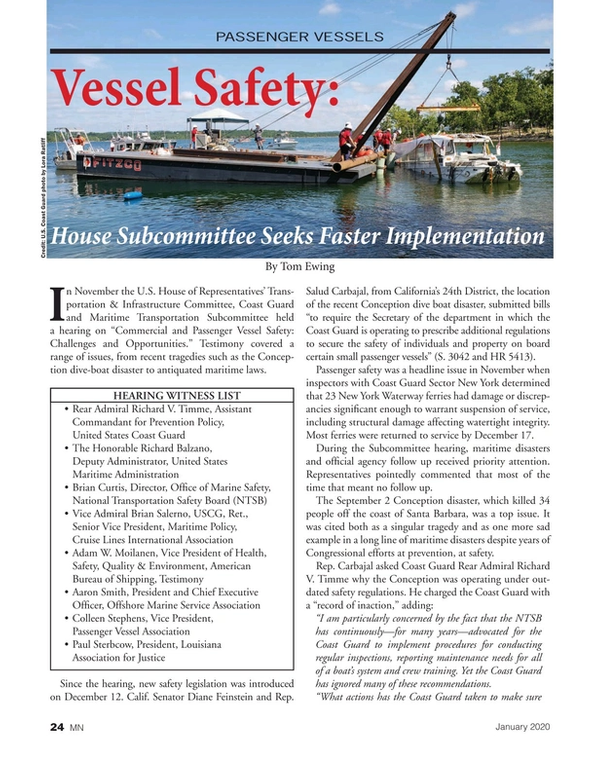