Based in Aberdeen, Elaine Maslin is MTR’s ‘eyes & ears’ on the ground scouting new tech for our pages. Her mandate for the MTR100 was simple: ‘find five companies to watch closely in 2019.’ This is what she found.

Forssea: Leveraging Machine Learning & AI
Machine learning and artificial intelligence have made a huge impact on our day to day lives, from image recognition in Facebook to cars parking for themselves. These technologies are entering the subsea space in various shapes and forms.

Paris-based Forssea Robotics is a subsea robotics and research and development (R&D) startup company, set up in 2016 to reduce operating costs in the ROV market. Forssea was launched at France’s Ecole Polytechnique as a spin-out from ROV operator Searov Offshore, now part of DeepOcean, which brings offshore experience to Forrsea’s R&D.

Forrsea is designing, building and qualifying a new autonomous ROV called ATOLL. It is designed to use machine vision technology to dock on subsea infrastructure. Because vision-based technology is critical to the autonomous docking of ATOLL, Forssea has developed a range of vision-based products, ranging from low-cost Ethernet cameras, adapted to augmented reality applications, to an enhanced vision product called ‘Polar X’, which improves the visibility factor and target identification in turbid underwater conditions by a factor of three.

Forssea’s most recent development is V-LOC, which uses QR code markers on subsea assets and a Smart camera on ROVs, supported by specialist computer programming, to obtain real-time positioning with six degrees of freedom measurements displayed between the ROV and the asset or two separate QR code marked assets.

A major operator recently trailed V-LOC in West Africa. Target markers were installed on a subsea Xmas tree and rigid Jumper and real-time positioning data was acquired through the ROV camera to aid the ROV pilots and optimize vessel positioning during the installation and landing phase of the subsea assets.

The firm’s primary focus will continue to be the development of artificial intelligence technologies for the subsea environment.

Houston Mechatronics: Robots in Disguise
Innovation and disruption are often seen as two sides of one coin these days. Houston Mechatronics, Inc. (HMI) comes under at least one of those titles. The firm is a Houston-area startup subsea service company, founded in 2014, by former NASA roboticists.

The company’s business model is Robotics as a Service (RaaS) – in itself a new concept within the subsea industry – which uses what HMI calls its in-house full stack robotics capabilities. HMI’s first investor was oilfield services giant Schlumberger (2015), while drilling firm Transocean led HMI’s most recent Series B investment (2018), giving some idea of the interest in the firm.

HMI’s first splash is the Aquanaut, a subsea service robot that can perform long range yet meaningful in-close manipulation tasks over low bandwidth networks, eliminating the need for surface ships. To accomplish this, Aquanaut is an all-electric underwater transforming vehicle, i.e., it can transform between being an autonomous underwater vehicle (AUV) and a remotely operated vehicle (ROV) with work class manipulators. The vehicle, in prototype stage, can efficiently transit long distances and conduct conventional AUV-based sonar and visual surveys and when the vehicle is required to manipulate something, the system initiates a subsea transformation, which exposes two 1.5m eight degree of freedom manipulators.

This affords HMI to transition ROV operators to a higher cognitive and a more value added supervisory role, according to HMI. No joystick manipulation of the vehicle or its manipulators is required and as such HMI’s motto for Aquanaut is ‘mouse clicks not joysticks’.

Led by Aquanaut, HMI says it intends to continue developing novel subsea capability and other robotic technology for use in oil and gas and defense applications with an objective to increase reliability, efficiency, capability and safety.

Stinger Technology: Small But Well Formed
Stavanger, Norway, based Stinger Technology, is something of a boutique firm in the subsea space. It’s a small firm – with seven staff – but this year it’s been making ingress into subsea docking station technology, with support from Norway’s Equinor (previously known as Statoil).

Stinger designs and produces solutions focusing on lightweight and cost efficient subsea systems, for subsea intervention and monitoring, with a strong focus on systems that can access confined spaces, mostly for the offshore oil and gas sector, but also the fish farming and shipping industries.

The firm has been in the subsea business since 2003, when it started out by developing a soil sampling system, called the Soil Stinger. It’s since been leading, in Norway, the use of small and flexible remotely operated vehicle (ROV) systems for tasks traditionally performed with larger systems and dedicated vessels.

Stinger’s recent projects include development of an underwater docking station, a project Stinger is working on under a contract with Equinor. It is being designed to support any subsea resident vehicle, or underwater intervention drone (UID), a term Equinor is using for the project.

The 9m-long UID docking station would be modular and could be a standalone station or retrofit inside a production template. It would include a vehicle “landing plate” and a tool induction plate, for various interchangeable tools and sensors for resident vehicles to use. Equinor is planning a number of test installations with this system offshore at the Åsgard field and at inshore locations, as part of qualification work.

These would have Lego-like inductive power supply and wireless communication connection points for vehicles to plug into, which will also mean operations rooms onshore will see live what tools are in place and how well charged they are, etc. The docking station would also have batteries, a bidirectional smart charger. The UID docking station also has a “little sister” design, which could act as a bolt on subsea power socket for tooling or systems where needed.

Other recent projects include a cavitation cleaning robot, a short and long-term deployable Videoray ROV garage system with tether management system, and an autonomous net cleaning robot for the fishing industry.

WiSub: A Subsea Thor
Bergen, Norway, based tech-focused firm WiSub is hoping to create a storm with its pinless wet-mate connectors.

Formed in 2011, the firm made a splash with its Torden (meaning Thunder and alluding to Thor, the roman God that the Vikings believed caused Thunder and lightening), a wet-mate connector, which is able to transfer 24v DC 1,000 Watt of power across a 0-10mm seawater gap, alongside 100 Mbps Ethernet and serial data transfer. Developed for the subsea market in general, one of its initial goals, in collaboration with NOV, was to increase connection reliability between a blowout preventer and lower marine riser package during subsea well intervention operations.

WiSub’s connectors use high-frequency microwave communication electronics to transfer data at high speed and use inductive resonance to transfer power, as they can coexist without interference. Using induction and microwave electronics also means the connectors have axial freedom and wide angular misalignment tolerances and don’t face wear issues – unlike traditional pin-based wet-mate connectors. The ethernet and serial communication interfaces also allow the use of a variety of market-ready available converters.

WiSub’s mantra is that it is “changing the way the subsea industry thinks, connects and communicates,” and it’s making steps towards that goal, in subsea oil and gas, but also other applications, including military.

For example, the Maelstrom connector has recently been used in the U.S. defense market for autonomous underwater vehicle (AUV) docking, including for large clients operating in the aerospace and underwater autonomous systems domain.

In the oil and gas space, Brazil’s University of São Paulo recently purchased a Maelstrom connector and a major operator on the Norwegian Continental Shelf has ordered WiSub’s Fonn connector to use as part of an underwater resident vehicle pilot project offshore Norway. WiSub has also been supporting Cellula Robotics’ Imotus subsea vehicle testing and deployment with its connector technology.

As wireless subsea power and data transfer grows in use, standardization will become increasingly important. WiSub is in the second year of a two-year research and development project to standardize on AUV pinless electrical power and data communication interface. WiSub equipment was deployed earlier this year with project participants; primary charging interfaces are now under development for delivery later this year. Expect more to come from WiSub.

The firm, founded in 2001, near Vancouver, Canada, initially focused on hard rock mining robotics, but then moved into the ocean space, developing seafloor mining robotics systems and then seafloor drilling systems. One of its latest projects, however, is a hovering AUV technology and fuel cells for long-range, long-endurance AUVs.

It’s a natural progression for Cellula, whose founder Eric Jackson’s background is in AUV technologies. For more than 20 years, Jackson worked at International Subsea Engineering, also near Vancouver, working on submarine control systems and AUVs and project management.

Under Jackson, Cellula has developed the Imotus AUV; a hovering AUV, able to work on a tether, but also jettison the tether, should it become entangled, and then recover itself to a docking station, where it will download data and recharge. Imotus is being developed for visual and non-destructive testing, e.g. ultrasonic thickness (UT), inspection work in confined spaces, such as inside the concrete legs of oil platforms.

The unit is quasi-spherical, 0.8m-diameter, with cameras (HD video and still), UT sensor, cleaning brush and navigation equipment, including a low-resolution sensor for mapping. Subsea lidar is also planned. Unlike traditional AUVs or ROVs, Imotus’ primary mode is to hover relative to something, using its inertial navigation system and simultaneous localization and mapping (SLAM) algorithms. Control is based on a mission plan or commands, eg. go down 10cm, turn 10 degrees, or go to port. Cellula, which started to design the Imotus system in February 2017, did its first demos in November 2017, in Vancouver, which included holding station, waypoint tracking, maneuvering around obstacles, autonomously findings its docking station, then docking, uploading data and recharging using Sonardyne technology and WiSub pin-less connectors, respectively. It was then due to perform work in the North Sea this year.

Meanwhile, Cellula is also working on onboard fuel cell technology for long-duration, long-endurance AUVs. The fuel cell system will incorporate a novel hydrogen peroxide oxygen delivery system. Complementary to the fuel cell is a suction anchor system so that a fuel-cell-supported long-duration AUV doesn’t need to dock to something to sit on the sea floor, it can just sit on the sea floor, where it can rest and listen.

“Robotics is an extremely interesting field to be working in,” says Jackson. “Subsea robotic applications add another element to the challenge. It’s definitely not a consumer business. It’s not a race to the bottom, it’s more about trying to solve problems, how to make innovative things that are going to make someone else more competitive.

“And I think the market for AUVs is going to increase and there’re continuously new applications for AUVs arising,” adds Jackson. “There will be a lot more opportunities, different shapes and sizes and pay loads.”

Cellua has about 25 staff plus a network of contractors, with offices in Vancouver and the U.K., and agents globally. It also has two joint ventures: Ocean Floor Geophysics, a subsea geophysical firm, which owns and operates AUVs with and has its own sensor development and data processing group; and Subsea Geo Services Inc., set up to operate Cellula’s seafloor drills on behalf of clients. 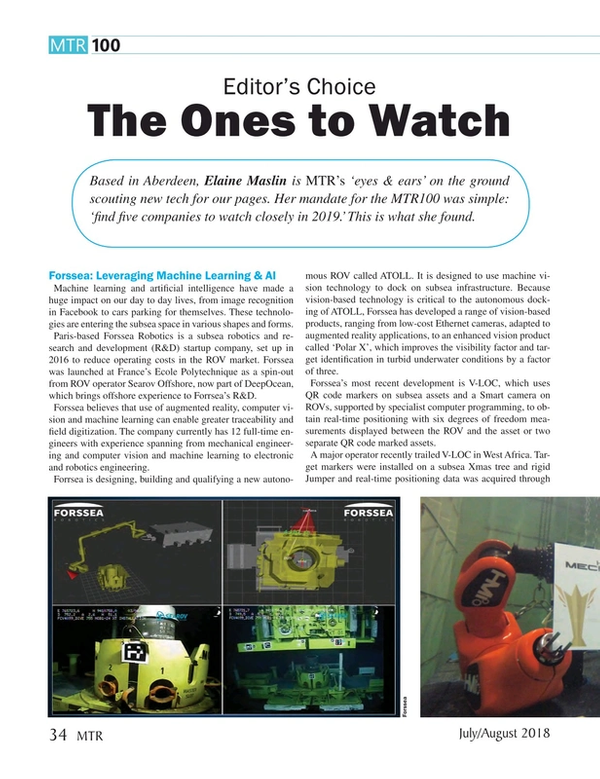 Read MTR100: The Ones to Watch in Pdf, Flash or Html5 edition of July 2018 Marine Technology