The American Spirit, a supertanker built by Bethlehem Steel Corporation for Gulf Oil Corporation at a base contract cost of approximately $81.4 million, was christened recently at the steel company's Sparrows Point (Md.) Yard. Mrs. Jerry McAfee, wife of Gulf's chairman of the board, officiated at the noon ceremony with the traditional bottle of champagne.

The American Spirit is the first of two supertankers being built by Bethlehem Steel for Gulf Oil.

Her sistership, the American Independence, is expected to be delivered in late summer or early fall of 1977.

The supertanker will leave immediately for the U.S. West Coast to go into service between Port Valdez, Alaska, and offshore of the Panama Canal west coast. She will transport crude oil from the Alaskan pipeline for transfer to smaller vessels at the Canal for shipment to Gulf Coast ports.

The 1,100-foot vessel, carrying 2,014,000 barrels of oil, representing 98 percent capacity, will travel at a speed of approximately 15 knots. She is one of Bethlehem's 265,000-deadweight-ton class, the largest merchant vessels ever constructed in the United States.

The keel for the American Spirit was laid July 17, 1975. The supertanker was constructed according to requirements of the American Bureau of Shipping, U.S. Coast Guard, U.S. Public Health Service, and the Federal Communications Commission.

Principal characteristics of the vessel include one complete deck with raised forecastle head, cylindrical bow, horn-type rudder, straight transom stern and an after-superstructure.

The American Spirit is equipped with the latest navigational, safety, communications and antipollution aids. She was designed to meet the requirements of the October 1971 resolution of the Inter-Governmental Maritime Consultative Organization (IMCO) regarding maximum size of cargo tanks.

Clean discharge water will be assured through use of a slop tank system utilizing two of the cargo tanks and an oil/water separator.

Instrumentation to detect oil in the ballast water being pumped overboard will give an audible and visual alarm, with automatic immediate shutdown capability.

Protection in the cargo tanks will be furnished by an inert gas system which will provide a constant nonexplosive atmosphere within them.

Protection against water pollution when the vessel is in coastal waters or in port will be provided by a sewage treatment plant and a large sewage holding tank.

Navigation equipment includes an echo depth sounding and recording system, a 10-CM radar, a 3.2-CM radar and a collision avoidance system capable of operating with either radar. A radio direction finder, a Loran receiver and a satellite navigation receiver are also furnished, as well as the latest computer type Omega system.

Communication equipment consisting of the main and emergency telegraph console is installed in the ship's radio room. The vessel also has a VHF radiotelephone and a single sideband radio transceiver system with operating capabilities from the pilothouse.

A VHF transceiver system for communications with the terminal during cargo-handling operations is installed in the cargo control room.

The vessel's clean ballast water capacity in four tanks is more than 32,000 tons; and the supertanker's] 11,950-ton fuel capacity provides a cruising range of 20,000 miles.

In addition to the second Gulf ship under construction, the Sparrows Point Yard is also building a U.S. Navy drydock and two 27,- 340,000-deadweight-ton containerships.

After the christening, Donald T. Burkhardt, Sparrows Point Yard general manager, was the host at a luncheon in honor of the sponsor, Mrs. McAfee. 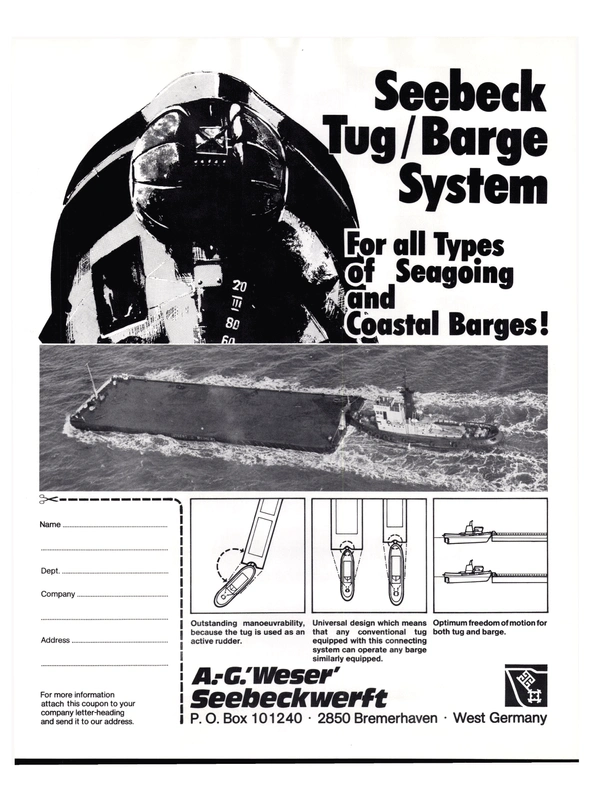