The pier, which will be used for repair of larger vessels than could be serviced by Norshipco in the past, will also serve as a mooring pier for Norshipco's $15- million steel floating drydock, now under construction in Brazil.

John L. Roper III, Norshipco president, said that the firm has added 300 workers in the last few months because of the expansion program, and that he expects the new pier and drydock to double Norshipco's annual sales within the next 10 years.

He said: "We recognized that with the larger ships entering Hampton Roads, and with those on the drawing boards and under construction, it was necessary for Norshipco to expand our facilities to remain competitive in the world market." N o r f o l k Mayor Vincent J.

Thomas said: "The new facilities here, when completed, will make Norfolk Shipbuilding and Drydock Corporation competitive with every shipyard in the world. We cannot stray from the fact that this area's greatest future lies in its port and maritime commerce industries." Earl J. Shifflet, Virginia's Secretary of Commerce and Resources, also spoke at the dedication, calling the pier and drydock "a supplement to the $8-million in port improvements contained in the state bond referendum." Earlier this year, Norshipco announced a multimillion-dollar six-year contract with El Paso Marine Company, a subsidiary of the El Paso Company, Houston, Texas, for annual drydocking and repairs to liquefied natural gas (LNG) carriers. The contract with El Paso is for nine 125,000-cubicmeter LNG carriers, each approximately 940 feet long with a beam of 140 feet. Shipbuilder for the first three LNGs is Chantiers de France-D unkerque, Dunkerque, France; for the second three, Avondale Shipyards, Inc., Avondale, La.; and the final three, Newport News Shipbuilding and Drydock Co., Newport News, Va.

Norshipco currently has under construction a 58,000-ton steel floating drydock, to be among the largest and most modern in the world. The $15-million drydock is being built by the Brazilian shipyard Ishikawajima do Brasil-Estalieros S.A. (Ishibras).

The steel floating drydock will be 950 feet long, 160 feet between wingwalls and have a lifting capacity of 58,000 long tons. It will be equipped with automatic sensing and deflection instrumentation to insure the ultimate in safe drydocking.

The drydock will have the latest automatic cleaning and painting equipment, assuring that high-quality work can be done very quickly. This equipment is designed to produce very little or no disturbance to the environment.

Completion of the new pier is the first phase in the expansion of Norshipco's Berkley Plant. The pier was built by Tidewater Construction Corporation, Norfolk.

The drydock will be moored adjacent to the new pier and parallel to the channel of the Southern Branch of the Elizabeth River, allowing ships up to 1,200 feet long with a beam of up to 160 feet to enter the drydock directly without turning.

A booklet describing the new facilities can be obtained by writing to Frederick A. Ganter, Norfolk Shipbuilding and Drydock Corporation, 17 Battery Place, New York, N.Y. 10004. 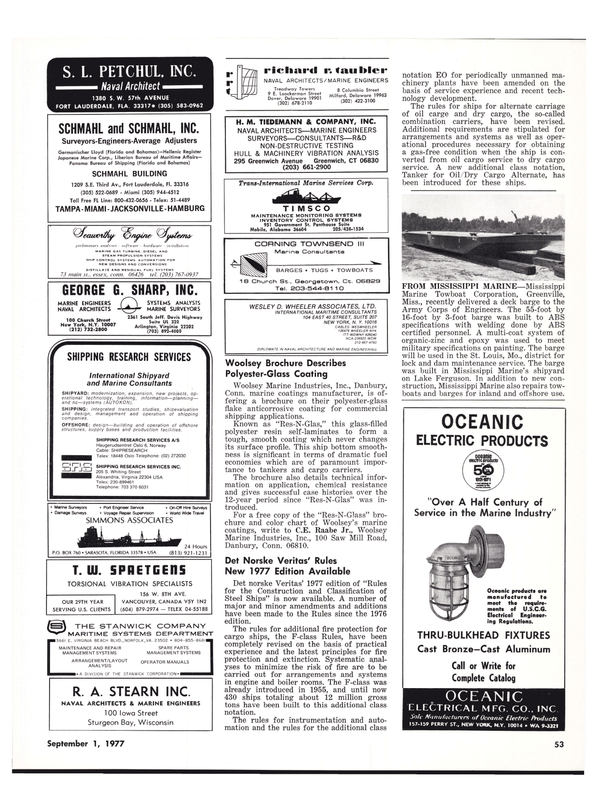