Harland and Wolff shipyard in Belfast, Northern Ireland, is to build a new $21-million ferry ship for operation on the British Rail Irish Sea service between Larne and Stranraer.

The 7,000-ton multipurpose vessel has been designed to carry 600 passengers in addition to 300 motor cars, or 60 commercial vehicles (or a mixture of both). She will have a crew of 59.

In order to speed the loading and unloading of vehicles for the short sea route, the new ferry will be fitted with two vehicle decks which can be operated simultaneously.

Vehicles will be laded via a double-decker loading ramp located at the bow of the ship.

She will also be fitted with twin bow thruster propellers, twin stern rudders and fin stabilizers.

The vessel is due to be delivered to British Rail in time for operation on the route during the peak summer period of 1979.

With an overall length of 423 feet (128.8 meters), the new ship will have a service speed of 19 knots. Because it will have a greater draft of 15 feet (4.57 meters) than vessels currently using Stranraer Harbour in Scot- land, dredging work will be necessary.

In addition, a new berth for the ship will be constructed.

A British Rail shipping service has been operated between Stranraer and Larne since 1862.

Currently on the service are two multipurpose vessels, the Antrim Princess and Ailsa Princess, and two chartered freight ships. 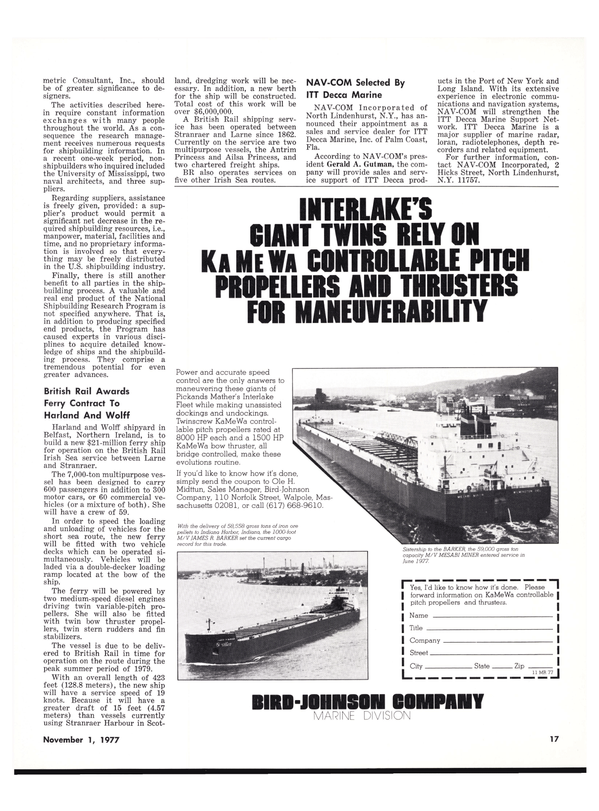