Future Opportunities And Problems Of The Barge Industry

The energy and cost effectiveness of barging supports an upbeat outlook for the industry, but "nothing succeeds without effort and nothing can be taken for granted," a leading barge executive said in speaking to a Houston, Texas, Marine Insurance Seminar.

Archie L. Wilson, president of Dixie Carriers, Inc., said he agreed that the expansion of coal production "has been sharply oversold to the public." He said that the near-time substitute for natural gas for electric utilities would most likely be residual oil.

"Our studies indicate to us that, for the next several years, movements of residuals will continue to increase very dramatically.

Some of this increase will come from importation of residuals. We can all agree, I think, that abundant cheap natural gas will no longer be available and for the immediate future, residual oils are the only practical substitute, and barging residuals the best method of transport," Mr. Wilson said. He reported that he was converting barge equipment to carry residual oil.

Reviewing some of the industry's problems for insurance executives meeting at the Houston Oakes Hotel, Mr. Wilson singled out the lack of stability in insurance. "Of great concern to the barge industry is the tendency of many insurance companies to vacillate more today than ever before. They go in and out of markets and, from the operator's vantage point, there seems to be little stability," he said.

"When insurance coverage is required and one is told that coverage is not available at any price — that the companies have made a decision to stop writing that coverage — that is pretty bad. I think Dixie is a good company with sound operating procedures, and that has happened to us," he said.

Mr. Wilson commented that liability for spills can be "frightening." He asked whether exposures and penalties have become so great "that the government should either offer insurance or offer some other solution." He cited an instance involving an accident by his company where the Coast Guard found Dixie "not willfully or knowingly negligent," but tried to collect $954,000 in cleanup costs two years after the matter was thought to be closed. Mr. Wilson said the cleanup contractor recovered only 16 barrels of oil. "In fact, the water was running so fast that the cleanup was futile and a total waste of everyone's time and money." Uncertainty as to the government's position on such matters is a major problem, Mr. Wilson said.

Mr. Wilson supported the compromise bill, H.R. 8309, for a 4-cent fuel tax on the inland rivers linked to both a study of impact and the go-ahead for the reconstruction of Lock and Dam 26 at Alton, 111.

"Water resource management, of which navigation is only one part, has been one of the government's most successful programs.

The co-products of navigation — flood control, irrigation, hydroelectric power, recreation, stream flow maintenance, enhancement of fish and wildlife — and navigation itself will be more badly needed in the future than they have been in the past. Our growing population, our growing industrial and agricultural strength all depend on efficient management of a limited and nonexpandable supply of water," he said.

Mr. Wilson pointed out that the taxing power could conceivably be used to destroy the natural advantages of water transport to conserve energy and fight inflation, but he doubted that it would be so used.

"The capabilities for foolishness by government have been well enough demonstrated on all fronts, however, to make necessary a major current effort by many water-related interests, barging among them, to demonstrate once again the soundness of nearly 200 years of national effort in the water management field.

"As the economy expands, barging can be expanded with less private and public investment than that of any other mode. But nothing succeeds without effort and nothing can be taken for granted," the Dixie Carrier executive said. 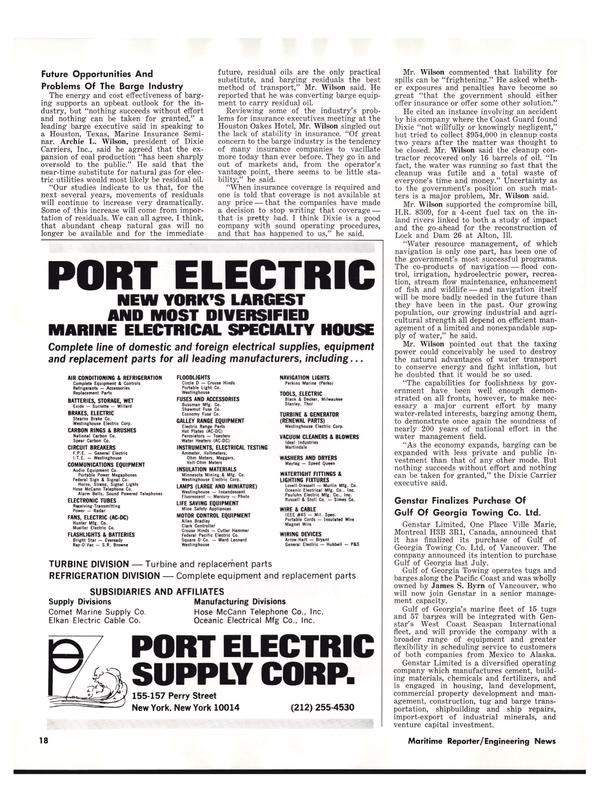 Read Future Opportunities And Problems Of The Barge Industry in Pdf, Flash or Html5 edition of November 1977 Maritime Reporter