The last stage in the construction program of this massive dock, located at Manama, Bahrain, Arabian Gulf, was s u c c e s s f u l l y completed on September 16, 1977, when the drydock was emptied for the first time by its own pumps. The dock gate, following its voyage from Portugal, had been installed a number of days earlier. If it had not fitted or worked perfectly, the opening of the yard could have been put back by weeks, but all went smoothly.

The three centrifugal pumps can empty the dock without any vessel in it in only 3y2 hours.

When a VLCC is being docked, the time will be well under 2 hours.

To test the dock and its services before taking the first commercial vessel, two of ASRY's own fleet were docked on September 23, 1977. The 10,000-dwt barge, the Tartaruga, and one of ASRY's six 32-ton-bollard-pull tugs, the Arad, were docked simultaneously.

The hulls of both vessels have been cleaned and painted, while the barge has also had its hull surveyed by Norske Veritas.

By the end of September, with the dock completed for the largest of vessels, ASRY was ready for its first commercial docking.

The ASRY drydock has been completed and is working less than three years since the laying of the cornerstone on November 3, 1974.

For a complete description of ASRY's facilities, write to K.M. 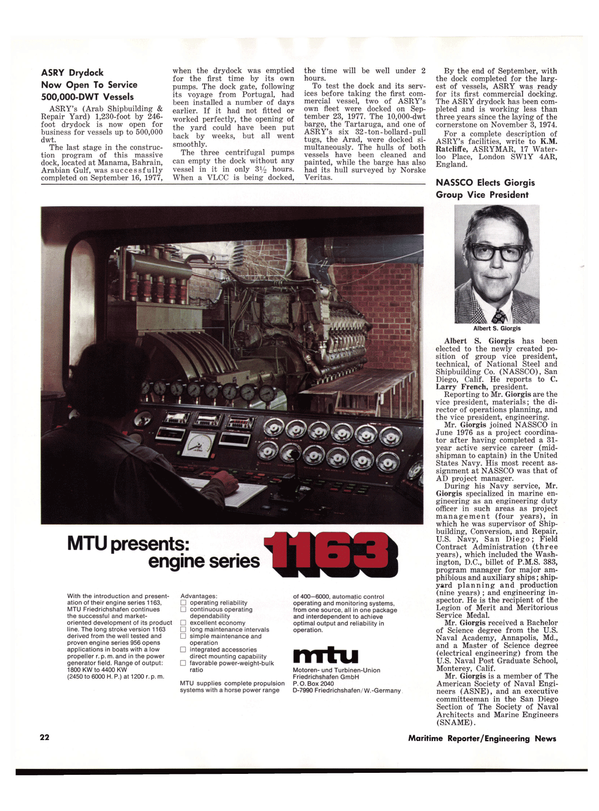