A new emergency oil spill control organization for the Port of New York has been formed at Perth Amboy, N.J.

The company, Clean Venture, Inc., will provide quick-strike coverage of the entire harbor from bases in New York and New Jersey for oil spills of any size.

This first-of-a-kind effort represents a commitment by a group of established spill contractors from other areas of the country to provide the harbor with the special kind of services it needs as the largest petroleumhandling port in the nation.

John J. Gallagher, a veteran of many of the major marine-related spills in the harbor and the executive director of Clean Venture, designed the company's operations to implement a comprehensive port-wide spill control system previously devised by the founding companies. Gary E. Wagner, formerly operations manager for Jet Line Services of Boston, Mass., will head up Clean Venture as vice president and general manager.

The companies forming Clean Venture are Sealand Environmental Engineering, Inc. of Milford, Conn., Industrial Marine Service, Inc. of Norfolk, Va., and Jet Line Services, Inc. of Boston. They will join with Reynolds Shipyard Corporation on Staten Island, N.Y., to provide a considerable reservoir of experienced men, equipment and facilities for the Port of New York.

The new company, with a prime capability in emergency spill control work, will also provide services in the areas of tank cleaning and tank farm maintenance, pollution control systems design, installation and maintenance, as well as liquid waste handling and disposal for the petroleum-related and marine industries throughout the port.

"Primary bases for the operation have been established at the Raritan Center Industrial Park near Perth Amboy, and at the Reynolds Shipyard on Staten Island," Mr.

Wagner said. "The Perth Amboy location houses our company's land-based equipment, routine maintenance facilities and our administrative offices, while the Staten Island operation at Stapleton Anchorage houses our major water-based equipment. Slated for delivery last month is the first privately owned major skimming vessel in the East, the Bennett Class 6E skimmer. This 40-foot LOA vessel will be stationed at Reynolds, but can be rapidly transported to other points in the harbor where it may be needed." 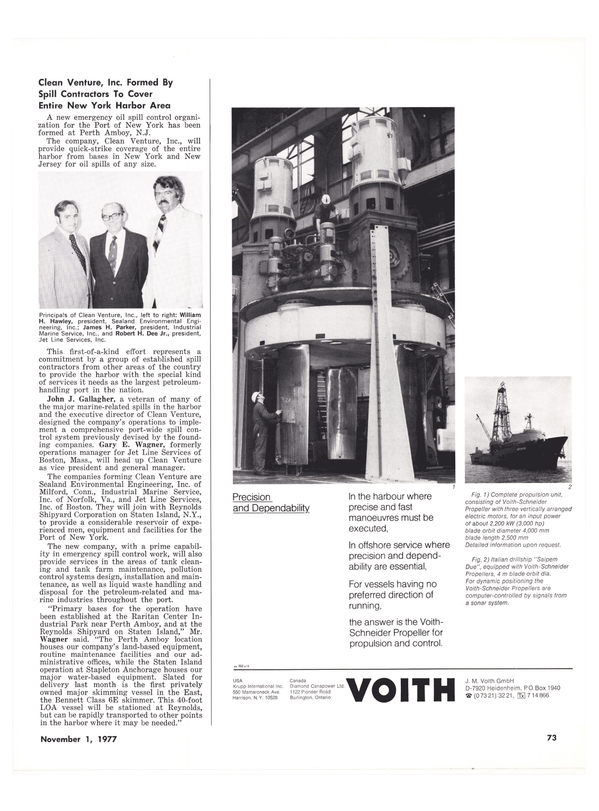