19087, an operating unit of Sun Company, has named presidents of two of its subsidiaries.

Frederick P. Eisenbiegler, bulk ship product group vice president for Sun Shipbuilding & Dry Dock Company — another Sun subsidiary— has been made president of Sun Transport, Inc. He also will hold the title of vice president and general manager of marine transport for S.T.M.T.

David C. Hippy, director of facilities and distribution for Sunmark Industries, also a Sun subsidiary, has been named president of a new S.T.M.T. subsidiary, Sunoco Terminals, Inc., and will also serve as S.T.M.T.'s vice president and general manager of terminals.

S.T.M.T. is involved in the transport, trading, brokering, marketing and terminalling of crude oil, petroleum products and other commodities on a worldwide basis. It operates Sun Company's fleet of tankers.

Mr. Eisenbiegler is a 1946 graduate of Webb Institute with a Bachelor of Science degree in naval architecture and marine engineering.

In 1974, he was elected vice p r e s i d e n t , Bulk Ship Product Group, for Sun Shipbuilding & Dry Dock Co., a Sun Company subsidiary. In this capacity, he was responsible for all aspects of Sun Ship's tanker program except for manufacturing. He held that post until being named to his present position.

Prior to joining Sun Ship, Mr.

Eisenbiegler served in various sales and field engineering posts with General Electric from 1946 to 1974. His last post there was as Far East manager for gas turbine sales and applications, headquartered in Tokyo.

Mr. Eisenbiegler is a member of The Society of Naval Architects and Marine Engineers and is a registered professional engineer in the state of New York.

Mr. Rippy received a bachelor's degree in management in 1962 from the University of Tulsa and attended graduate school both there and at Indiana State University.

He joined Sunray DX Oil Company, Tulsa, Okla., in 1966, two years before its merger with Sun Oil Company. In 1969, he went to Waterloo, Iowa, and became the division manager of marketing administration. A year later, he went to St. Louis, Mo., and served as vice president of Monark Petroleum Company, a former Sun subsidiary.

He was named sales manager of the Pittsburgh, Pa., marketing region in 1972. Following a corporate r e o r g a n i z a t i o n , he was named director of facilities and distribution for the new Sunmark Industries, Sun's retail marketing company, in 1975. He held that post until being named to his present assignment. 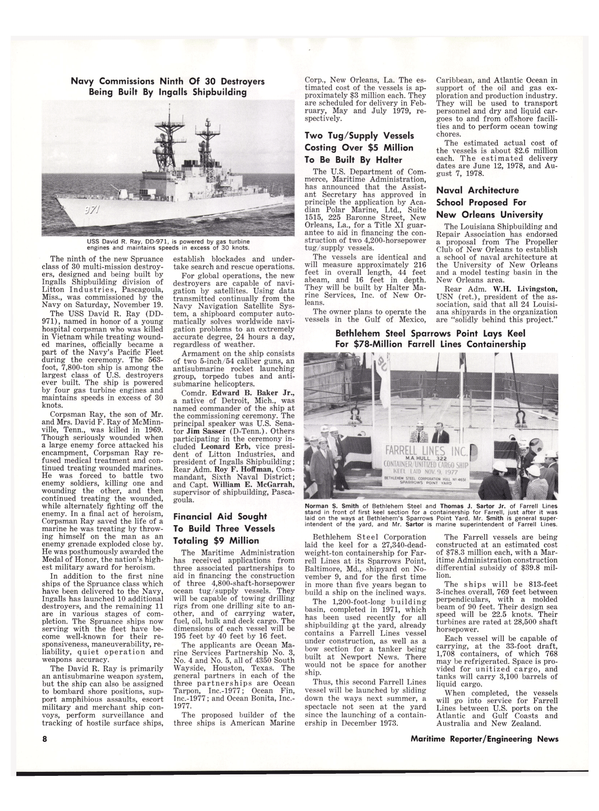