A musical salute to "Merchant Marine Heroes From the Past," and brief, dignified tributes to the merchant marine industry of the present were the highlights of the Port of New York-New Jersey National Maritime Day ceremonies held Monday, May 22, on the plaza of the World Trade Center, New York, N.Y.

Force, USMS, Director of Music of the Academy, who staged and directed the colorful review.

Three-hundred invited sponsors and guests and more than 2,000 of the general public were in attendance at the plaza during the noon-day lunch hour.

Peter C. Goldmark Jr., executive director of The Port Authority of New York and New Jersey, welcomed the invited guests, as well as the lunch-hour crowd of 2,000 of Trade Center and downtown area employees who gathered on the spacious plaza. Mr.

Goldmark called attention to the importance of international trade and transportation to the states of New York and New Jersey, as well as the nation as a whole, and noted that Maritime Day marked the opening of the 1978 World Trade Week.

Christian A. Bendixen, Commander of the Robert L. Hague Merchant Marine Post, was called upon to report on the American Legion Robert L. Hague Merchant Marine Achievement Award. The purpose of this award is to encourage a continuing betterment of the American merchant marine in every segment of the merchant marine industry. The American Bureau of Shipping was announced as the award winner for the year 1977. The actual presentation of the trophy to Robert T. Young, chairman of the board, ABS, will be made later through the office of the President of the United States. Former recipients were special dais guests, and these included Adm. John M. Will, USN (ret.), president, Arthur Tickle Engineering Works, Inc.— 1958; Howard Pack, vice chairman, Seatrain Lines, Inc.—1965; Ran Hettena, president, Maritime Overseas Corporation—1973; Sheldon H. Kinney, president, State University of New York Maritime College —1974, and Frank 0. Braynard, Father of OP SAIL—1976.

A highlight of the musical program was a special rendition of "Our Merchant Marine March" by its composer-lyricist Earl W.

The chorus, printed in the program for all to join in, went: "There's a banner in the breeze/ floating o'er the seven seas/It's the emblem of our merchant fleet/ our merchant marine/So we'll lend our heart and hand/to the commerce of our land/as we hail the Fourth Arm of Defense/our merchant marine." The program closed with a moving wreath ceremony and musical response in which wreaths to those who gave their lives serving the merchant marine were brought to the speakers' platform by sponsors representing government, labor and management. The wreath sponsors included Frank Drozak, executive vice president, Seafarer's International Union of N.A.; Thomas Martinez, national s e c r e t a r y - t r e a s u r e r , National Maritime Union of America; Vice Adm. W.F. Rea III, United States Coast Guard Eastern Area Commander, and Capt. Carl W. Swenson, executive vice president, Farrell Lines Incorporated.

Maritime Day is observed by law since 1933, on May 22 of each year. It commemorates the departure from Savannah, Ga., on that date in 1819, of the S/S Savannah on the first trans-Atlantic voyage by any steamship. The Maritime Day program opening the 1978 World Trade Week observance in the Port of New York-New Jersey is sponsored by maritime government, labor and management, including both American and foreign-flag shipping companies, as well as related maritime associations and industries.

Following the hour-long ceremony in the plaza, a reception and luncheon was held for sponsors and guests at One World Trade Center, "Oval Room." 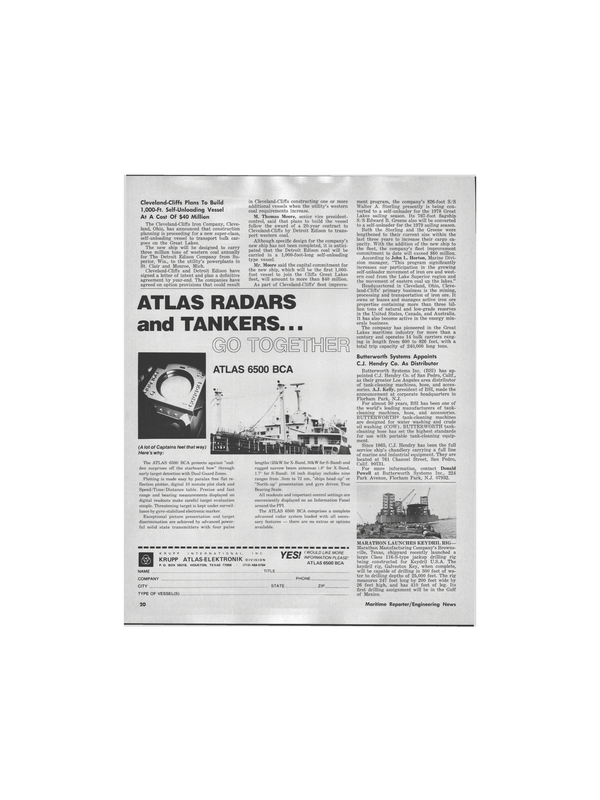 Other stories from July 1978 issue