The City of San Francisco is preparing to advertise for tenders to build a new fireboat, which has been designed by Morris Guralnick Associates, Inc., according to an announcement made by Hugh F. Munroe, president and chief executive officer of the prominent San Francisco-based firm of naval architects and marine engineers.

The new vessel, to be built for fire protection on the extensive San Francisco waterfront, will replace the venerable fireboat Phoenix, which has served the city for more than 28 years.

Consistent with modern technology, the highly automated, 93- foot-long craft will be able to take off at virtually a moment's notice to fight a waterfront fire. Its twin diesel engines will drive the vessel in excess of 18 knots as demonstrated by extensive model tests.

Water can be pumped at 6,000 gallons per minute under piers or over 45-foot-high ship decks and waterfront buildings. For fighting oil fires, there will be a 10,000- gallon-capacity foam system.

The new fireboat will be completely controlled by a three-man crew operating practically all of the modern firefighting equipment remotely from protected positions.

Outstanding flexibility and maneuverability for firefighting will be available through the use of controllable-pitch propellers and water-jet thrusters. On arrival at the scene of a fire, all required power to drive the pumps will be transferred from the propulsion engines, leaving sufficient power for maneuvering. Special features to protect the vessel personnel have also been incorporated in the design.

M o r r i s G u r a l n i c k Associates was selected to design the new vessel by the City of San Francisco, following a competition for the contract that involved several other naval architectural firms.

Coincidentally, Mr. Munroe also played an active part in the building of the Phoenix. He was in charge of construction of the retiring San Francisco fireboat, which was built by Plant Shipbuilding Company, Alameda, Calif., in 1952. 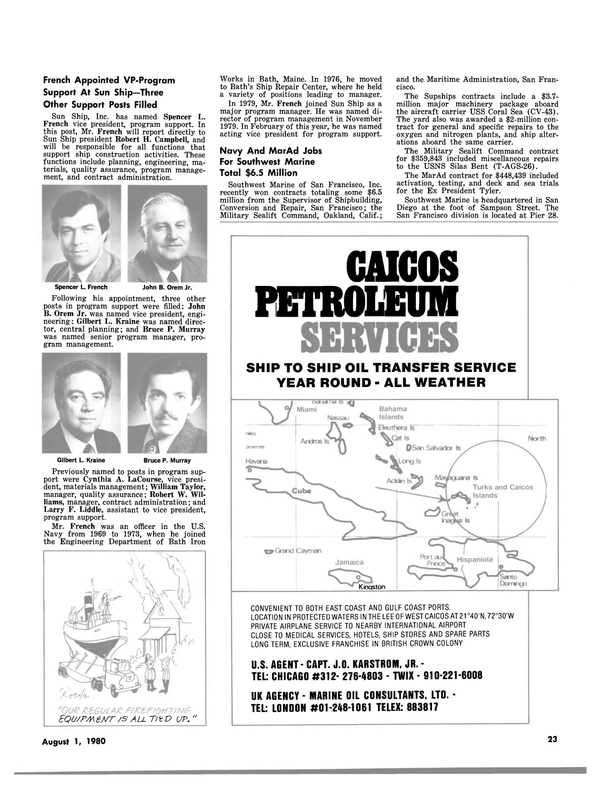