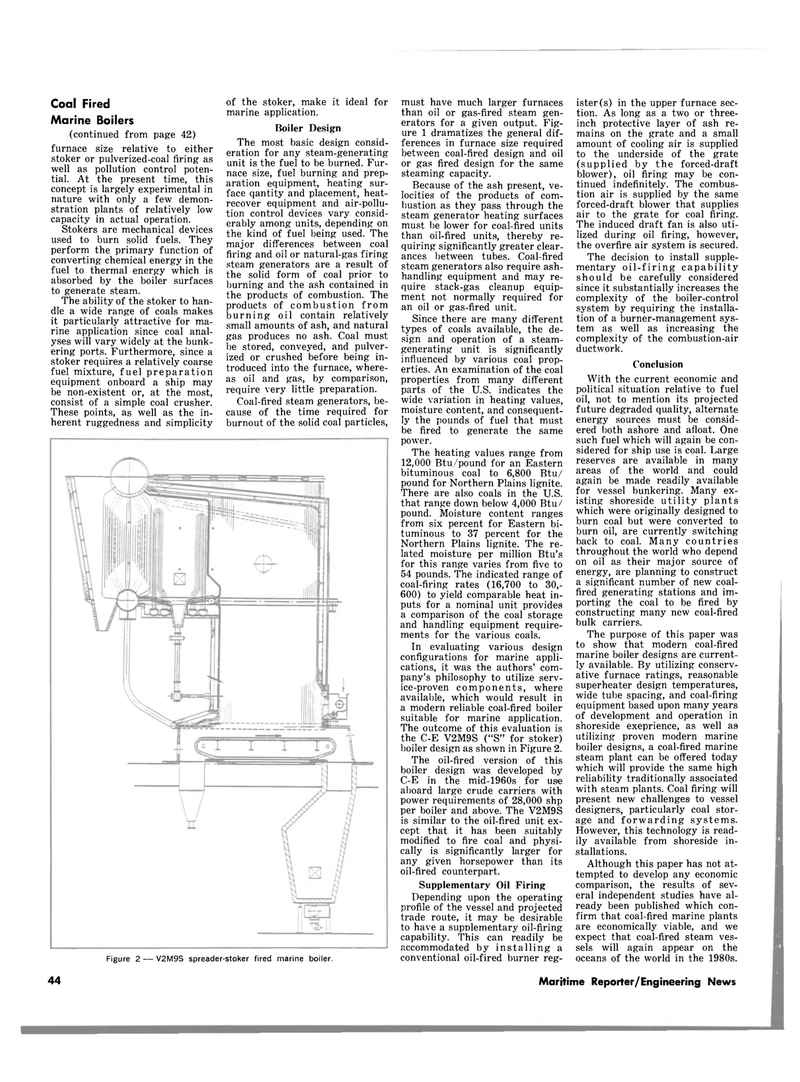 Marine Boilers (continued from page 42) furnace size relative to either stoker or pulverized-coal firing as well as pollution control poten- tial. At the present time, this concept is largely experimental in nature with only a few demon- stration plants of relatively low capacity in actual operation.

Stokers are mechanical devices used to burn solid fuels. They perform the primary function of converting chemical energy in the fuel to thermal energy which is absorbed by the boiler surfaces to generate steam.

These points, as well as the in- herent ruggedness and simplicity of the stoker, make it ideal for marine application.

The most basic design consid- eration for any steam-generating unit is the fuel to be burned. Fur- nace size, fuel burning and prep- aration equipment, heating sur- face qantity and placement, heat- recover equipment and air-pollu- tion control devices vary consid- erably among units, depending on the kind of fuel being used. The major differences between coal firing and oil or natural-gas firing steam generators are a result of the solid form of coal prior to burning and the ash contained in the products of combustion. The products of combustion from burning oil contain relatively small amounts of ash, and natural gas produces no ash. Coal must be stored, conveyed, and pulver- ized or crushed before being in- troduced into the furnace, where- as oil and gas, by comparison, require very little preparation.

Coal-fired steam generators, be- cause of the time required for burnout of the solid coal particles, must have much larger furnaces than oil or gas-fired steam gen- erators for a given output. Fig- ure 1 dramatizes the general dif- ferences in furnace size required between coal-fired design and oil or gas fired design for the same steaming capacity.

Because of the ash present, ve- locities of the products of com- bustion as they pass through the steam generator heating surfaces must be lower for coal-fired units than oil-fired units, thereby re- quiring significantly greater clear- ances between tubes. Coal-fired steam generators also require ash- handling equipment and may re- quire stack-gas cleanup equip- ment not normally required for an oil or gas-fired unit.

Since there are many different types of coals available, the de- sign and operation of a steam- generating unit is significantly influenced by various coal prop- erties. An examination of the coal properties from many different parts of the U.S. indicates the wide variation in heating values, moisture content, and consequent- ly the pounds of fuel that must be fired to generate the same power.

The heating values range from 12,000 Btu/pound for an Eastern bituminous coal to 6,800 Btu/ pound for Northern Plains lignite.

There are also coals in the U.S. that range down below 4,000 Btu/ pound. Moisture content ranges from six percent for Eastern bi- tuminous to 37 percent for the

Northern Plains lignite. The re- lated moisture per million Btu's for this range varies from five to 54 pounds. The indicated range of coal-firing rates (16,700 to 30,- 600) to yield comparable heat in- puts for a nominal unit provides a comparison of the coal storage and handling equipment require- ments for the various coals.

In evaluating various design configurations for marine appli- cations, it was the authors' com- pany's philosophy to utilize serv- ice-proven components, where available, which would result in a modern reliable coal-fired boiler suitable for marine application.

The outcome of this evaluation is the C-E V2M9S ("S" for stoker) boiler design as shown in Figure 2.

The oil-fired version of this boiler design was developed by

C-E in the mid-1960s for use aboard large crude carriers with power requirements of 28,000 shp per boiler and above. The V2M9S is similar to the oil-fired unit ex- cept that it has been suitably modified to fire coal and physi- cally is significantly larger for any given horsepower than its oil-fired counterpart.

Depending upon the operating profile of the vessel and projected trade route, it may be desirable to have a supplementary oil-firing capability. This can readily be accommodated by installing a conventional oil-fired burner reg- ister (s) in the upper furnace sec- tion. As long as a two or three- inch protective layer of ash re- mains on the grate and a small amount of cooling air is supplied to the underside of the grate (supplied by the forced-draft blower), oil firing may be con- tinued indefinitely. The combus- tion air is supplied by the same forced-draft blower that supplies air to the grate for coal firing.

The induced draft fan is also uti- lized during oil firing, however, the overfire air system is secured.

The decision to install supple- mentary oil-firing capability should be carefully considered since it substantially increases the complexity of the boiler-control system by requiring the installa- tion of a burner-management sys- tem as well as increasing the complexity of the combustion-air ductwork.

With the current economic and political situation relative to fuel oil, not to mention its projected future degraded quality, alternate energy sources must be consid- ered both ashore and afloat. One such fuel which will again be con- sidered for ship use is coal. Large reserves are available in many areas of the world and could again be made readily available for vessel bunkering. Many ex- isting shoreside utility plants which were originally designed to burn coal but were converted to burn oil, are currently switching back to coal. Many countries throughout the world who depend on oil as their major source of energy, are planning to construct a significant number of new coal- fired generating stations and im- porting the coal to be fired by constructing many new coal-fired bulk carriers.

However, this technology is read- ily available from shoreside in- stallations.

Although this paper has not at- tempted to develop any economic comparison, the results of sev- eral independent studies have al- ready been published which con- firm that coal-fired marine plants are economically viable, and we expect that coal-fired steam ves- sels will again appear on the oceans of the world in the 1980s. Figure 2 — V2M9S spreader-stoker fired marine boiler. 44 Maritime Reporter/Engineering News