George Engine Company, Inc., of Harvey, La., is an organization that started a little over 35 years ago with a $2,500 investment and has grown into one of the world's largest distributors of Detroit Diesel marine engines.

The company is named for its late founder, George S. Frierson Jr., who secured a franchise in 1945 from the General Motors Corporation through a combination of personality, business acumen, and old-fashioned luck. Mr.

The company's new Harvey headquarters facility encompasses a quarter of a million square feet, making GECO one of the biggest installations of its kind in the U.S. In addition, the company operates wholly owned branches in Lafayette, Morgan City, and Baton Rouge, and has acquired property for building additional branches in other key areas.

The company's franchised dealers, of whom there are more than 70, are located in nearly every important township and city throughout South Louisiana.

Sales to the maritime industry account for well over half of GECO's entire business, which will exceed gross sales of $140 million in 1981.

The original "Jimmy Diesels" sold by GECO were used for powering shrimp trawlers and oyster luggers. While commercial fishermen still account for a sizeable share of business, the company's major interest today lies with the offshore petroleum industry.

George Engine was part of the development of much of the equipment used for transporting machinery, supplies and personnel to offshore drilling and production sites. In the process, the company has supplied tens of thousands of marine engines and more than 1,500 complete boat "packages." The concept of selling and financing complete workboats originated with GECO and is widely accepted in the oil and towing industries.

GECO also furnished the engines used to power the world's first all-steel crewboat. Some years later, it did the same with the first all-aluminum crewboat that is still in service on Venezuela's Lake Maracaibo. The company also powered and financed the industry's first "bo-truck," then a radical new design for workboats, featuring a wheelhouse fully forward and a large afterdeck suited f o r carrying bulky oilfield cargo.

In January 1980, George Engine added ALCO Power Boss engines to its product line, giving the company the ability to power the biggest workboats including long-range towing/supply vessels, tugs, towboats, and other equipment used both offshore and on the inland waterways.

A sizeable portion of GECO's main plant is devoted to assembling generator sets for the marine industry.

In addition to its commercial work, GECO has furnished engines and generators for hundreds of patrol boats and a number of experimental vessels built for the military.

For a brochure on George Engine Co. capabilities, Write 12 on Reader Service Card 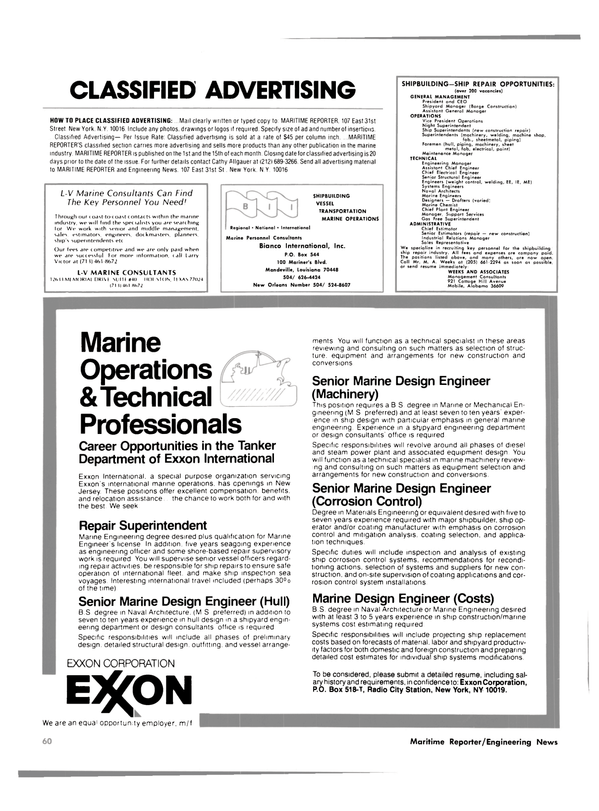