shipyard, New Iberia, La., was christened recently at ceremonies held at the yard.

The rig can drill below 30,000 feet in nominal 7- to 21-foot water depths. It is one of very few rigs sized for the intracoastal waterway that has the capability to drill multiple wells within its s l o t w i t h o u t repositioning the hull.

The Mr. Ray was christened by Mrs. Ray Hargrove, wife of the person for whom the rig is named, the late father of William R. Hargrove, board chairman of Phoenix Management Corp. Frederick L.

Saalwachter, executive vice president of Phoenix, delivered the address, and the Rev. John Mackinnon, pastor of Memorial Drive United Methodist Church, Houston, delivered the blessing of the rig and its crews.

The Mr. Ray is a 209-foot 6-inch-long by 14-foot deep, by 54-foot wide submersible barge having a 15-foot-wide by 40-footlong slot in the stern. The unit is equipped with a skid unit built to allow transverse and longitudinal movement of the intact mast and drill floor to as much as 4 feet off centerline port and starhoard, and to as much as 8 feet fore and aft. The movement is accomplished by activation of hydraulic cylinder jacks.

Each crane is rated 28,620 pounds lift at 30 feet. Each is equipped with 50-foot lattice type booms with 5-foot boom tip extension.

The auxiliary hoist is a 7,500- pound single line pull having a 5-ton ball with swivel and hook.

Each crane is hydraulically driven.

The port crane is equipped with controls on a crane pedestal.

The starboard crane is equipped with remote controls located on the rig floor.

William R. Hargrove, the Phoenix Management Corporation board chairman, reports that a jackup unit, Rig No. 5, is under construction at Bethlehem Steel's Sparrows Point, Md., yard, and that three other units are in various stages of planning or design for the company.

Phoenix has p u r c h a s e d the equipment and entered into a contract for a Bethlehem JU- 100MC. This rig will be a jackup mobile drilling unit with a cantilevered skid floor and skirted mat. It is intended to operate in the Gulf of Mexico, or in areas of similar environment, within a maximum sinking depth of 100 feet while drilling routine wells to 20,000 feet. Rig 5 is scheduled to be delivered during July 1982.

The Phoenix Seadrill Rig 4 will be capable of drilling 20,000 feet.

This rig is a first of a kind utilizing a three-module hovercraft principal as a wetlands drill barge system. It has been more than 16 months in design and engineering development in the U.S. and in England by the Phoenix Hovercraft Corporation. "As soon as we are comfortable with certain patents and licenses," Mr. Hargrove reported, "the final design phase shall be concluded. Machinery has already been committed, and we anticipate a 12- month construction by Brown & Root." This project is very much alive and Rig 4 shall be built, Mr. Hargrove stated.

Herman Schellstede and Associates, Inc. is under contract to develop and engineer a submersible offshore drilling rig design for Phoenix Seadrill Rig 6. The design criteria is for Smackover and Tuscaloosa-like drilling year around in the northern coastal waters of the Gulf of Mexico. Six shipyards have been asked to bid on construction. The critical machinery has already been committed, Mr. Hargrove said, and Rig 6 will be scheduled for a christening the first quarter of 1983.

Phoenix Seadrill Rig 7 will be a jackup designed to stav on location in water greater than 300 feet deep during hurricane season in the Gulf of Mexico. Its drilling capabilities will be to 20,000 feet. Here, as with all of these future rigs, major equipment has already been committed, he said. Good rapport exists with a highly competent shipyard for its delivery to Phoenix in March 1983. As soon as negotiations are concluded, Mr. Hargrove said, details will be given and a public announcement shall be made.

The company has two jackup units operating in the Gulf of Mexico, and the Mr. Ray is under contract to Koch Exploration Co.

for drilling in Louisiana waters. 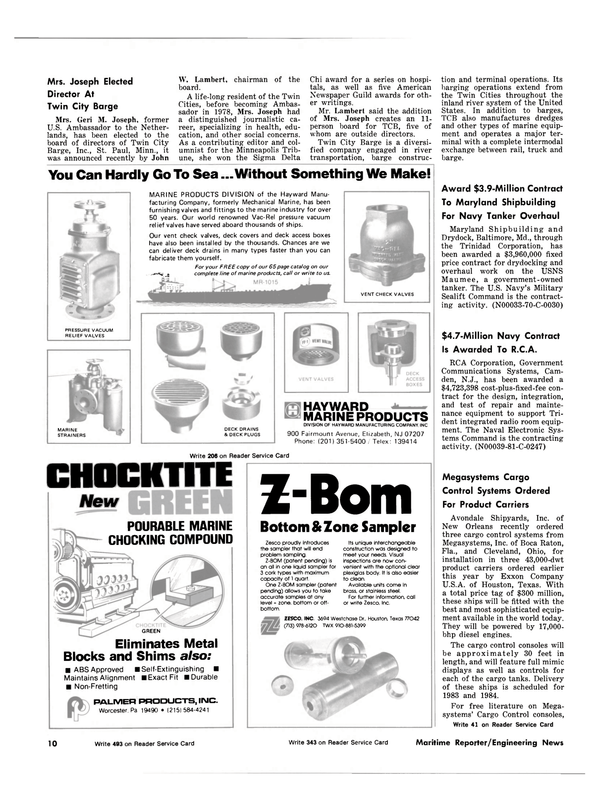