AWO A New Look At ADVOCACY AND INFLUENCE IN WASHINGTON

The inland and coastal domestic shallow-draft transportation industry, in fact much of the marine industry, is fighting for its very survival on a number of fronts in Washington. Among other issues in Congress, we are battling against the threat of new and disastrous user charges, and fighting to preserve the Jones Act, the foundation of our competitive position.

At the same time, we are trying to convince the Interstate Commerce Commission, the White House, and the Congress, that if railroads are permitted to gobble up barge lines, everybody except the railroads will be the big losers.

There are critical issues facing us today, and their outcome could drastically alter the face of our industry.

Educating and informing the decisionmakers in Washington, with the purpose of influencing them on behalf of a special interest, requires careful planning and innovative action. Our industry—any industry—can ill afford a lack of knowledge on how to advocate an issue, or the inability to act and act appropriately when the time comes.

One of the newest issue advocacy techniques, and one of the most successful, is to generate a large groundswell of "grassroots" support or opposition for a legislator's position on an issue, usually in the form of thousands of letters, postcards and phone calls arriving both in his Washington and home district offices a day or two prior to a key vote.

Before the vote on President Reagan's tax cut a few years back, a Congressman told me "Dammit, I'm a Democrat! I'm against this tax cut and I thought my district was against it. But I've got sixteen huge boxes of mail sitting in my office telling me to vote for this thing and the phone hasn't stopped ringing since last week. What should I do?" I stood with him on the Capitol steps as he flipped a coin in the air, watched it land, and then walked into the House Chamber to vote for the tax cut.

But the letters, postcards, telegrams, mailgrams, visits and phone calls of any grassroots campaign do not materialize spontaneously in a legislator's office. Such an effort requires careful planning, preparation and distribution of quality materials. Participants in grassroots efforts must be educated on the issues, often by their employer who is kept informed through a trade association. Alliances must be formed and in place among many—often diverse—interests.

Coalitions for action must be created that extend beyond the traditional trade association. In fact, the more diverse the basis of supporters or critics, the more the cause benefits in a Congressman's eyes, as long as the groups are all saying the same thing, in the right way, at the right time. For truly effective grassroots campaigning, substantial numbers must be involved, and careful monitoring of the issue at hand is required in Washington to determine exactly the right moment to mobilize. A good working knowledge of the grassroots process is essential to any group or industry wishing to influence a decision or advocate an important issue.

Members of Congress are aware of grassroots advocacy. They understand how it works and what it represents. They expect it, and they respond to it. Some industries have found, to their horror, that failure to understand the grassroots process can be deadly.

Think for a moment about mounting a defense against attempts to weaken or repeal the Jones Act. Think of the potential a solid and unified grassroots base, made up of marine interests—inland, coastal, ocean-going, lake carriers, small and large shipyards, associations, management, labor, et. al.—could exercise in Washington.

Another essential and less traditional weapon in the issue advocacy business is the media. What most people, including politicians, know about our industry is limited to what they read in newspapers and magazines, hear on the radio, or see on television. Barges, towboats and tugboats, locks and dams, ports and harbors are not all that visible to the general public in daily life. Every few years, along comes a network news story about some allegedly wasteful "Pork Barrel" water project. We watch as the Congressman who advocates such a project feels the heat of questioning on national television, and that's the end of it. The water project, useful or not, will forever bear that distasteful moniker, and future projects can expect the same. Yet our industry can no longer afford to be ignored or misrepresented in the media, and at the same time we need to turn the media's power of persuasion to our own advantage.

As veteran CBS newsman Daniel Schorr told a recent seminar in San Francisco: "In this mass communication society, if you don't exist in the media, for all practical purposes you don't exist." How can our industry effectively use the media as an advocacy tool on Capitol Hill? For one thing, frequent news coverage of an issue in a Congressman's hometown paper will generate letters from his constituents, will influence a newspaper's editorial bias, and will keep the issue visible in the public's mind. If a Congressman reads an editorial in his local paper about the number of jobs our industry creates in his district, he's going to pay attention. It is our job as advocates to make sure the editorial appears, and then to make sure the Congressman reads it. For example, at AWO when a pro-industry news story appears in a local media outlet, whether it's placed by us or not, we send it along with a letter to the Congressman in whose district paper the story ran.

So far, this small but effective program has been highly successful.

Congressmen read and pay attention to their local media very carefully. The local media is their free source of hometown publicity, advertising their political accomplishments and activities to potential voters when things are going well, and pulling them down with criticism and negative editorials when they don't. The local voters in New London, Connecticut or Greenville, Mississippi for example, don't look to the New York Times or Washington Post for their Congressional voting advice.

They read the local papers, watch the local television and listen to the local radio.

Generating a large number of quality local news stories on a particular industry issue can lead to news and editorial coverage by larger metropolitan daily papers.

If properly managed and channeled, the issue will be picked up by television and radio and by the wire services and the networks.

Politicians, who must out of necessity track the elusive animal called public opinion, will be carefully watching, and reading, and polling.

If the heightened news coverage can be combined with a welltimed and coordinated groundswell of grassroots action in support of our issues, no legislator can ignore it. How could he?

On many of our most critical fronts, being recognized by the media and being able to mobilize and voice our opinions will mean the difference between failure or success for our industry—between raising the decisionmaker's consciousness, or just plain whimpering alone in the dark, unnoticed. 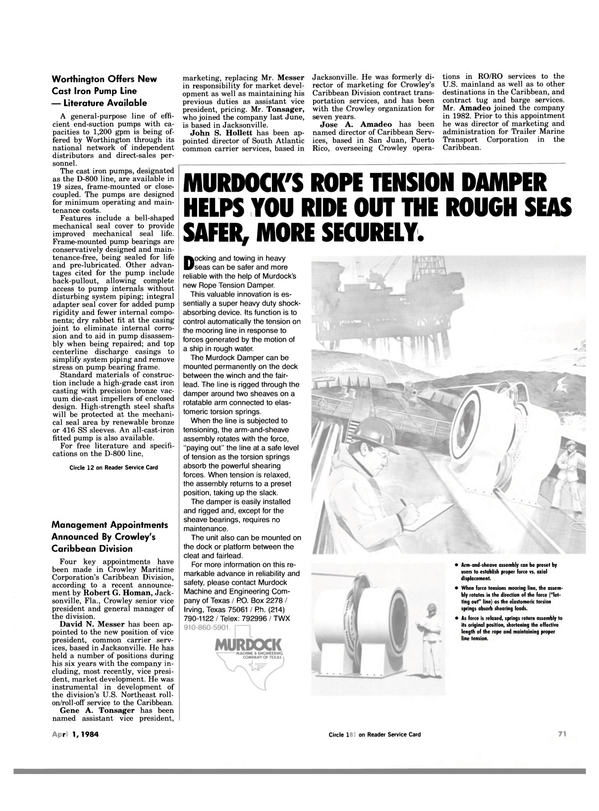 Read AWO A New Look At ADVOCACY AND INFLUENCE IN WASHINGTON in Pdf, Flash or Html5 edition of April 1984 Maritime Reporter

Other stories from April 1984 issue