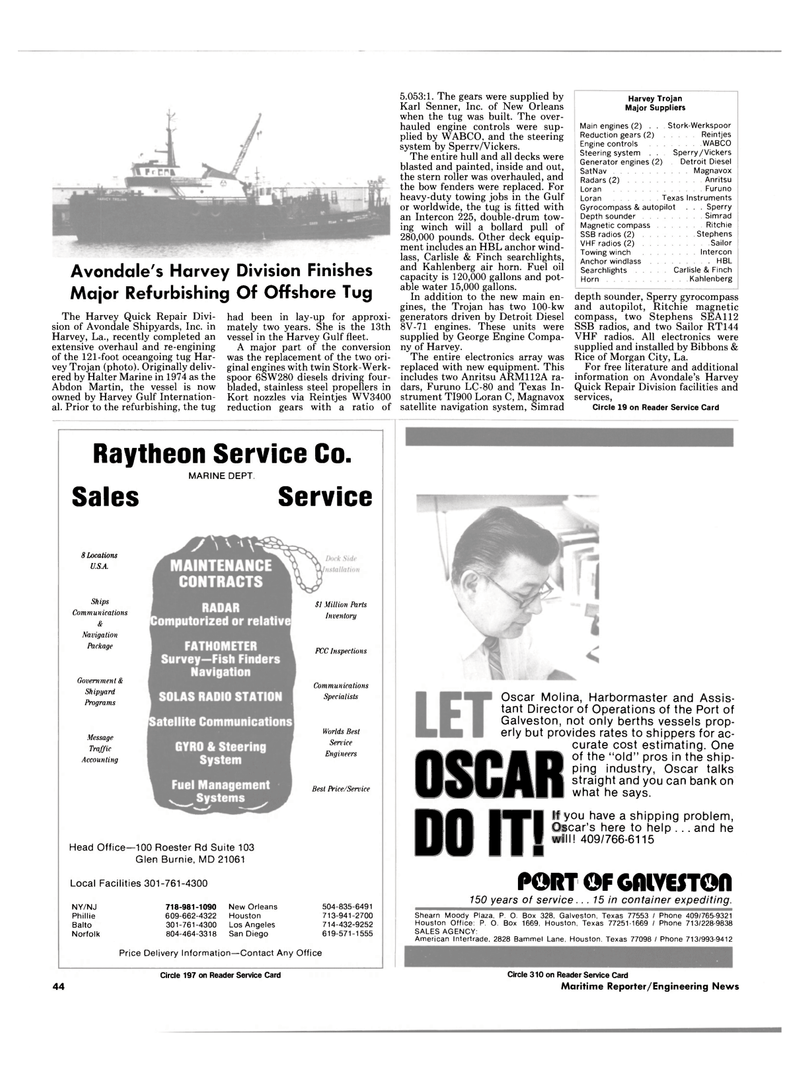 Abdon Martin, the vessel is now owned by Harvey Gulf Internation- al. Prior to the refurbishing, the tug had been in lay-up for approxi- mately two years. She is the 13th vessel in the Harvey Gulf fleet.

A major part of the conversion was the replacement of the two ori- ginal engines with twin Stork-Werk- spoor 6SW280 diesels driving four- bladed, stainless steel propellers in

Kort nozzles via Reintjes WV3400 reduction gears with a ratio of 5.053:1. The gears were supplied by

Karl Senner, Inc. of New Orleans when the tug was built. The over- hauled engine controls were sup- plied by WABCO, and the steering system by Sperrv/Vickers.

The entire hull and all decks were blasted and painted, inside and out, the stern roller was overhauled, and the bow fenders were replaced. For heavy-duty towing jobs in the Gulf or worldwide, the tug is fitted with an Intercon 225, double-drum tow- ing winch will a bollard pull of 280,000 pounds. Other deck equip- ment includes an HBL anchor wind- lass, Carlisle & Finch searchlights, and Kahlenberg air horn. Fuel oil capacity is 120,000 gallons and pot- able water 15,000 gallons.

In addition to the new main en- gines, the Trojan has two 100-kw generators driven by Detroit Diesel 8V-71 engines. These units were supplied by George Engine Compa- ny of Harvey.

VHF radios. All electronics were supplied and installed by Bibbons &

For free literature and additional information on Avondale's Harvey

Oscar Molina, Harbormaster and Assis- tant Director of Operations of the Port of

Galveston, not only berths vessels prop- erly but provides rates to shippers for ac- curate cost estimating. One of the "old" pros in the ship- ping industry, Oscar talks straight and you can bank on what he says.

If you have a shipping problem,

PORT OF CfllVESTOn 150 years of service ... 75 in container expediting.