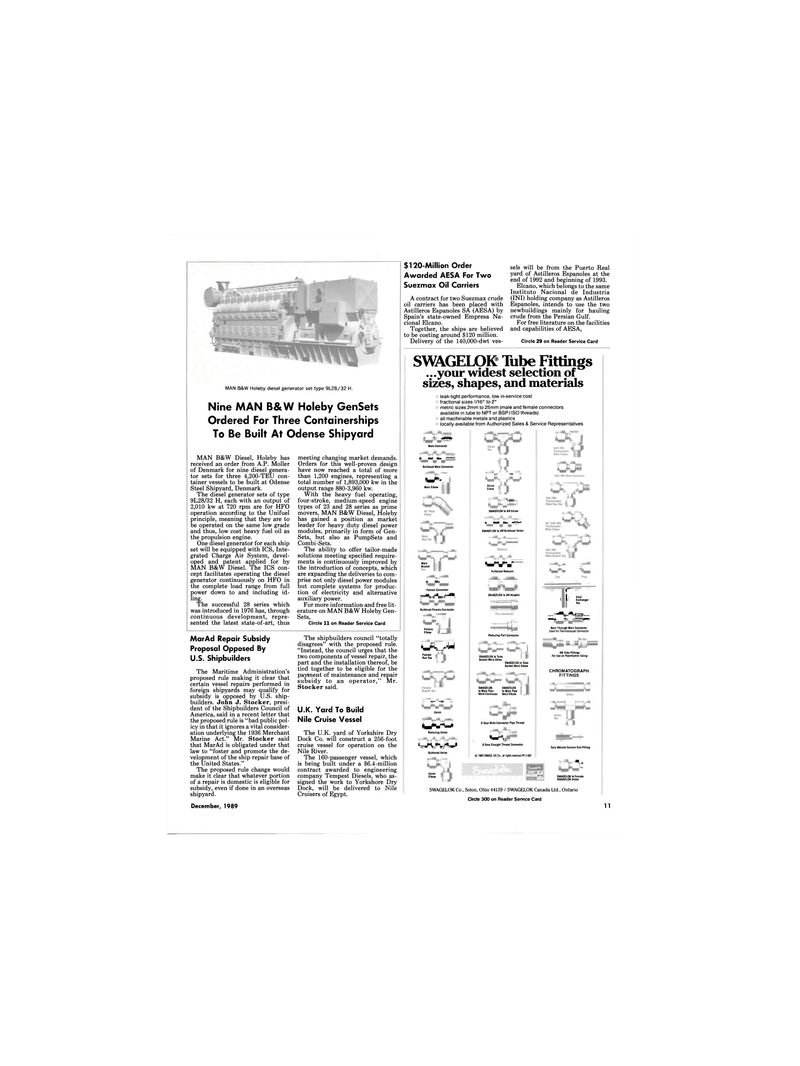 To Be Built At Odense Shipyard

MAN B&W Diesel, Holeby has received an order from A.P. Moller of Denmark for nine diesel genera- tor sets for three 4,200-TEU con- tainer vessels to be built at Odense

The diesel generator sets of type 9L28/32 H, each with an output of 2,010 kw at 720 rpm are for HFO operation according to the Unifuel principle, meaning that they are to be operated on the same low grade and thus, low cost heavy fuel oil as the propulsion engine.

One diesel generator for each ship set will be equipped with ICS, Inte- grated Charge Air System, devel- oped and patent applied for by

MAN B&W Diesel. The ICS con- cept facilitates operating the diesel generator continuously on HFO in the complete load range from full power down to and including id- ling.

The successful 28 series which was introduced in 1976 has, through continuous development, repre- sented the latest state-of-art, thus meeting changing market demands.

Sets, but also as PumpSets and

The ability to offer tailor-made solutions meeting specified require- ments is continuously improved by the introduction of concepts, which are expanding the deliveries to com- prise not only diesel power modules but complete systems for produc- tion of electricity and alternative auxiliary power.

The Maritime Administration's proposed rule making it clear that certain vessel repairs performed in foreign shipyards may qualify for subsidy is opposed by U.S. ship- builders. John J. Stocker, presi- dent of the Shipbuilders Council of

America, said in a recent letter that the proposed rule is "bad public pol- icy in that it ignores a vital consider- ation underlying the 1936 Merchant

Marine Act." Mr. Stocker said that MarAd is obligated under that law to "foster and promote the de- velopment of the ship repair base of the United States."

The proposed rule change would make it clear that whatever portion of a repair is domestic is eligible for subsidy, even if done in an overseas shipyard.

Together, the ships are believed to be costing around $120 million.

Elcano, which belongs to the same

Espanoles, intends to use the two newbuildings mainly for hauling crude from the Persian Gulf.

For free literature on the facilities and capabilities of AESA,

The shipbuilders council "totally disagrees" with the proposed rule. "Instead, the council urges that the two components of vessel repair, the part and the installation thereof, be tied together to be eligible for the payment of maintenance and repair subsidy to an operator," Mr.

The U.K. yard of Yorkshire Dry

Dock Co. will construct a 256-foot cruise vessel for operation on the

The 160-passenger vessel, which is being built under a $6.4-million contract awarded to engineering company Tempest Diesels, who as- signed the work to Yorkshore Dry

Dock, will be delivered to Nile

SWAGELOK to AN Bulkhead Union

SWAGELOK to AN Adapter

For Use on Polyethylene Tubing