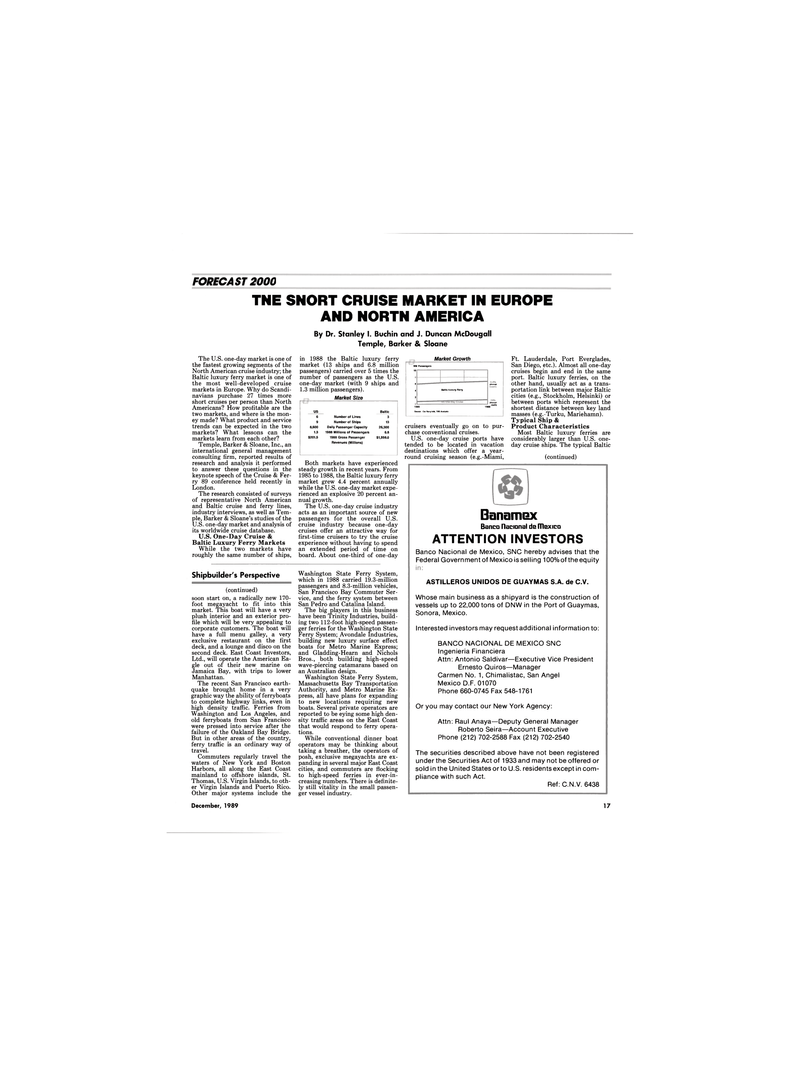 By Dr. Stanley I. Buchin and J. Duncan McDougall

The U.S. one-day market is one of the fastest growing segments of the

Baltic luxury ferry market is one of the most well-developed cruise markets in Europe. Why do Scandi- navians purchase 27 times more short cruises per person than North

Americans? How profitable are the two markets, and where is the mon- ey made? What product and service trends can be expected in the two markets? What lessons can the markets learn from each other?

Temple, Barker & Sloane, Inc., an international general management consulting firm, reported results of research and analysis it performed to answer these questions in the keynote speech of the Cruise & Fer- ry 89 conference held recently in

The research consisted of surveys of representative North American and Baltic cruise and ferry lines, industry interviews, as well as Tem- ple, Barker & Sloane's studies of the

U.S. one-day market and analysis of its worldwide cruise database.

While the two markets have roughly the same number of ships,

Shipbuilder's Perspective (continued) soon start on, a radically new 170- foot megayacht to fit into this market. This boat will have a very plush interior and an exterior pro- file which will be very appealing to corporate customers. The boat will have a full menu galley, a very exclusive restaurant on the first deck, and a lounge and disco on the second deck. East Coast Investors,

Ltd., will operate the American Ea- gle out of their new marine on

Jamaica Bay, with trips to lower

The recent San Francisco earth- quake brought home in a very graphic way the ability of ferryboats to complete highway links, even in high density traffic. Ferries from

Washington and Los Angeles, and old ferryboats from San Francisco were pressed into service after the failure of the Oakland Bay Bridge.

But in other areas of the country, ferry traffic is an ordinary way of travel.

Commuters regularly travel the waters of New York and Boston

Harbors, all along the East Coast mainland to offshore islands, St.

Other major systems include the

Both markets have experienced steady growth in recent years. From 1985 to 1988, the Baltic luxury ferry market grew 4.4 percent annually while the U.S. one-day market expe- rienced an explosive 20 percent an- nual growth.

The U.S. one-day cruise industry acts as an important source of new passengers for the overall U.S. cruise industry because one-day cruises offer an attractive way for first-time cruisers to try the cruise experience without having to spend an extended period of time on board. About one-third of one-day

The big players in this business have been Trinity Industries, build- ing two 112-foot high-speed passen- ger ferries for the Washington State

Bros., both building high-speed wave-piercing catamarans based on an Australian design.

Authority, and Metro Marine Ex- press, all have plans for expanding to new locations requiring new boats. Several private operators are reported to be eying some high den- sity traffic areas on the East Coast that would respond to ferry opera- tions.

While conventional dinner boat operators may be thinking about taking a breather, the operators of posh, exclusive megayachts are ex- panding in several major East Coast cities, and commuters are flocking to high-speed ferries in ever-in- creasing numbers. There is definite- ly still vitality in the small passen- ger vessel industry.

U.S. one-day cruise ports have tended to be located in vacation destinations which offer a year- round cruising season (e.g.-Miami,

San Diego, etc.). Almost all one-day cruises begin and end in the same port. Baltic luxury ferries, on the other hand, usually act as a trans- portation link between major Baltic cities (e.g., Stockholm, Helsinki) or between ports which represent the shortest distance between key land masses (e.g.-Turku, Mariehamn).

Federal Government of Mexico is selling 100% of the equity

Whose main business as a shipyard is the construction of vessels up to 22,000 tons of DNW in the Port of Guaymas,

The securities described above have not been registered under the Securities Act of 1933 and may not be offered or sold in the United States orto U.S. residents except in com- pliance with such Act.