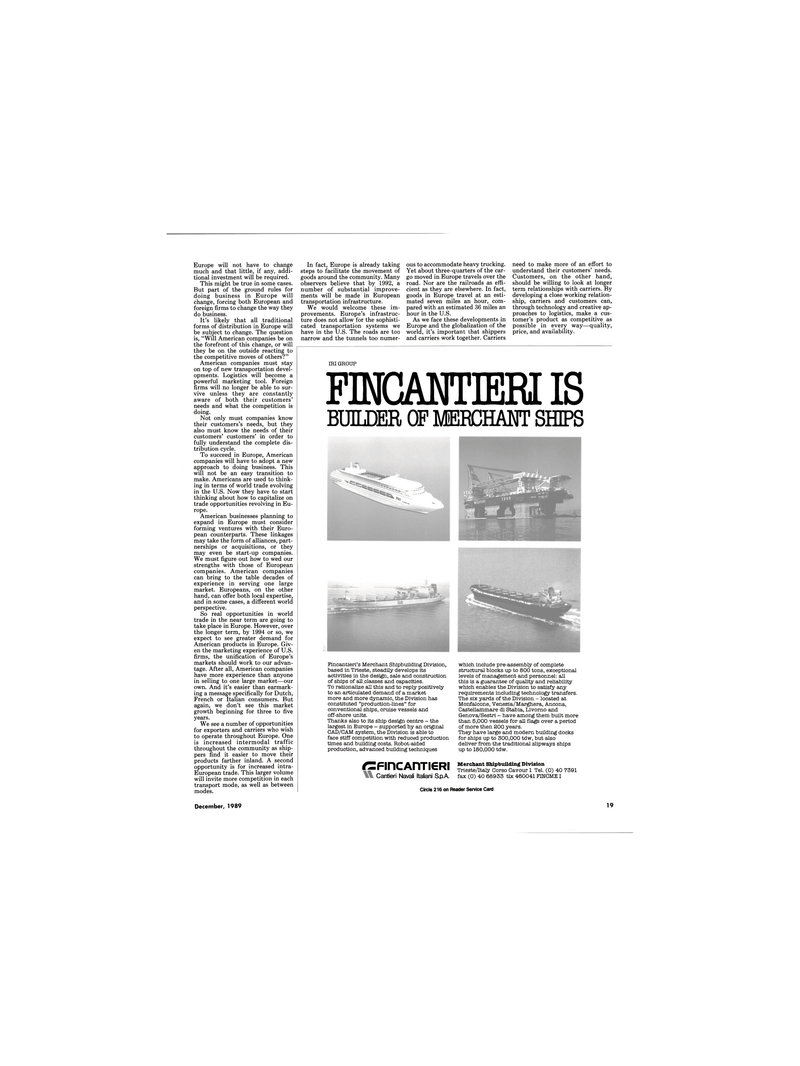 Europe will not have to change much and that little, if any, addi- tional investment will be required.

But part of the ground rules for doing business in Europe will change, forcing both European and foreign firms to change the way they do business.

It's likely that all traditional forms of distribution in Europe will be subject to change. The question is, "Will American companies be on the forefront of this change, or will they be on the outside reacting to the competitive moves of others?"

American companies must stay on top of new transportation devel- opments. Logistics will become a powerful marketing tool. Foreign firms will no longer be able to sur- vive unless they are constantly aware of both their customers' needs and what the competition is doing.

To succeed in Europe, American companies will have to adopt a new approach to doing business. This will not be an easy transition to make. Americans are used to think- ing in terms of world trade evolving in the U.S. Now they have to start thinking about how to capitalize on trade opportunities revolving in Eu- rope.

American businesses planning to expand in Europe must consider forming ventures with their Euro- pean counterparts. These linkages may take the form of alliances, part- nerships or acquisitions, or they may even be start-up companies.

We must figure out how to wed our strengths with those of European companies. American companies can bring to the table decades of experience in serving one large market. Europeans, on the other hand, can offer both local expertise, and in some cases, a different world perspective.

So real opportunities in world trade in the near term are going to take place in Europe. However, over the longer term, by 1994 or so, we expect to see greater demand for

American products in Europe. Giv- en the marketing experience of U.S. firms, the unification of Europe's markets should work to our advan- tage. After all, American companies have more experience than anyone in selling to one large market—our own. And it's easier than earmark- ing a message specifically for Dutch,

French or Italian consumers. But again, we don't see this market growth beginning for three to five years.

We see a number of opportunities for exporters and carriers who wish to operate throughout Europe. One is increased intermodal traffic throughout the community as ship- pers find it easier to move their products farther inland. A second opportunity is for increased intra-

European trade. This larger volume will invite more competition in each transport mode, as well as between modes.

In fact, Europe is already taking steps to facilitate the movement of goods around the community. Many observers believe that by 1992, a number of substantial improve- ments will be made in European transportation infrastructure.

We would welcome these im- provements. Europe's infrastruc- ture does not allow for the sophisti- cated transportation systems we have in the U.S. The roads are too narrow and the tunnels too numer- ous to accommodate heavy trucking.

As we face these developments in

Europe and the globalization of the world, it's important that shippers and carriers work together. Carriers need to make more of an effort to understand their customers' needs.

Customers, on the other hand, should be willing to look at longer term relationships with carriers. By developing a close working relation- ship, carriers and customers can, through technology and creative ap- proaches to logistics, make a cus- tomer's product as competitive as possible in every way—quality, price, and availability.

Fincantieri's Merchant Shipbuilding Division, based in Trieste, steadily develops its activities in the design, sale and construction of ships of all.elasses and capacities.

To rationalize all this and to reply positively to an articulated demand of a market more and more dynamic, the Division has constituted "production-lines" for conventional ships, cruise vessels and off-shore units.

Cantieri Navali Italiani S.p.A. which include pre-assembly of complete structural blocks up to 800 tons, exceptional levels of management and personnel: all this is a guarantee of quality and reliability which enables the Division to satisfy any requirements including technology transfers.

The six yards of the Division - located at

Genova/Sestri - have among them built more than 5,000 vessels for all flags over a period of more then 200 years.

They have large and modern building docks for ships up to 300,000 tdw, but also deliver from the traditional slipways ships up to 180,000 tdw.