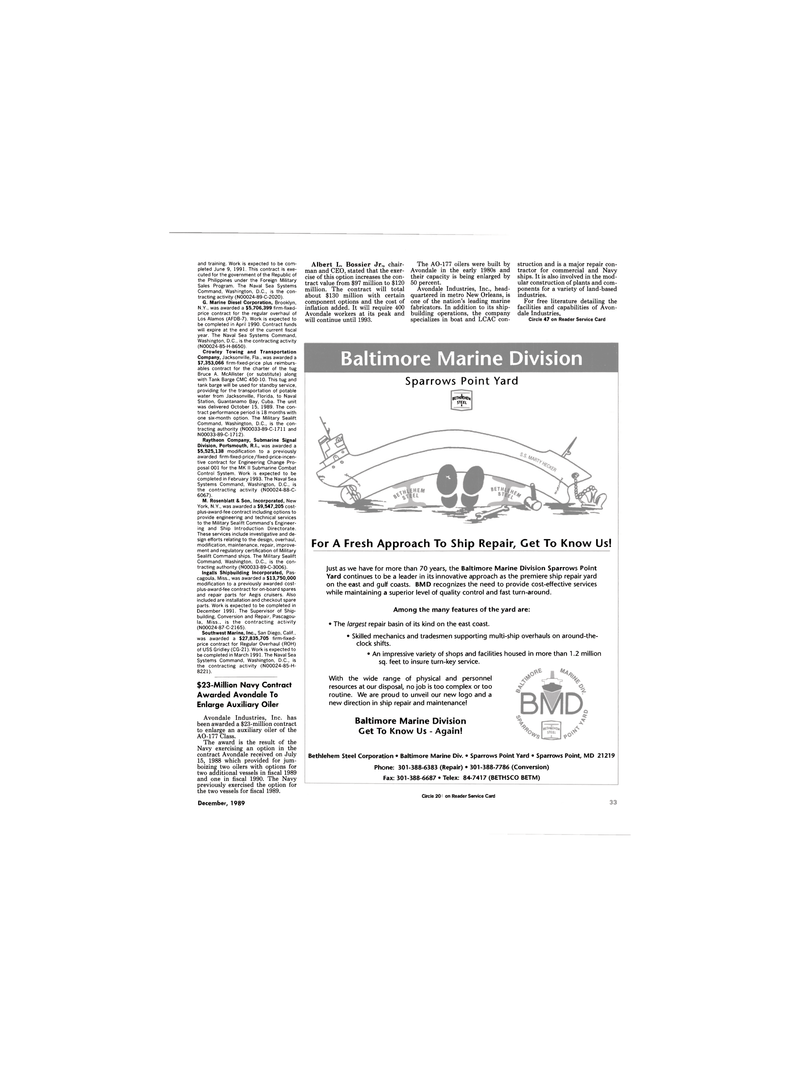 and training. Work is expected to be com- pleted June 9, 1991. This contract is exe- cuted for the government of the Republic of the Philippines under the Foreign Military

Los Alamos (AFDB-7). Work is expected to be completed in April 1990. Contract funds will expire at the end of the current fiscal year. The Naval Sea Systems Command,

Company, Jacksonville, Fla., was awarded a $7,353,066 firm-fixed-price plus reimburs- ables contract for the charter of the tug

Bruce A. McAllister (or substitute) along with Tank Barge CMC 450-10. This tug and tank barge will be used for standby service, providing for the transportation of potable water from Jacksonville, Florida, to Naval

Station, Guantanamo Bay, Cuba. The unit was delivered October 15, 1989. The con- tract performance period is 18 months with one six-month option. The Military Sealift

Control System. Work is expected to be completed in February 1993. The Naval Sea

These services include investigative and de- sign efforts relating to the design, overhaul, modification, maintenance, repair, improve- ment and regulatory certification of Military

Ingalls Shipbuilding Incorporated, Pas- cagoula, Miss., was awarded a $13,750,000 modification to a previously awarded cost- plus-award-fee contract for on-board spares and repair parts for Aegis cruisers. Also included are installation and checkout spare parts. Work is expected to be completed in

Avondale Industries, Inc. has been awarded a $23-million contract to enlarge an auxiliary oiler of the

The award is the result of the

Navy exercising an option in the contract Avondale received on July 15, 1988 which provided for jum- boizing two oilers with options for two additional vessels in fiscal 1989 and one in fiscal 1990. The Navy previously exercised the option for the two vessels for fiscal 1989.

Albert L. Bossier Jr., chair- man and CEO, stated that the exer- cise of this option increases the con- tract value from $97 million to $120 million. The contract will total about $130 million with certain component options and the cost of inflation added. It will require 400

Avondale workers at its peak and will continue until 1993.

The AO-177 oilers were built by

Avondale in the early 1980s and their capacity is being enlarged by 50 percent.

Avondale Industries, Inc., head- quartered in metro New Orleans, is one of the nation's leading marine fabricators. In addition to its ship- building operations, the company specializes in boat and LCAC con-

STEEl __ » struction and is a major repair con- tractor for commercial and Navy ships. It is also involved in the mod- ular construction of plants and com- ponents for a variety of land-based industries.

For free literature detailing the facilities and capabilities of Avon- dale Industries,

For A Fresh Approach To Ship Repair, Get To Know Us! just as we have for more than 70 years, the Baltimore Marine Division Sparrows Point

Yard continues to be a leader in its innovative approach as the premiere ship repair yard on the east and gulf coasts. BMD recognizes the need to provide cost-effective services while maintaining a superior level of quality control and fast turn-around.

Among the many features of the yard are: • The largest repair basin of its kind on the east coast. • Skilled mechanics and tradesmen supporting multi-ship overhauls on around-the- clock shifts. • An impressive variety of shops and facilities housed in more than 1.2 million sq. feet to insure turn-key service.

With the wide range of physical and personnel resources at our disposal, no job is too complex or too routine. We are proud to unveil our new logo and a new direction in ship repair and maintenance!