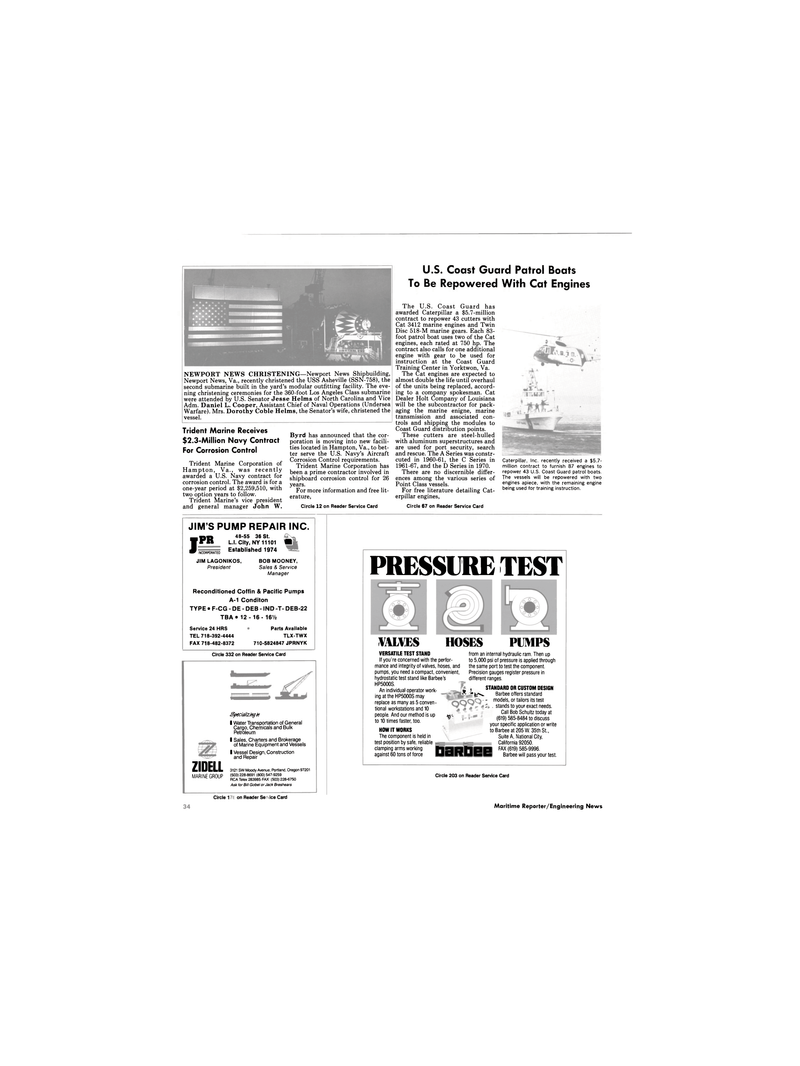 Hampton, Va., was recently awarded a U.S. Navy contract for corrosion control. The award is for a one-year period at $2,259,510, with two option years to follow.

Byrd has announced that the cor- poration is moving into new facili- ties located in Hampton, Va., to bet- ter serve the U.S. Navy's Aircraft

Trident Marine Corporation has been a prime contractor involved in shipboard corrosion control for 26 years.

To Be Repowered With Cat Engines

The U.S. Coast Guard has awarded Caterpillar a $5.7-million contract to repower 43 cutters with

Disc 518-M marine gears. Each 83- foot patrol boat uses two of the Cat engines, each rated at 750 hp. The contract also calls for one additional engine with gear to be used for instruction at the Coast Guard

The Cat engines are expected to almost double the life until overhaul of the units being replaced, accord- ing to a company spokesman. Cat

Dealer Holt Company of Louisiana will be the subcontractor for pack- aging the marine enigne, marine transmission and associated con- trols and shipping the modules to

These cutters are steel-hulled with aluminum superstructures and are used for port security, search and rescue. The A Series was constr- cuted in 1960-61, the C Series in 1961-67, and the D Series in 1970.

There are no discernible differ- ences among the various series of

The vessels will be repowered with two engines apiece, with the remaining engine being used for training instruction.

I Water Transportation of General

I Sales, Charters and Brokerage of Marine Equipment and Vessels

If you're concerned with the perfor- mance and integrity of valves, hoses, and pumps, you need a compact, convenient, hydrostatic test stand like Barbee's

An individual operator work- ing at the HP5000S may replace as many as 5 conven- tional workstations and 10 people. And our method is up to 10 times faster, too.

The component is held in test position by safe, reliable clamping arms working against 60 tons of force from an internal hydraulic ram. Then up to 5,000 psi of pressure is applied through the same port to test the component.

Barbee offers standard - models, or tailors its test % stands to your exact needs.

Barbee will pass your test.