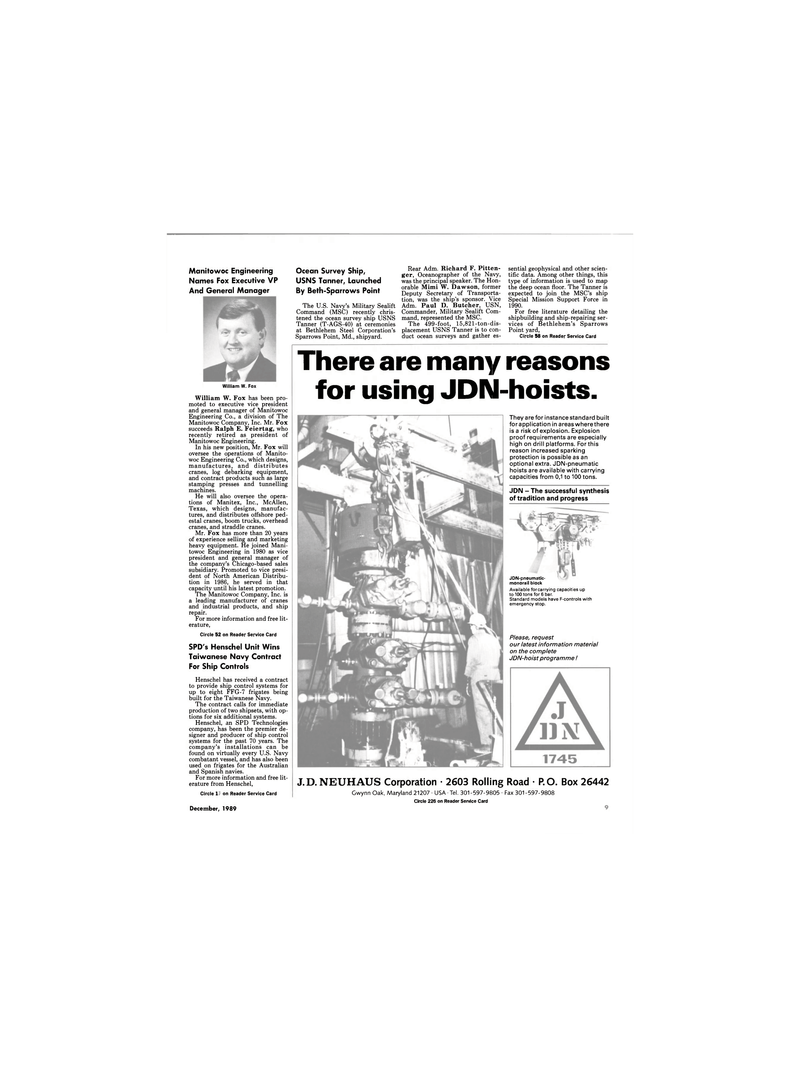 William W. Fox has been pro- moted to executive vice president and general manager of Manitowoc

Engineering Co., a division of The

In his new position, Mr. Fox will oversee the operations of Manito- woc Engineering Co., which designs, manufactures, and distributes cranes, log debarking equipment, and contract products such as large stamping presses and tunnelling machines.

He will also oversee the opera- tions of Manitex, Inc., McAllen,

Mr. Fox has more than 20 years of experience selling and marketing heavy equipment. He joined Mani- towoc Engineering in 1980 as vice president and general manager of the company's Chicago-based sales subsidiary. Promoted to vice presi- dent of North American Distribu- tion in 1986, he served in that capacity until his latest promotion.

The Manitowoc Company, Inc. is a leading manufacturer of cranes and industrial products, and ship repair.

Henschel has received a contract to provide ship control systems for up to eight FFG-7 frigates being built for the Taiwanese Navy.

The contract calls for immediate production of two shipsets, with op- tions for six additional systems.

Henschel, an SPD Technologies company, has been the premier de- signer and producer of ship control systems for the past 70 years. The company's installations can be found on virtually every U.S. Navy combatant vessel, and has also been used on frigates for the Australian and Spanish navies.

For more information and free lit- erature from Henschel,

Deputy Secretary of Transporta- tion, was the ship's sponsor. Vice

The 499-foot, 15,821-ton-clis- placement USNS Tanner is to con- duct ocean surveys and gather es- sential geophysical and other scien- tific data. Among other things, this type of information is used to map the deep ocean floor. The Tanner is expected to join the MSC's ship

There are many reasons for using JDN-hoists.

They are for instance standard built forapplication in areas where there is a risk of explosion. Explosion proof requirements are especially high on drill platforms. For this reason increased sparking protection is possible as an optional extra. JDN-pneumatic hoists are available with carrying capacities from 0,1 to 100 tons.

JDN - The successful synthesis of tradition and progress

Available forcarrying capacities up to 100 tons for 6 bar.

Please, request our latest information material on the complete