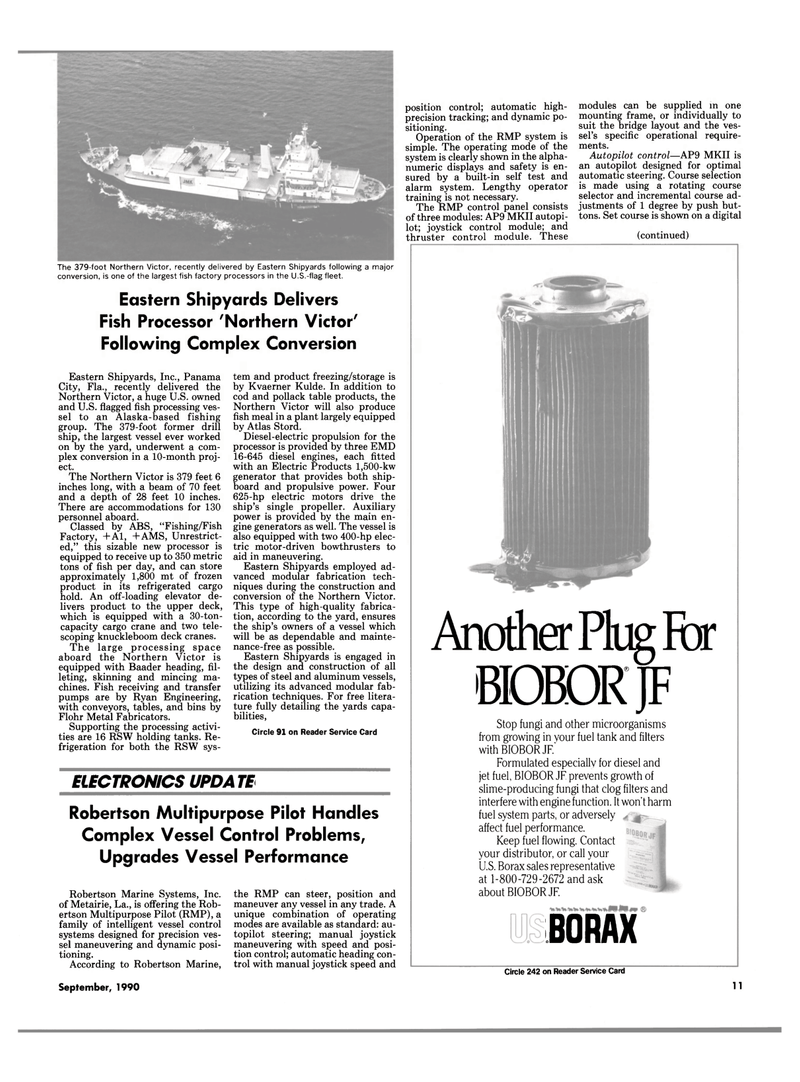 The 379-foot Northern Victor, recently delivered by Eastern Shipyards following a major conversion, is one of the largest fish factory processors in the U.S.-flag fleet.

Northern Victor, a huge U.S. owned and U.S. flagged fish processing ves- sel to an Alaska-based fishing group. The 379-foot former drill ship, the largest vessel ever worked on by the yard, underwent a com- plex conversion in a 10-month proj- ect.

There are accommodations for 130 personnel aboard.

Factory, +A1, +AMS, Unrestrict- ed," this sizable new processor is equipped to receive up to 350 metric tons of fish per day, and can store approximately 1,800 mt of frozen product in its refrigerated cargo hold. An off-loading elevator de- livers product to the upper deck, which is equipped with a 30-ton- capacity cargo crane and two tele- scoping knuckleboom deck cranes.

The large processing space aboard the Northern Victor is equipped with Baader heading, fil- leting, skinning and mincing ma- chines. Fish receiving and transfer pumps are by Ryan Engineering, with conveyors, tables, and bins by

Supporting the processing activi- ties are 16 RSW holding tanks. Re- frigeration for both the RSW sys-

According to Robertson Marine,

Operation of the RMP system is simple. The operating mode of the system is clearly shown in the alpha- numeric displays and safety is en- sured by a built-in self test and alarm system. Lengthy operator training is not necessary.

The RMP control panel consists of three modules: AP9 MKII autopi- lot; joystick control module; and thruster control module. These modules can be supplied in one mounting frame, or individually to suit the bridge layout and the ves- sel's specific operational require- ments.

Autopilot control—AP9 MKII is an autopilot designed for optimal automatic steering. Course selection is made using a rotating course selector and incremental course ad- justments of 1 degree by push but- tons. Set course is shown on a digital (continued) tem and product freezing/storage is by Kvaerner Kulde. In addition to cod and pollack table products, the

Diesel-electric propulsion for the processor is provided by three EMD 16-645 diesel engines, each fitted with an Electric Products 1,500-kw generator that provides both ship- board and propulsive power. Four 625-hp electric motors drive the ship's single propeller. Auxiliary power is provided by the main en- gine generators as well. The vessel is also equipped with two 400-hp elec- tric motor-driven bowthrusters to aid in maneuvering.

This type of high-quality fabrica- tion, according to the yard, ensures the ship's owners of a vessel which will be as dependable and mainte- nance-free as possible.

Eastern Shipyards is engaged in the design and construction of all types of steel and aluminum vessels, utilizing its advanced modular fab- rication techniques. For free litera- ture fully detailing the yards capa- bilities,

Circle 91 on Reader Service Card the RMP can steer, position and maneuver any vessel in any trade. A unique combination of operating modes are available as standard: au- topilot steering; manual joystick maneuvering with speed and posi- tion control; automatic heading con- trol with manual joystick speed and

Stop fungi and other microorganisms from growing in your fuel tank and filters with BIOBOR JF."

Keep fuel flowing. Contact your distributor, or call your