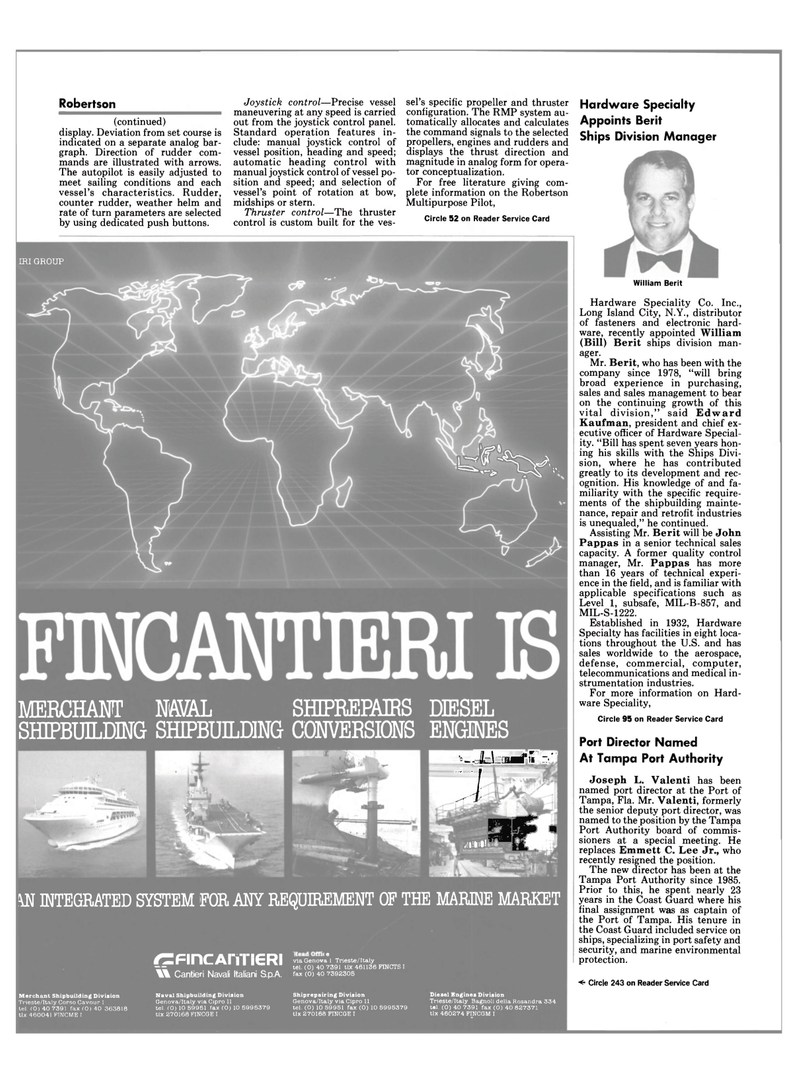 The autopilot is easily adjusted to meet sailing conditions and each vessel's characteristics. Rudder, counter rudder, weather helm and rate of turn parameters are selected by using dedicated push buttons.

Thruster control—The thruster control is custom built for the ves- sel's specific propeller and thruster configuration. The RMP system au- tomatically allocates and calculates the command signals to the selected propellers, engines and rudders and displays the thrust direction and magnitude in analog form for opera- tor conceptualization.

For free literature giving com- plete information on the Robertson

J , | lit! •f• \N INTEGRATED SYSTEM FOR ANY REQUIREMENT OF THE MARINE MARKET

Mr. Berit, who has been with the company since 1978, "will bring broad experience in purchasing, sales and sales management to bear on the continuing growth of this vital division," said Edward

Kaufman, president and chief ex- ecutive officer of Hardware Special- ity. "Bill has spent seven years hon- ing his skills with the Ships Divi- sion, where he has contributed greatly to its development and rec- ognition. His knowledge of and fa- miliarity with the specific require- ments of the shipbuilding mainte- nance, repair and retrofit industries is unequaled," he continued.

Assisting Mr. Berit will be John

Pappas in a senior technical sales capacity. A former quality control manager, Mr. Pappas has more than 16 years of technical experi- ence in the field, and is familiar with applicable specifications such as

Specialty has facilities in eight loca- tions throughout the U.S. and has sales worldwide to the aerospace, defense, commercial, computer, telecommunications and medical in- strumentation industries.

Joseph L. Valenti has been named port director at the Port of

Tampa, Fla. Mr. Valenti, formerly the senior deputy port director, was named to the position by the Tampa

Port Authority board of commis- sioners at a special meeting. He replaces Emmett C. Lee Jr., who recently resigned the position.

The new director has been at the

Prior to this, he spent nearly 23 years in the Coast Guard where his final assignment was as captain of the Port of Tampa. His tenure in the Coast Guard included service on ships, specializing in port safety and security, and marine environmental protection. <• Circle 243 on Reader Service Card