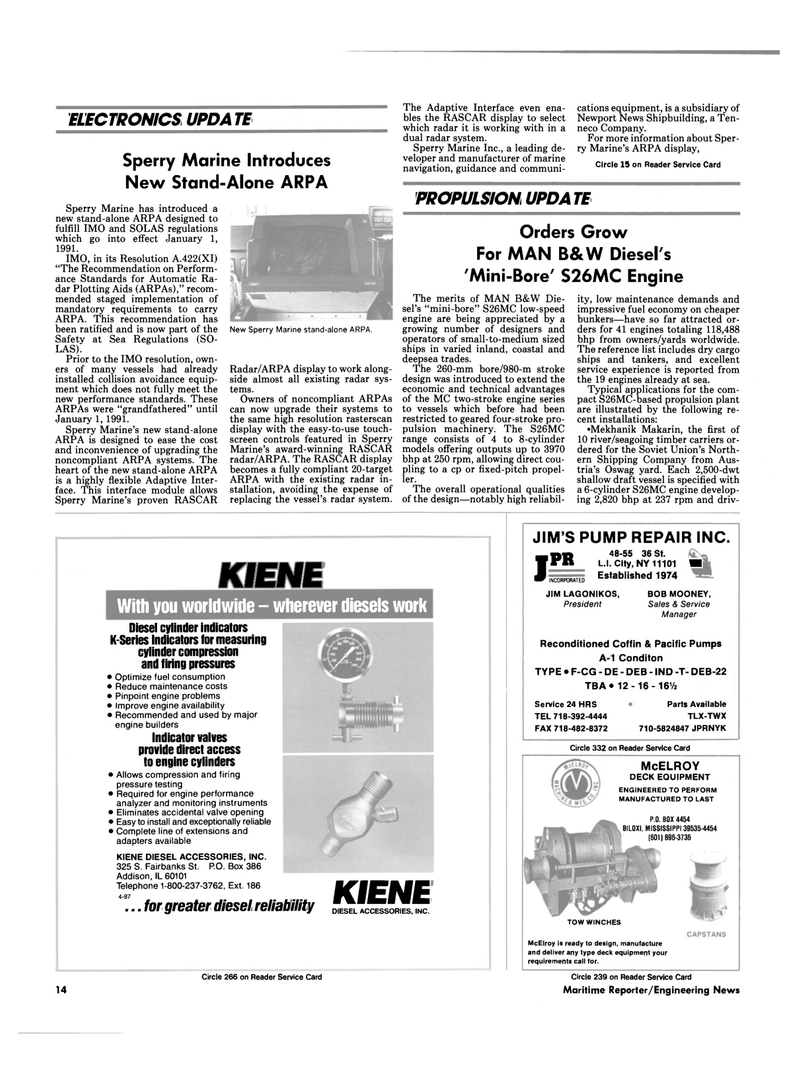 Sperry Marine has introduced a new stand-alone ARPA designed to fulfill IMO and SOLAS regulations which go into effect January 1, 1991.

ARPA. This recommendation has been ratified and is now part of the

Safety at Sea Regulations (SO-

Prior to the IMO resolution, own- ers of many vessels had already installed collision avoidance equip- ment which does not fully meet the new performance standards. These

ARPAs were "grandfathered" until

ARpA is designed to ease the cost and inconvenience of upgrading the noncompliant ARPA systems. The heart of the new stand-alone ARPA is a highly flexible Adaptive Inter- face. This interface module allows

Radar/ARPA display to work along- side almost all existing radar sys- tems.

ARPA with the existing radar in- stallation, avoiding the expense of replacing the vessel's radar system.

The Adaptive Interface even ena- bles the RASCAR display to select which radar it is working with in a dual radar system.

The merits of MAN B&W Die- sel's "mini-bore" S26MC low-speed engine are being appreciated by a growing number of designers and operators of small-to-medium sized ships in varied inland, coastal and deepsea trades.

The 260-mm bore/980-m stroke design was introduced to extend the economic and technical advantages of the MC two-stroke engine series to vessels which before had been restricted to geared four-stroke pro- pulsion machinery. The S26MC range consists of 4 to 8-cylinder models offering outputs up to 3970 bhp at 250 rpm, allowing direct cou- pling to a cp or fixed-pitch propel- ler.

The overall operational qualities of the design—notably high reliabil- cations equipment, is a subsidiary of

The reference list includes dry cargo ships and tankers, and excellent service experience is reported from the 19 engines already at sea.

Typical applications for the com- pact S26MC-based propulsion plant are illustrated by the following re- cent installations: •Mekhanik Makarin, the first of 10 river/seagoing timber carriers or- dered for the Soviet Union's North- ern Shipping Company from Aus- tria's Oswag yard. Each 2,500-dwt shallow draft vessel is specified with a 6-cylinder S26MC engine develop- ing 2,820 bhp at 237 rpm and driv-

With you worldwide - wherever diesels work

McElroy is ready to design, manufacture and deliver any type deck equipment your requirements call for.