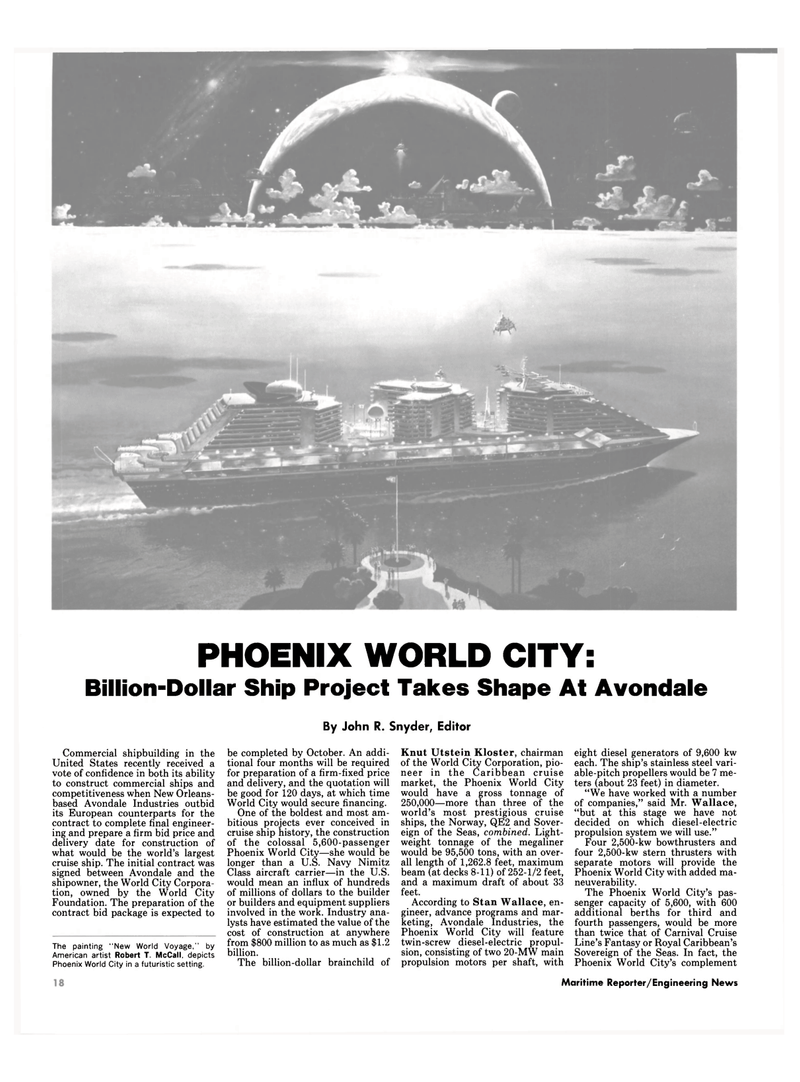 Commercial shipbuilding in the

United States recently received a vote of confidence in both its ability to construct commercial ships and competitiveness when New Orleans- based Avondale Industries outbid its European counterparts for the contract to complete final engineer- ing and prepare a firm bid price and delivery date for construction of what would be the world's largest cruise ship. The initial contract was signed between Avondale and the shipowner, the World City Corpora- tion, owned by the World City

Foundation. The preparation of the contract bid package is expected to

The painting "New World Voyage," by

Phoenix World City in a futuristic setting. be completed by October. An addi- tional four months will be required for preparation of a firm-fixed price and delivery, and the quotation will be good for 120 days, at which time

One of the boldest and most am- bitious projects ever conceived in cruise ship history, the construction of the colossal 5,600-passenger

Phoenix World City—she would be longer than a U.S. Navy Nimitz

Class aircraft carrier—in the U.S. would mean an influx of hundreds of millions of dollars to the builder or builders and equipment suppliers involved in the work. Industry ana- lysts have estimated the value of the cost of construction at anywhere from $800 million to as much as $1.2 billion.

The billion-dollar brainchild of

Knut Utstein Kloster, chairman of the World City Corporation, pio- neer in the Caribbean cruise market, the Phoenix World City would have a gross tonnage of 250,000—more than three of the world's most prestigious cruise ships, the Norway, QE2 and Sover- eign of the Seas, combined. Light- weight tonnage of the megaliner would be 95,500 tons, with an over- all length of 1,262.8 feet, maximum beam (at decks 8-11) of 252-1/2 feet, and a maximum draft of about 33 feet.

Phoenix World City will feature twin-screw diesel-electric propul- sion, consisting of two 20-MW main propulsion motors per shaft, with eight diesel generators of 9,600 kw each. The ship's stainless steel vari- able-pitch propellers would be 7 me- ters (about 23 feet) in diameter. "We have worked with a number of companies," said Mr. Wallace, "but at this stage we have not decided on which diesel-electric propulsion system we will use."

The Phoenix World City's pas- senger capacity of 5,600, with 600 additional berths for third and fourth passengers, would be more than twice that of Carnival Cruise

Sovereign of the Seas. In fact, the