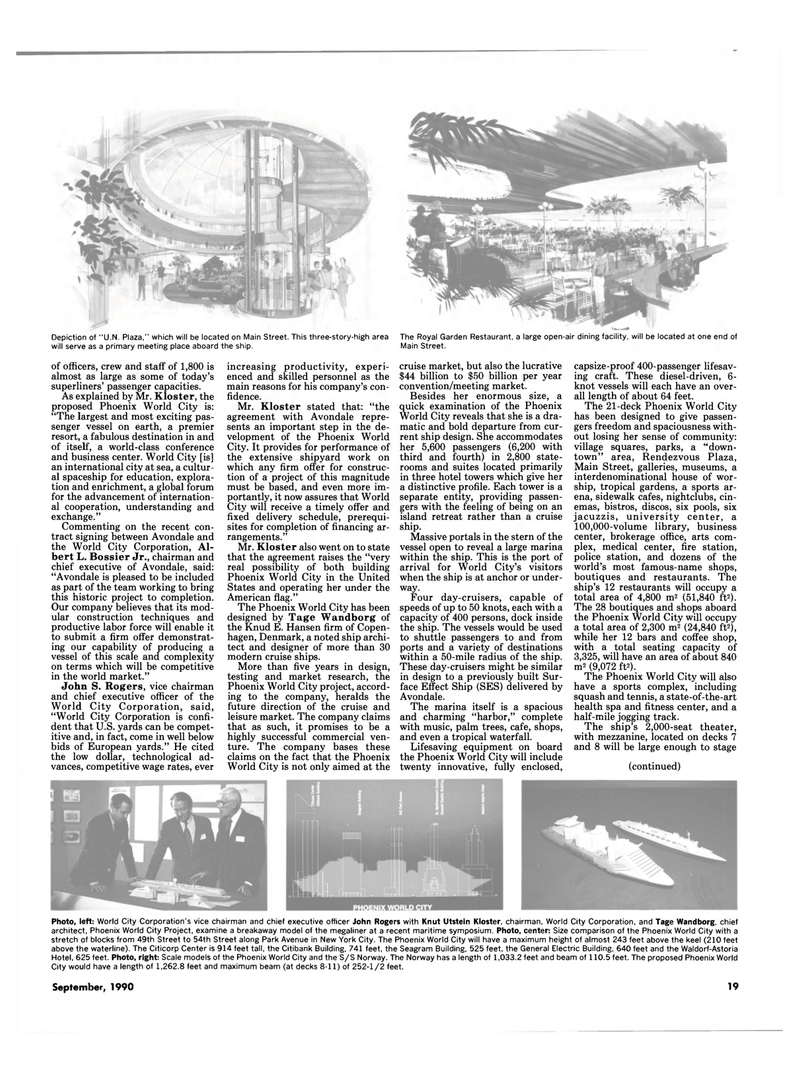 Depiction of "U.N. Plaza," which will be located on Main Street. This three-story-high area The Royal Garden Restaurant, a large open-air dining facility, will be located at one end of will serve as a primary meeting place aboard the ship. n Street. of officers, crew and staff of 1,800 is almost as large as some of today's superliners' passenger capacities.

As explained by Mr. Kloster, the proposed Phoenix World City is: "The largest and most exciting pas- senger vessel on earth, a premier resort, a fabulous destination in and of itself, a world-class conference and business center. World City [is] an international city at sea, a cultur- al spaceship for education, explora- tion and enrichment, a global forum for the advancement of internation- al cooperation, understanding and exchange."

Commenting on the recent con- tract signing between Avondale and the World City Corporation, Al- bert L. Bossier Jr., chairman and chief executive of Avondale, said: "Avondale is pleased to be included as part of the team working to bring this historic project to completion.

Our company believes that its mod- ular construction techniques and productive labor force will enable it to submit a firm offer demonstrat- ing our capability of producing a vessel of this scale and complexity on terms which will be competitive in the world market."

World City Corporation, said, "World City Corporation is confi- dent that U.S. yards can be compet- itive and, in fact, come in well below bids of European yards." He cited the low dollar, technological ad- vances, competitive wage rates, ever increasing productivity, experi- enced and skilled personnel as the main reasons for his company's con- fidence.

Mr. Kloster stated that: "the agreement with Avondale repre- sents an important step in the de- velopment of the Phoenix World

City. It provides for performance of the extensive shipyard work on which any firm offer for construc- tion of a project of this magnitude must be based, and even more im- portantly, it now assures that World

Mr. Kloster also went on to state that the agreement raises the "very real possibility of both building

Phoenix World City in the United

States and operating her under the

The Phoenix World City has been designed by Tage Wandborg of the Knud E. Hansen firm of Copen- hagen, Denmark, a noted ship archi- tect and designer of more than 30 modern cruise ships.

More than five years in design, testing and market research, the

Phoenix World City project, accord- ing to the company, heralds the future direction of the cruise and leisure market. The company claims that as such, it promises to be a highly successful commercial ven- ture. The company bases these claims on the fact that the Phoenix

World City is not only aimed at the cruise market, but also the lucrative $44 billion to $50 billion per year convention/meeting market.

Besides her enormous size, a quick examination of the Phoenix

World City reveals that she is a dra- matic and bold departure from cur- rent ship design. She accommodates her 5,600 passengers (6,200 with third and fourth) in 2,800 state- rooms and suites located primarily in three hotel towers whicb give her a distinctive profile. Each tower is a separate entity, providing passen- gers with the feeling of being on an island retreat rather than a cruise ship.

Massive portals in the stern of the vessel open to reveal a large marina within the ship. This is the port of arrival for World City's visitors when the ship is at anchor or under- way.

Four day-cruisers, capable of speeds of up to 50 knots, each with a capacity of 400 persons, dock inside the ship. The vessels would be used to shuttle passengers to and from ports and a variety of destinations within a 50-mile radius of the ship.

The marina itself is a spacious and charming "harbor," complete with music, palm trees, cafe, shops, and even a tropical waterfall.

Lifesaving equipment on board the Phoenix World City will include twenty innovative, fully enclosed, capsize-proof 400-passenger lifesav- ing craft. These diesel-driven, 6- knot vessels will each have an over- all length of about 64 feet.

The 21-deck Phoenix World City has been designed to give passen- gers freedom and spaciousness with- out losing her sense of community: village squares, parks, a "down- town" area, Rendezvous Plaza,

The Phoenix World City will also have a sports complex, including squash and tennis, a state-of-the-art health spa and fitness center, and a half-mile jogging track.

The ship's 2,000-seat theater, with mezzanine, located on decks 7 and 8 will be large enough to stage (continued)

Photo, left: World City Corporation's vice chairman and chief executive officer John Rogers with Knut Utstein Kloster, chairman, World City Corporation, and Tage Wandborg. chief architect, Phoenix World City Project, examine a breakaway model of the megaliner at a recent maritime symposium. Photo, center: Size comparison of the Phoenix World City with a stretch of blocks from 49th Street to 54th Street along Park Avenue in New York City. The Phoenix World City will have a maximum height of almost 243 feet above the keel (210 feet above the waterline). The Citicorp Center is 914 feet tall, the Citibank Building, 741 feet, the Seagram Building, 525 feet, the General Electric Building, 640 feet and the Waldorf-Astoria

Hotel, 625 feet. Photo, right: Scale models of the Phoenix World City and the S/S Norway. The Norway has a length of 1,033.2 feet and beam of 110.5 feet. The proposed Phoenix World