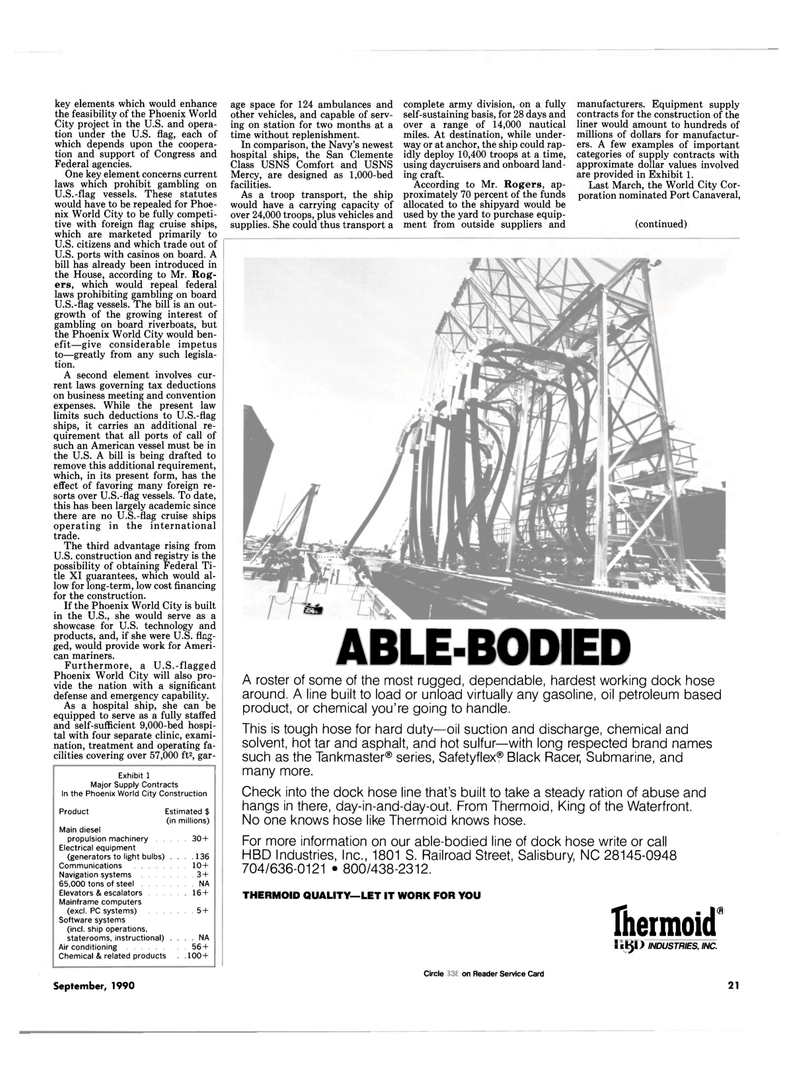 key elements which would enhance the feasibility of the Phoenix World

City project in the U.S. and opera- tion under the U.S. flag, each of which depends upon the coopera- tion and support of Congress and

One key element concerns current laws which prohibit gambling on

U.S.-flag vessels. These statutes would have to be repealed for Phoe- nix World City to be fully competi- tive with foreign flag cruise ships, which are marketed primarily to

U.S. citizens and which trade out of

U.S. ports with casinos on board. A bill has already been introduced in the House, according to Mr. Rog- ers, which would repeal federal laws prohibiting gambling on board

U.S.-flag vessels. The bill is an out- growth of the growing interest of gambling on board riverboats, but the Phoenix World City would ben- efit—give considerable impetus to—greatly from any such legisla- tion.

A second element involves cur- rent laws governing tax deductions on business meeting and convention expenses. While the present law limits such deductions to U.S.-flag ships, it carries an additional re- quirement that all ports of call of such an American vessel must be in the U.S. A bill is being drafted to remove this additional requirement, which, in its present form, has the effect of favoring many foreign re- sorts over U.S.-flag vessels. To date, this has been largely academic since there are no U.S.-flag cruise ships operating in the international trade.

The third advantage rising from

U.S. construction and registry is the possibility of obtaining Federal Ti- tle XI guarantees, which would al- low for long-term, low cost financing for the construction.

If the Phoenix World City is built in the U.S., she would serve as a showcase for U.S. technology and products, and, if she were U.S. flag- ged, would provide work for Ameri- can mariners.

Phoenix World City will also pro- vide the nation with a significant defense and emergency capability.

As a hospital ship, she can be equipped to serve as a fully staffed and self-sufficient 9,000-bed hospi- tal with four separate clinic, exami- nation, treatment and operating fa- cilities covering over 57,000 ft2, gar-

In the Phoenix World City Construction

Chemical & related products . .100 + age space for 124 ambulances and other vehicles, and capable of serv- ing on station for two months at a time without replenishment.

In comparison, the Navy's newest hospital ships, the San Clemente

Mercy, are designed as 1,000-bed facilities.

As a troop transport, the ship would have a carrying capacity of over 24,000 troops, plus vehicles and supplies. She could thus transport a complete army division, on a fully self-sustaining basis, for 28 days and over a range of 14,000 nautical miles. At destination, while under- way or at anchor, the ship could rap- idly deploy 10,400 troops at a time, using daycruisers and onboard land- ing craft.

According to Mr. Rogers, ap- proximately 70 percent of the funds allocated to the shipyard would be used by the yard to purchase equip- ment from outside suppliers and manufacturers. Equipment supply contracts for the construction of the liner would amount to hundreds of millions of dollars for manufactur- ers. A few examples of important categories of supply contracts with approximate dollar values involved are provided in Exhibit 1.

A roster of some of the most rugged, dependable, hardest working dock hose around. A line built to load or unload virtually any gasoline, oil petroleum based product, or chemical you're going to handle.

This is tough hose for hard duty—oil suction and discharge, chemical and solvent, hot tar and asphalt, and hot sulfur—with long respected brand names such as the Tankmaster® series, Safetyflex® Black Racer, Submarine, and many more.

Check into the dock hose line that's built to take a steady ration of abuse and hangs in there, day-in-and-day-out. From Thermoid, King of the Waterfront.