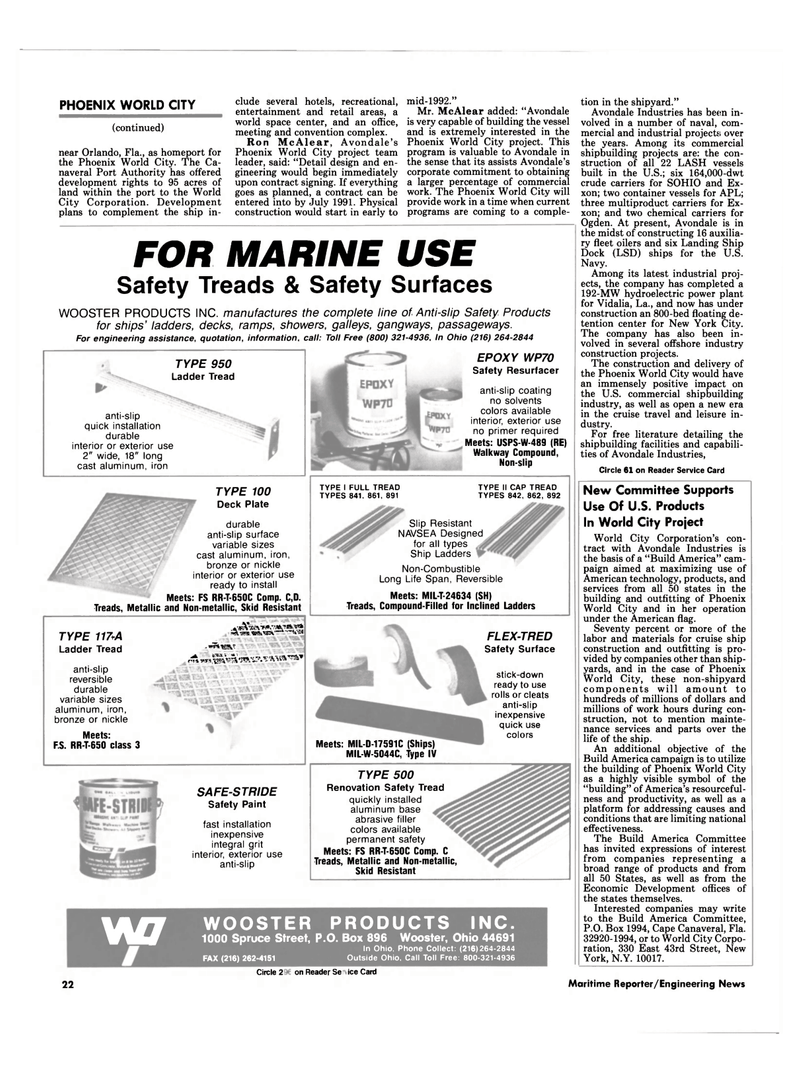 PHOENIX WORLD CITY (continued) near Orlando, Fla., as homeport for the Phoenix World City. The Ca- naveral Port Authority has offered development rights to 95 acres of land within the port to the World

Phoenix World City project team leader, said: "Detail design and en- gineering would begin immediately upon contract signing. If everything goes as planned, a contract can be entered into by July 1991. Physical construction would start in early to mid-1992."

Mr. McAlear added: "Avondale is very capable of building the vessel and is extremely interested in the

Phoenix World City project. This program is valuable to Avondale in the sense that its assists Avondale's corporate commitment to obtaining a larger percentage of commercial work. The Phoenix World City will provide work in a time when current programs are coming to a comple-

NAVSEA Designed for all types

Avondale Industries has been in- volved in a number of naval, com- mercial and industrial projects over the years. Among its commercial shipbuilding projects are: the con- struction of all 22 LASH vessels built in the U.S.; six 164,000-dwt crude carriers for SOHIO and Ex- xon; two container vessels for APL; three multiproduct carriers for Ex- xon; and two chemical carriers for

Ogden. At present, Avondale is in the midst of constructing 16 auxilia- ry fleet oilers and six Landing Ship

Among its latest industrial proj- ects, the company has completed a 192-MW hydroelectric power plant for Vidalia, La., and now has under construction an 800-bed floating de- tention center for New York City.

The company has also been in- volved in several offshore industry construction projects.

The construction and delivery of the Phoenix World City would have an immensely positive impact on the U.S. commercial shipbuilding industry, as well as open a new era in the cruise travel and leisure in- dustry.

For free literature detailing the shipbuilding facilities and capabili- ties of Avondale Industries,

Use Of U.S. Products

American technology, products, and services from all 50 states in the building and outfitting of Phoenix

World City and in her operation under the American flag.

Seventy percent or more of the labor and materials for cruise ship construction and outfitting is pro- vided by companies other than ship- yards, and in the case of Phoenix

World City, these non-shipyard components will amount to hundreds of millions of dollars and millions of work hours during con- struction, not to mention mainte- nance services and parts over the life of the ship.

An additional objective of the

Build America campaign is to utilize the building of Phoenix World City as a highly visible symbol of the "building" of America's resourceful- ness and productivity, as well as a platform for addressing causes and conditions that are limiting national effectiveness.

The Build America Committee has invited expressions of interest from companies representing a broad range of products and from all 50 States, as well as from the

Economic Development offices of the states themselves.

Interested companies may write to the Build America Committee,