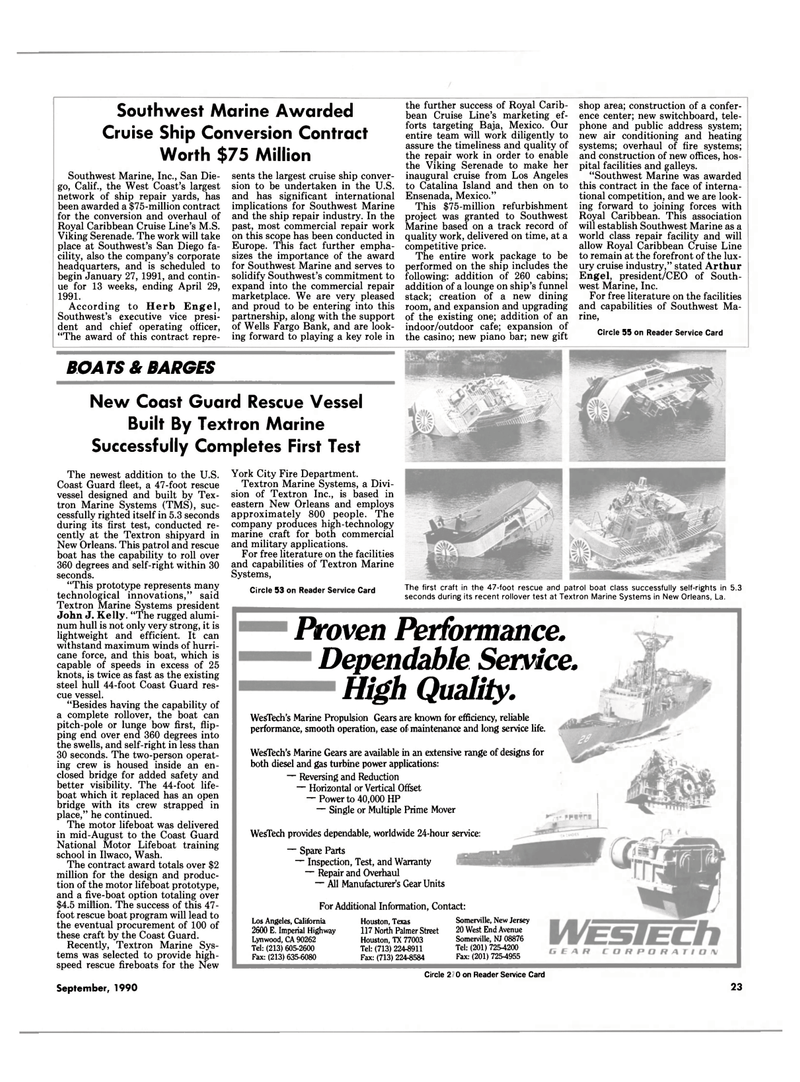 Southwest Marine, Inc., San Die- go, Calif., the West Coast's largest network of ship repair yards, has been awarded a $75-million contract for the conversion and overhaul of

According to Herb Engel,

Southwest's executive vice presi- dent and chief operating officer, "The award of this contract repre- sents the largest cruise ship conver- sion to be undertaken in the U.S. and has significant international implications for Southwest Marine and the ship repair industry. In the past, most commercial repair work on tbis scope has been conducted in

Europe. This fact further empha- sizes the importance of the award for Southwest Marine and serves to solidify Southwest's commitment to expand into the commercial repair marketplace. We are very pleased and proud to be entering into this partnership, along with the support of Wells Fargo Bank, and are look- ing forward to playing a key role in the further success of Royal Carib- bean Cruise Line's marketing ef- forts targeting Baja, Mexico. Our entire team will work diligently to assure the timeliness and quality of the repair work in order to enable the Viking Serenade to make her inaugural cruise from Los Angeles to Catalina Island and then on to

This $75-million refurbishment project was granted to Southwest

Marine based on a track record of quality work, delivered on time, at a competitive price.

The entire work package to be performed on the ship includes the following: addition of 260 cabins; addition of a lounge on ship's funnel stack; creation of a new dining room, and expansion and upgrading of the existing one; addition of an indoor/outdoor cafe; expansion of the casino; new piano bar; new gift shop area; construction of a confer- ence center; new switchboard, tele- phone and public address system; new air conditioning and heating systems; overhaul of fire systems; and construction of new offices, hos- pital facilities and galleys. "Southwest Marine was awarded this contract in the face of interna- tional competition, and we are look- ing forward to joining forces with

Royal Caribbean. This association will establish Southwest Marine as a world class repair facility and will allow Royal Caribbean Cruise Line to remain at the forefront of the lux- ury cruise industry," stated Arthur

For free literature on the facilities and capabilities of Southwest Ma- rine,

The newest addition to the U.S.

Coast Guard fleet, a 47-foot rescue vessel designed and built by Tex- tron Marine Systems (TMS), suc- cessfully righted itself in 5.3 seconds during its first test, conducted re- cently at the Textron shipyard in

New Orleans. This patrol and rescue boat has the capability to roll over 360 degrees and self-right within 30 seconds. "This prototype represents many technological innovations," said

John J. Kelly. "The rugged alumi- num hull is not only very strong, it is lightweight and efficient. It can withstand maximum winds of hurri- cane force, and this boat, which is capable of speeds in excess of 25 knots, is twice as fast as the existing steel hull 44-foot Coast Guard res- cue vessel. "Besides having the capability of a complete rollover, the boat can pitch-pole or lunge bow first, flip- ping end over end 360 degrees into the swells, and self-right in less than 30 seconds. The two-person operat- ing crew is housed inside an en- closed bridge for added safety and better visibility. The 44-foot life- boat which it replaced has an open bridge with its crew strapped in place," he continued.

The contract award totals over $2 million for the design and produc- tion of the motor lifeboat prototype, and a five-boat option totaling over $4.5 million. The success of this 47- foot rescue boat program will lead to the eventual procurement of 100 of these craft by the Coast Guard.

Textron Marine Systems, a Divi- sion of Textron Inc., is based in eastern New Orleans and employs approximately 800 people. The company produces high-technology marine craft for both commercial and military applications.

For free literature on the facilities and capabilities of Textron Marine

Circle 53 on Reader Service Card The first craft in the 47-foot rescue and patrol boat class successfully self-rights in 5.3 seconds during its recent rollover test at Textron Marine Systems in New Orleans, La.

WesTech's Marine Gears are available in an extensive range of designs for both diesel and gas turbine power applications: — Reversing and Reduction — Horizontal or Vertical Offset — Power to 40,000 HP — Single or Multiple Prime Mover