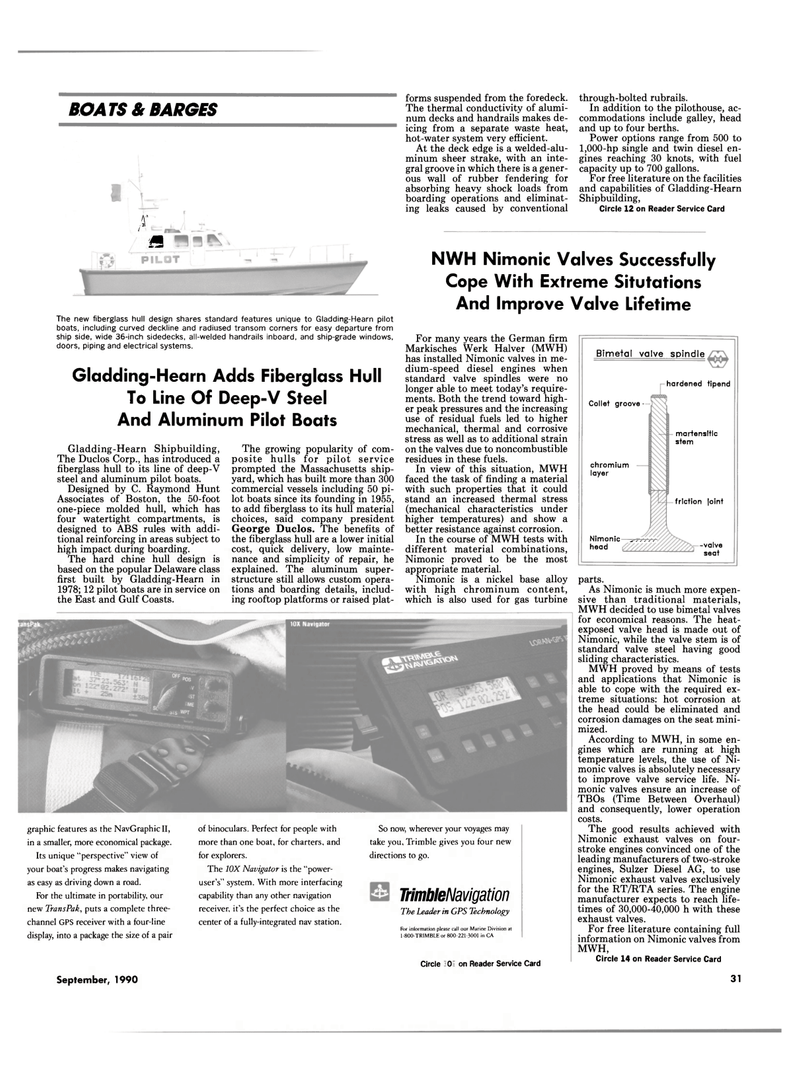 BOATS* BARGES i / forms suspended from the foredeck.

At the deck edge is a welded-alu- minum sheer strake, with an inte- gral groove in which there is a gener- ous wall of rubber tendering for absorbing heavy shock loads from boarding operations and eliminat- ing leaks caused by conventional through-bolted rubrails.

In addition to the pilothouse, ac- commodations include galley, bead and up to four berths.

Power options range from 500 to 1,000-hp single and twin diesel en- gines reaching 30 knots, with fuel capacity up to 700 gallons.

For free literature on the facilities and capabilities of Gladding-Hearn

To Line Of Deep-V Steel

The Duclos Corp., has introduced a fiberglass hull to its line of deep-V steel and aluminum pilot boats.

Associates of Boston, the 50-foot one-piece molded hull, which has four watertight compartments, is designed to ABS rules with addi- tional reinforcing in areas subject to high impact during boarding.

The hard chine hull design is based on the popular Delaware class first built by Gladding-Hearn in 1978; 12 pilot boats are in service on the East and Gulf Coasts.

The growing popularity of com- posite hulls for pilot service prompted the Massachusetts ship- yard, which has built more than 300 commercial vessels including 50 pi- lot boats since its founding in 1955, to add fiberglass to its hull material choices, said company president

For many years the German firm

Markisches Werk Halver (MWH) has installed Nimonic valves in me- dium-speed diesel engines when standard valve spindles were no longer able to meet today's require- ments. Both the trend toward high- er peak pressures and the increasing use of residual fuels led to higher mechanical, thermal and corrosive stress as well as to additional strain on the valves due to noncombustible residues in these fuels.

In view of this situation, MWH faced the task of finding a material with such properties that it could stand an increased thermal stress (mechanical characteristics under bigher temperatures) and show a better resistance against corrosion.

In the course of MWH tests with different material combinations,

Nimonic proved to be the most appropriate material.

Nimonic is a nickel base alloy with high chrominum content, which is also used for gas turbine graphic features as the NavGraphic II, in a smaller, more economical package.

Its unique "perspective" view of your boat's progress makes navigating as easy as driving down a road.

For the ultimate in portability, our new TransPak, puts a complete three- channel GPS receiver with a four-line display, into a package the size of a pair of binoculars. Perfect for people with more than one boat, for charters, and for explorers.

The 10X Navigator is the "power- user's" system. With more interfacing capability than any other navigation receiver, it's the perfect choice as the center of a fully-integrated nav station.

So now, wherever your voyages may take you, Trimble gives you four new directions to go.

The Leader in GPS Technology

As Nimonic is much more expen- sive than traditional materials,

MWH decided to use bimetal valves for economical reasons. The heat- exposed valve head is made out of

Nimonic, while the valve stem is of standard valve steel having good sliding characteristics.

MWH proved by means of tests and applications that Nimonic is able to cope with the required ex- treme situations: hot corrosion at the head could be eliminated and corrosion damages on the seat mini- mized.

According to MWH, in some en- gines which are running at high temperature levels, the use of Ni- monic valves is absolutely necessary to improve valve service life. Ni- monic valves ensure an increase of

The good results achieved with

Nimonic exhaust valves on four- stroke engines convinced one of the leading manufacturers of two-stroke engines, Sulzer Diesel AG, to use

Nimonic exhaust valves exclusively for the RT/RTA series. The engine manufacturer expects to reach life- times of 30,000-40,000 h with these exhaust valves.

For free literature containing full information on Nimonic valves from