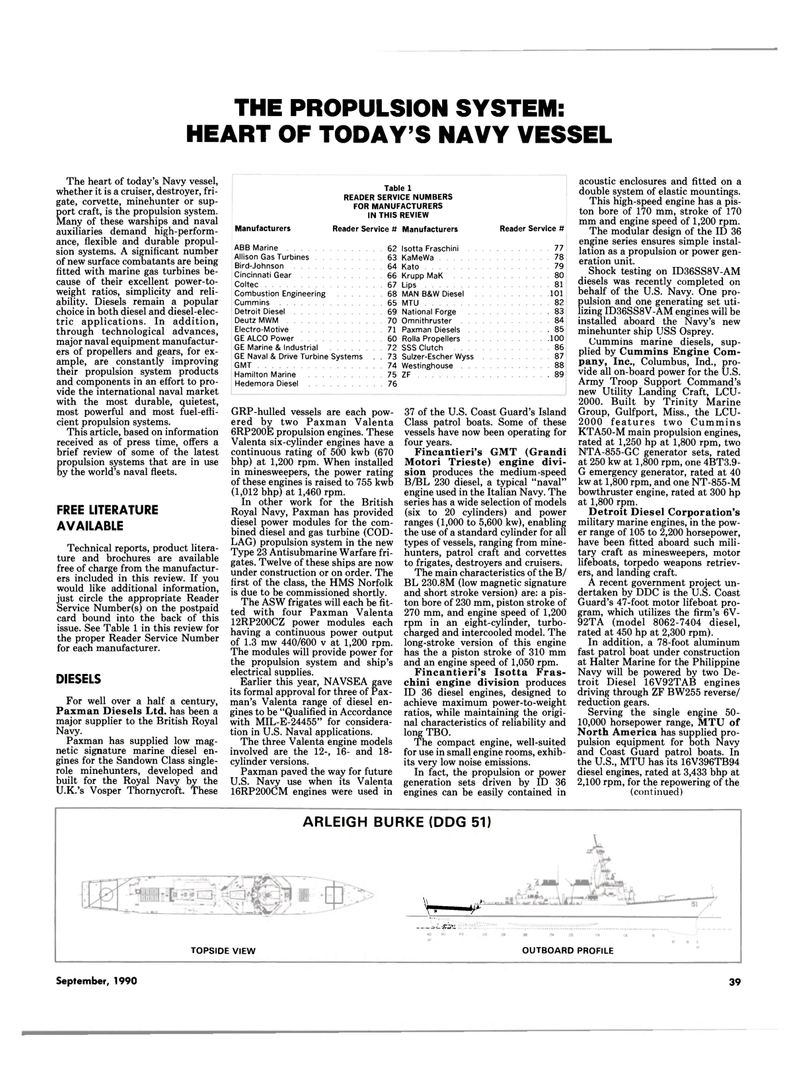 The heart of today's Navy vessel, whether it is a cruiser, destroyer, fri- gate, corvette, minehunter or sup- port craft, is the propulsion system.

Many of these warships and naval auxiliaries demand high-perform- ance, flexible and durable propul- sion systems. A significant number of new surface combatants are being fitted with marine gas turbines be- cause of their excellent power-to- weight ratios, simplicity and reli- ability. Diesels remain a popular choice in both diesel and diesel-elec- tric applications. In addition, through technological advances, major naval equipment manufactur- ers of propellers and gears, for ex- ample, are constantly improving their propulsion system products and components in an effort to pro- vide the international naval market with the most durable, quietest, most powerful and most fuel-effi- cient propulsion systems.

This article, based on information received as of press time, offers a brief review of some of the latest propulsion systems that are in use by the world's naval fleets.

Technical reports, product litera- ture and brochures are available free of charge from the manufactur- ers included in this review. If you would like additional information, just circle the appropriate Reader

Service Number(s) on the postpaid card bound into the back of this issue. See Table 1 in this review for the proper Reader Service Number for each manufacturer.

For well over a half a century,

Paxman Diesels Ltd. has been a major supplier to the British Royal

In other work for the British

LAG) propulsion system in the new

Type 23 Antisubmarine Warfare fri- gates. Twelve of these ships are now under construction or on order. The first of the class, the HMS Norfolk is due to be commissioned shortly.

The modules will provide power for the propulsion system and ship's electrical supplies.

Earlier this year, NAVSEA gave its formal approval for three of Pax- man's Valenta range of diesel en- gines to be "Qualified in Accordance with MIL-E-24455" for considera- tion in U.S. Naval applications.

The three Valenta engine models involved are the 12-, 16- and 18- cylinder versions.

Paxman paved the way for future

U.S. Navy use when its Valenta 16RP200CM engines were used in 37 of the U.S. Coast Guard's Island

Class patrol boats. Some of these vessels have now been operating for four years.

B/BL 230 diesel, a typical "naval" engine used in the Italian Navy. The series has a wide selection of models (six to 20 cylinders) and power ranges (1,000 to 5,600 kw), enabling the use of a standard cylinder for all types of vessels, ranging from mine- hunters, patrol craft and corvettes to frigates, destroyers and cruisers.

The main characteristics of the B/

The compact engine, well-suited for use in small engine rooms, exhib- its very low noise emissions.

In fact, the propulsion or power generation sets driven by ID 36 engines can be easily contained in acoustic enclosures and fitted on a double system of elastic mountings.

The modular design of the ID 36 engine series ensures simple instal- lation as a propulsion or power gen- eration unit.

Shock testing on ID36SS8V-AM diesels was recently completed on behalf of the U.S. Navy. One pro- pulsion and one generating set uti- lizing ID36SS8V-AM engines will be installed aboard the Navy's new minehunter ship USS Osprey.

Detroit Diesel Corporation's military marine engines, in the pow- er range of 105 to 2,200 horsepower, have been fitted aboard such mili- tary craft as minesweepers, motor lifeboats, torpedo weapons retriev- ers, and landing craft.

A recent government project un- dertaken by DDC is the U.S. Coast

In addition, a 78-foot aluminum fast patrol boat under construction at Halter Marine for the Philippine

North America has supplied pro- pulsion equipment for both Navy and Coast Guard patrol boats. In the U.S., MTU has its 16V396TB94 diesel engines, rated at 3,433 bhp at 2,100 rpm, for the repowering of the (continued)