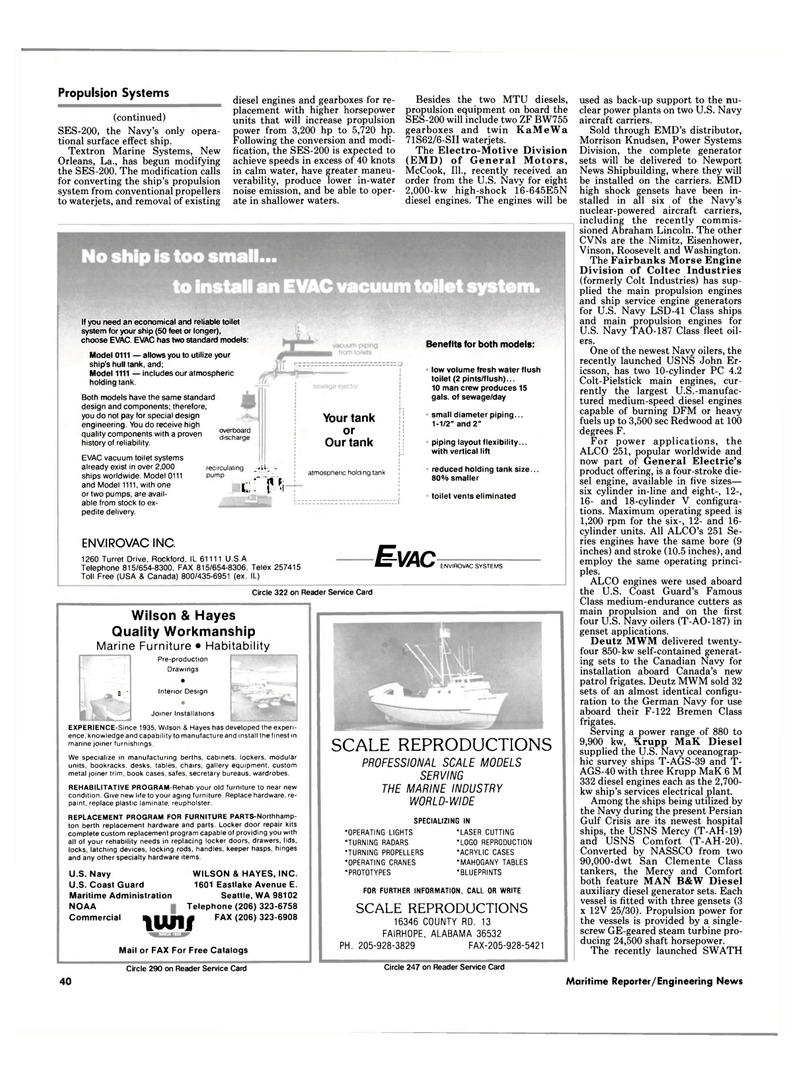 Orleans, La., has begun modifying the SES-200. The modification calls for converting the ship's propulsion system from conventional propellers to waterjets, and removal of existing diesel engines and gearboxes for re- placement with higher horsepower units that will increase propulsion power from 3,200 hp to 5,720 hp.

Following the conversion and modi- fication, the SES-200 is expected to achieve speeds in excess of 40 knots in calm water, have greater maneu- verability, produce lower in-water noise emission, and be able to oper- ate in shallower waters.

Besides the two MTU diesels, propulsion equipment on board the

If you need an economical and reliable toilet system for your ship (50 feet or longer), choose EVAC. EVAC has two standard models:

Both models have the same standard design and components; therefore, you do not pay for special design engineering. You do receive high quality components with a proven history of reliability. overboard discharge

EXPERIENCE-Since 1935, Wilson & Hayes has developed the experi- ence, knowledge and capability to manufacture and install the finest in marine joiner furnishings.

Mail or FAX For Free Catalogs

FOR FURTHER INFORMATION, CALL OR WRITE

Division, the complete generator sets will be delivered to Newport

News Shipbuilding, where they will be installed on the carriers. EMD high shock gensets have been in- stalled in all six of the Navy's nuclear-powered aircraft carriers, including the recently commis- sioned Abraham Lincoln. The other

CVNs are the Nimitz, Eisenhower,

For power applications, the

ALCO engines were used aboard the U.S. Coast Guard's Famous