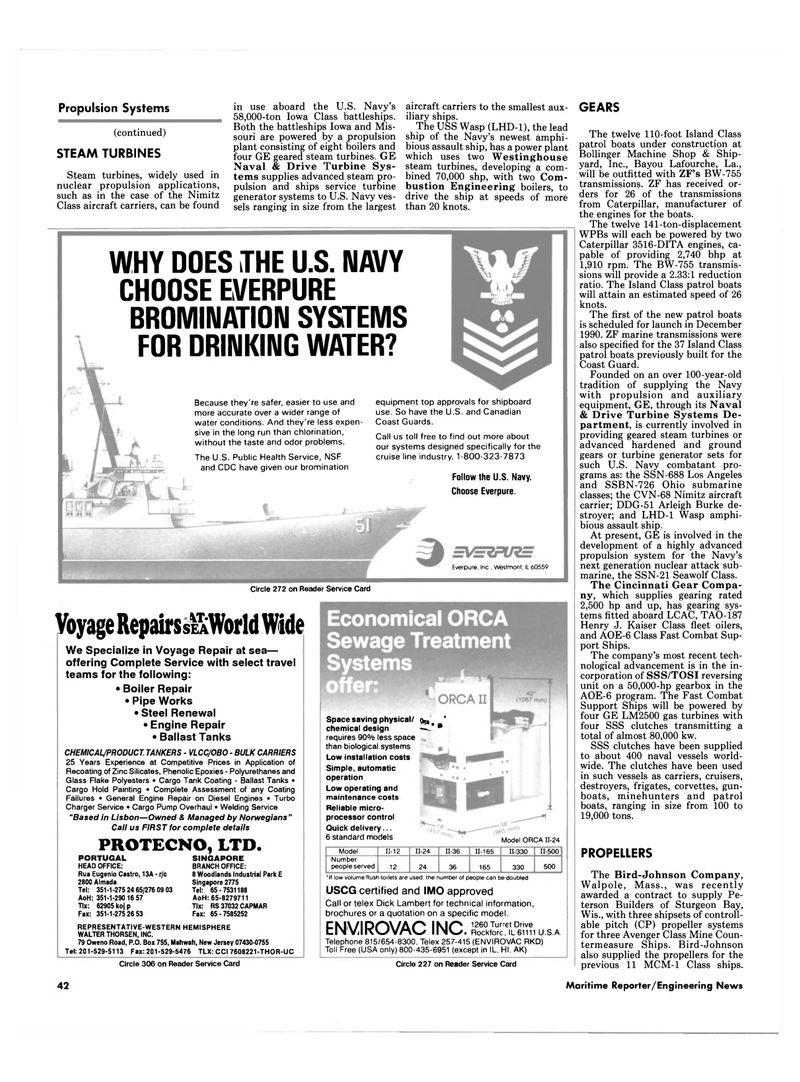 Steam turbines, widely used in nuclear propulsion applications, such as in the case of the Nimitz

Class aircraft carriers, can be found in use aboard the U.S. Navy's 58,000-ton Iowa Class battleships.

Both the battleships Iowa and Mis- souri are powered by a propulsion plant consisting of eight boilers and four GE geared steam turbines. GE

The USS Wasp (LHD-1), the lead ship of the Navy's newest amphi- bious assault ship, has a power plant which uses two Westinghouse steam turbines, developing a com- bined 70,000 shp, with two Com- bustion Engineering boilers, to drive the ship at speeds of more than 20 knots.

Call us FIRST for complete details

Call or telex Dick Lambert for technical information, brochures or a quotation on a specific model.

The twelve 110-foot Island Class patrol boats under construction at

Bollinger Machine Shop & Ship- yard, Inc., Bayou Lafourche, La., will be outfitted with ZF's BW-755 transmissions. ZF has received or- ders for 26 of the transmissions from Caterpillar, manufacturer of the engines for the boats.

WPBs will each be powered by two

The first of the new patrol boats is scheduled for launch in December 1990. ZF marine transmissions were also specified for the 37 Island Class patrol boats previously built for the

At present, GE is involved in the development of a highly advanced propulsion system for the Navy's next generation nuclear attack sub- marine, the SSN-21 Seawolf Class.

The Cincinnati Gear Compa- ny, which supplies gearing rated 2,500 hp and up, has gearing sys- tems fitted aboard LCAC, TAO-187

The company's most recent tech- nological advancement is in the in- corporation of SSS/TOSI reversing unit on a 50,000-hp gearbox in the

SSS clutches have been supplied to about 400 naval vessels world- wide. The clutches have been used in such vessels as carriers, cruisers, destroyers, frigates, corvettes, gun- boats, minehunters and patrol boats, ranging in size from 100 to 19,000 tons.

WHY DOES THE U.S. NAVY

Because they're safer, easier to use and more accurate over a wider range of water conditions. And they're less expen- sive in the long run than chlorination, without the taste and odor problems.

The U.S. Public Health Service, NSF and CDC have given our bromination equipment top approvals for shipboard use. So have the U.S. and Canadian

Call us toll free to find out more about our systems designed specifically for the cruise line industry. 1-800-323-7873