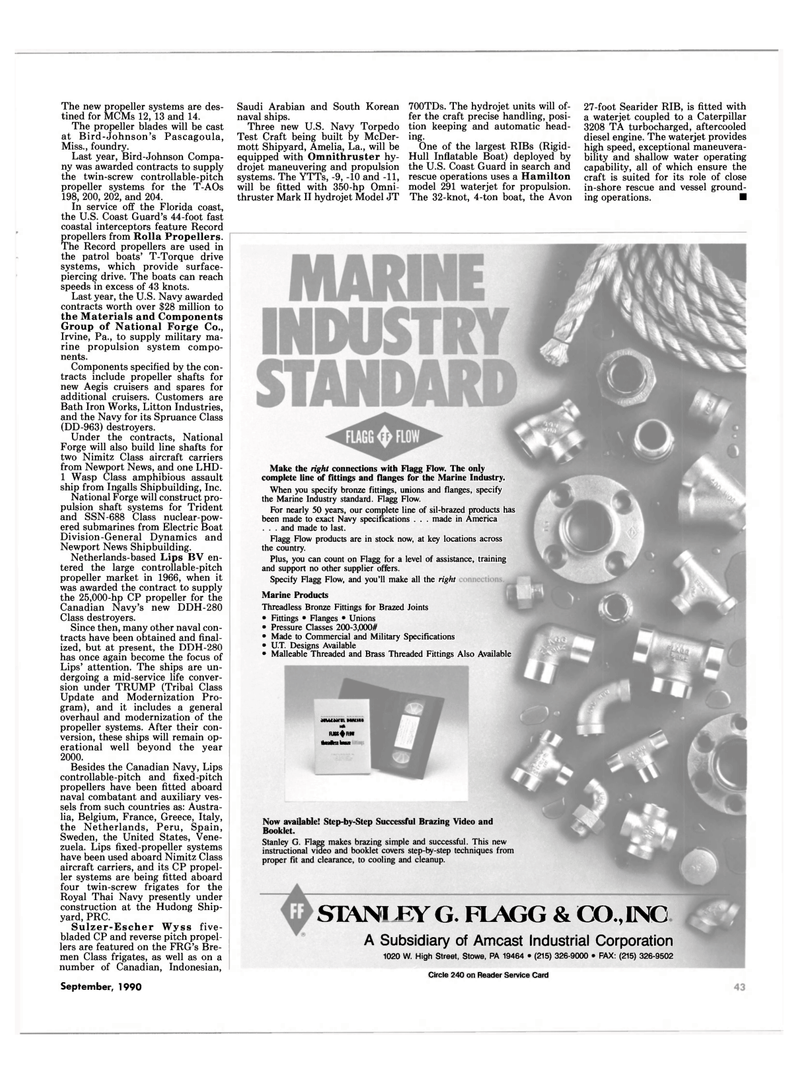 The propeller blades will be cast at Bird-Johnson's Pascagoula,

Last year, Bird-Johnson Compa- ny was awarded contracts to supply the twin-screw controllable-pitch propeller systems for the T-AOs 198, 200, 202, and 204.

The Record propellers are used in the patrol boats' T-Torque drive systems, which provide surface- piercing drive. The boats can reach speeds in excess of 43 knots.

Last year, the U.S. Navy awarded contracts worth over $28 million to the Materials and Components

Components specified by the con- tracts include propeller shafts for new Aegis cruisers and spares for additional cruisers. Customers are

Under the contracts, National

Netherlands-based Lips BV en- tered the large controllable-pitch propeller market in 1966, when it was awarded the contract to supply the 25,000-hp CP propeller for the

Since then, many other naval con- tracts have been obtained and final- ized, but at present, the DDH-280 has once again become the focus of

Update and Modernization Pro- gram), and it includes a general overhaul and modernization of the propeller systems. After their con- version, these ships will remain op- erational well beyond the year 2000.

Besides the Canadian Navy, Lips controllable-pitch and fixed-pitch propellers have been fitted aboard naval combatant and auxiliary ves- sels from such countries as: Austra- lia, Belgium, France, Greece, Italy, the Netherlands, Peru, Spain,

Sweden, the United States, Vene- zuela. Lips fixed-propeller systems have been used aboard Nimitz Class aircraft carriers, and its CP propel- ler systems are being fitted aboard four twin-screw frigates for the

Sulzer-Escher Wyss five- bladed CP and reverse pitch propel- lers are featured on the FRG's Bre- men Class frigates, as well as on a number of Canadian, Indonesian,

One of the largest RIBs (Rigid-

The 32-knot, 4-ton boat, the Avon 27-foot Searider RIB, is fitted with a waterjet coupled to a Caterpillar 3208 TA turbocharged, aftercooled diesel engine. The waterjet provides high speed, exceptional maneuvera- bility and shallow water operating capability, all of which ensure the craft is suited for its role of close in-shore rescue and vessel ground- ing operations. •

Make the right connections with Flagg Flow. The only complete line of fittings and flanges for the Marine Industry.

For nearly 50 years, our complete line of sil-brazed products has been made to exact Navy specifications . . . made in America . . . and made to last.

Flagg Flow products are in stock now, at key locations across the country.

Plus, you can count on Flagg for a level of assistance, training and support no other supplier offers.

Specify Flagg Flow, and you'll make all the right