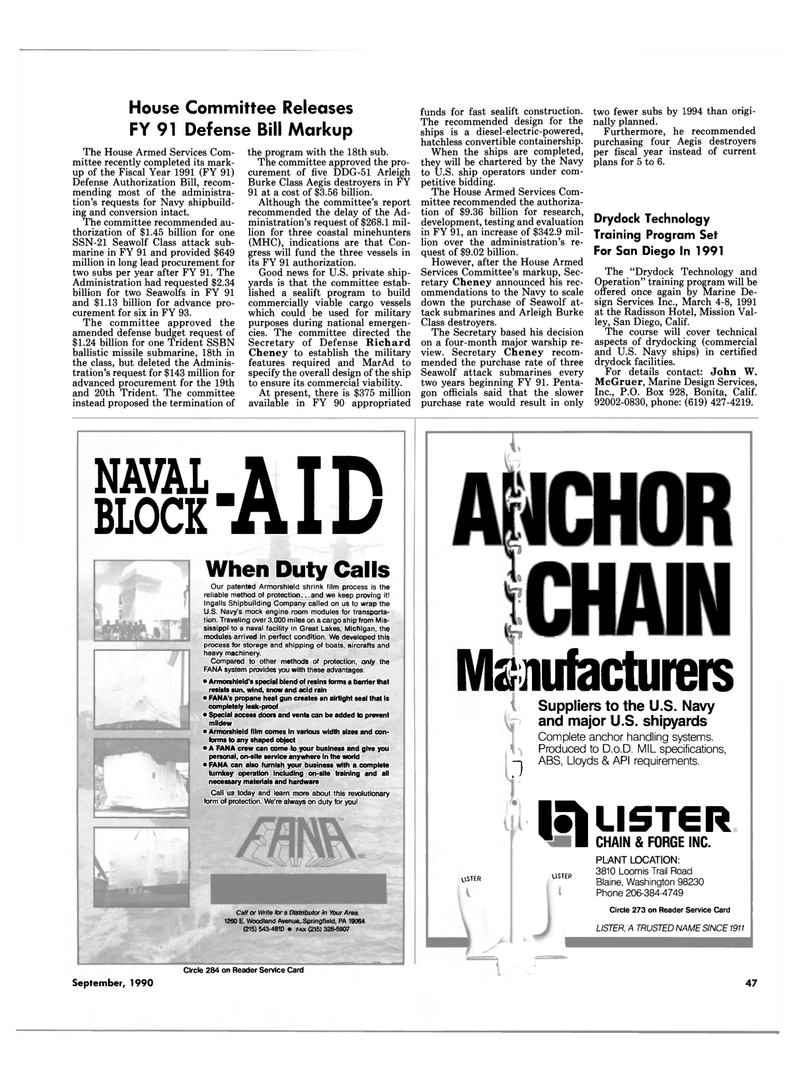 The committee recommended au- thorization of $1.45 billion for one

SSN-21 Seawolf Class attack sub- marine in FY 91 and provided $649 million in long lead procurement for two subs per year after FY 91. The

Administration had requested $2.34 billion for two Seawolfs in FY 91 and $1.13 billion for advance pro- curement for six in FY 93.

The committee approved the amended defense budget request of $1.24 billion for one Trident SSBN ballistic missile submarine, 18th in the class, but deleted the Adminis- tration's request for $143 million for advanced procurement for the 19th and 20th Trident. The committee instead proposed the termination of the program with the 18th sub.

The committee approved the pro- curement of five DDG-51 Arleigh

Although the committee's report recommended the delay of the Ad- ministration's request of $268.1 mil- lion for three coastal minehunters (MHC), indications are that Con- gress will fund the three vessels in its FY 91 authorization.

Good news for U.S. private ship- yards is that the committee estab- lished a sealift program to build commercially viable cargo vessels which could be used for military purposes during national emergen- cies. The committee directed the

Cheney to establish the military features required and MarAd to specify the overall design of the ship to ensure its commercial viability.

At present, there is $375 million available in FY 90 appropriated funds for fast sealift construction.

The recommended design for the ships is a diesel-electric-powered, hatchless convertible containership.

When the ships are completed, they will be chartered by the Navy to U.S. ship operators under com- petitive bidding.

The House Armed Services Com- mittee recommended the authoriza- tion of $9.36 billion for research, development, testing and evaluation in FY 91, an increase of $342.9 mil- lion over the administration's re- quest of $9.02 billion.

However, after the House Armed

Services Committee's markup, Sec- retary Cheney announced his rec- ommendations to the Navy to scale down the purchase of Seawolf at- tack submarines and Arleigh Burke

The Secretary based his decision on a four-month major warship re- view. Secretary Cheney recom- mended the purchase rate of three

Furthermore, he recommended purchasing four Aegis destroyers per fiscal year instead of current plans for 5 to 6.

The "Drydock Technology and

Our patented Armorshield shrink film process is the reliable method of protection.. .and we keep proving it!

Ingalls Shipbuilding Company called on us to wrap the

U.S. Navy's mock engine room modules for transporta- tion. Traveling over 3,000 miles on a cargo ship from Mis- sissippi to a naval facility in Great Lakes, Michigan, the modules arrived in perfect condition. We developed this process for storage and shipping of boats, aircrafts and heavy machinery.

Compared to other methods of protection, only the

FANA system provides you with these advantages: • Armorshleld's special blend of resins forms a barrier that resists sun, wind, snow and acid rain • FANA's propane heat gun creates an airtight seal that is completely leak-proof • Special access doors and vents can be added to prevent mildew • Armorshield film comes in various width sizes and con- forms to any shaped object • A FANA crew can come to your business and give you personal, on-site service anywhere in the world • FANA can also furnish your business with a complete turnkey operation including on-site training and all necessary materials and hardware

Call us today and learn more about this revolutionary form of protection. We're always on duty for you!

Suppliers to the U.S. Navy and major U.S. shipyards