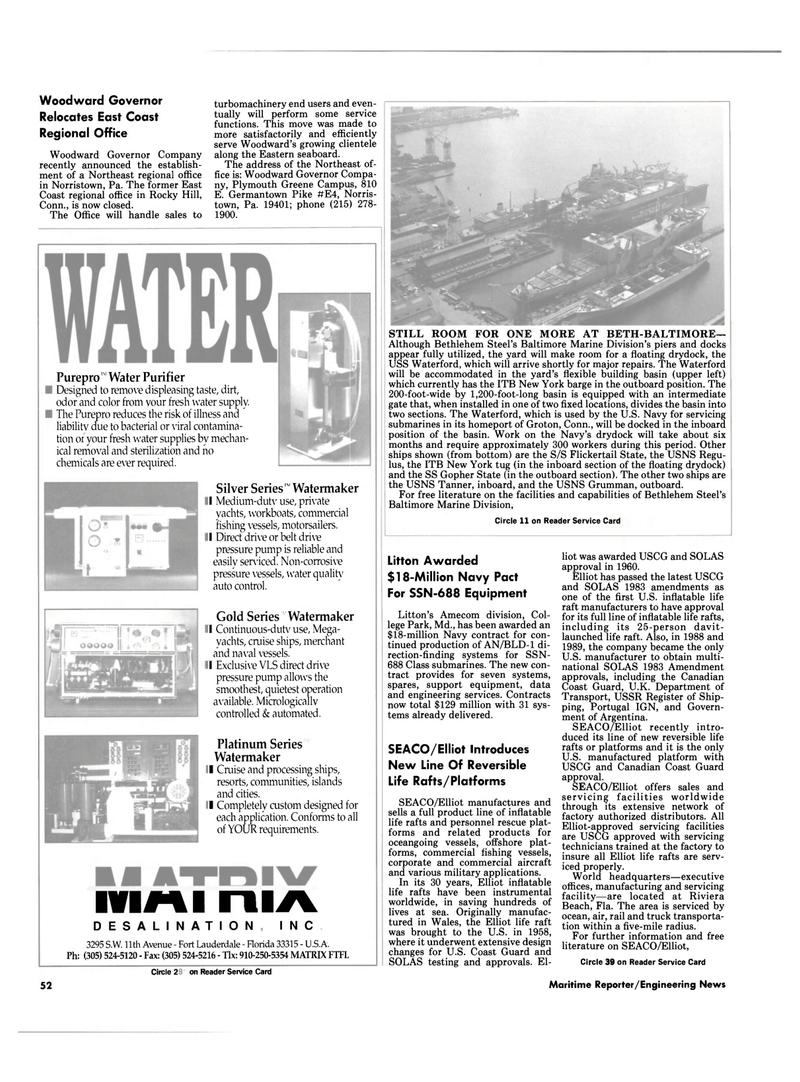 The Office will handle sales to turbomachinery end users and even- tually will perform some service functions. This move was made to more satisfactorily and efficiently serve Woodward's growing clientele along the Eastern seaboard.

The address of the Northeast of- fice is: Woodward Governor Compa- ny, Plymouth Greene Campus, 810

The Purepro reduces the risk of illness and liability due to bacterial or viral contamina- tion or your fresh water supplies by mechan- ical removal and sterilization and no chemicals are ever required.

I Cruise and processing ships, resorts, communities, islands and cities.

I Completely custom designed for each application. Conforms to all of YOUR requirements.

STILL ROOM FOR ONE MORE AT BETH-BALTIMORE—

Although Bethlehem Steel's Baltimore Marine Division's piers and docks appear fully utilized, the yard will make room for a floating drydock, the

USS Waterford, which will arrive shortly for major repairs. The Waterford will be accommodated in the yard's flexible building basin (upper left) which currently has the ITB New York barge in the outboard position. The 200-foot-wide by 1,200-foot-long basin is equipped with an intermediate gate that, when installed in one of two fixed locations, divides the basin into two sections. The Waterford, which is used by the U.S. Navy for servicing submarines in its homeport of Groton, Conn., will be docked in the inboard position of the basin. Work on the Navy's drydock will take about six months and require approximately 300 workers during this period. Other ships shown (from bottom) are the S/S Flickertail State, the USNS Regu- lus, the ITB New York tug (in the inboard section of the floating drydock) and the SS Gopher State (in the outboard section). The other two ships are the USNS Tanner, inboard, and the USNS Grumman, outboard.

For free literature on the facilities and capabilities of Bethlehem Steel's

In its 30 years, Elliot inflatable life rafts have been instrumental worldwide, in saving hundreds of lives at sea. Originally manufac- tured in Wales, the Elliot life raft was brought to the U.S. in 1958, where it underwent extensive design changes for U.S. Coast Guard and

SOLAS testing and approvals. El- liot was awarded USCG and SOLAS approval in 1960.

Elliot has passed the latest USCG and SOLAS 1983 amendments as one of the first U.S. inflatable life raft manufacturers to have approval for its full line of inflatable life rafts, including its 25-person davit- launched life raft. Also, in 1988 and 1989, the company became the only

SEACO/Elliot offers sales and servicing facilities worldwide through its extensive network of factory authorized distributors. All

Elliot-approved servicing facilities are USCG approved with servicing technicians trained at the factory to insure all Elliot life rafts are serv- iced properly.

Beach, Fla. The area is serviced by ocean, air, rail and truck transporta- tion within a five-mile radius.

For further information and free literature on SEACO/Elliot,