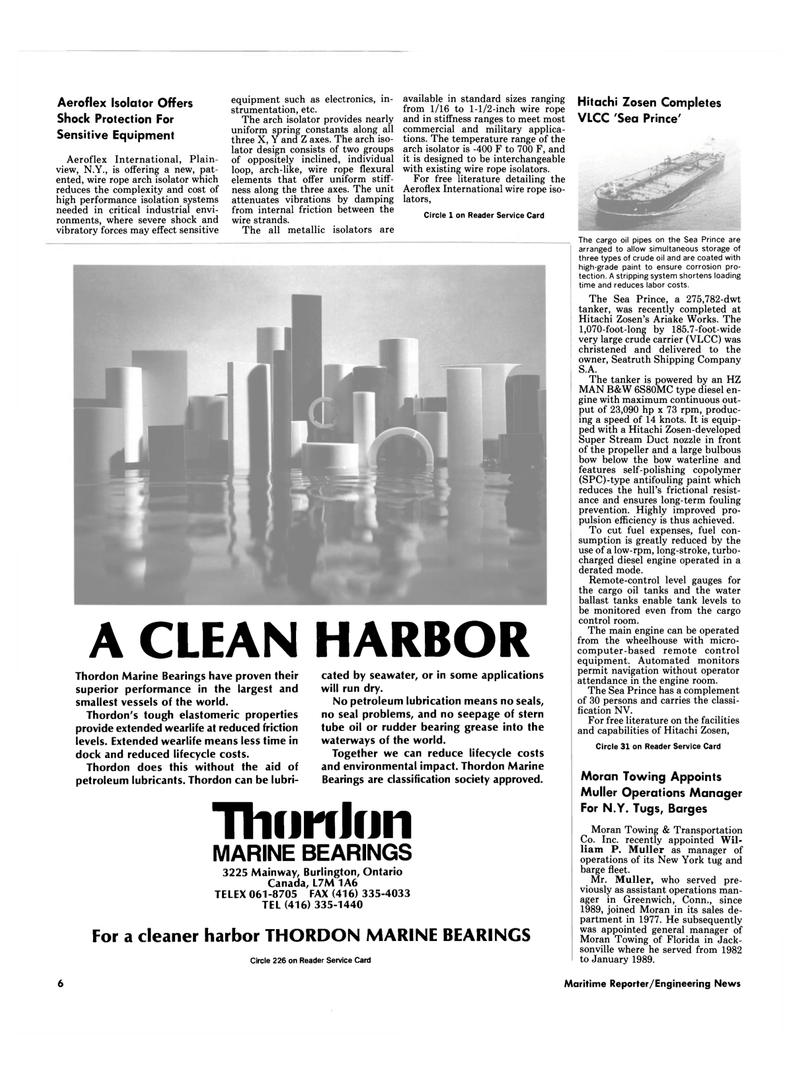 The all metallic isolators are available in standard sizes ranging from 1/16 to 1-1/2-inch wire rope and in stiffness ranges to meet most commercial and military applica- tions. The temperature range of the arch isolator is -400 F to 700 F, and it is designed to be interchangeable with existing wire rope isolators.

For free literature detailing the

Thordon Marine Bearings have proven their superior performance in the largest and smallest vessels of the world.

Thordon does this without the aid of petroleum lubricants. Thordon can be lubri- cated by seawater, or in some applications will run dry.

No petroleum lubrication means no seals, no seal problems, and no seepage of stern tube oil or rudder bearing grease into the waterways of the world.

Together we can reduce lifecycle costs and environmental impact. Thordon Marine

The cargo oil pipes on the Sea Prince are arranged to allow simultaneous storage of three types of crude oil and are coated with high-grade paint to ensure corrosion pro- tection. A stripping system shortens loading time and reduces labor costs.

The tanker is powered by an HZ

To cut fuel expenses, fuel con- sumption is greatly reduced by the use of a low-rpm, long-stroke, turbo- charged diesel engine operated in a derated mode.

Remote-control level gauges for the cargo oil tanks and the water ballast tanks enable tank levels to be monitored even from the cargo control room.

The main engine can be operated from the wheelhouse with micro- computer-based remote control equipment. Automated monitors permit navigation without operator attendance in the engine room.

The Sea Prince has a complement of 30 persons and carries the classi- fication NV.

For free literature on the facilities and capabilities of Hitachi Zosen,

Mr. Muller, who served pre- viously as assistant operations man- ager in Greenwich, Conn., since 1989, joined Moran in its sales de- partment in 1977. He subsequently was appointed general manager of

Moran Towing of Florida in Jack- sonville where he served from 1982 to January 1989. 6 Maritime Reporter/Engineering News