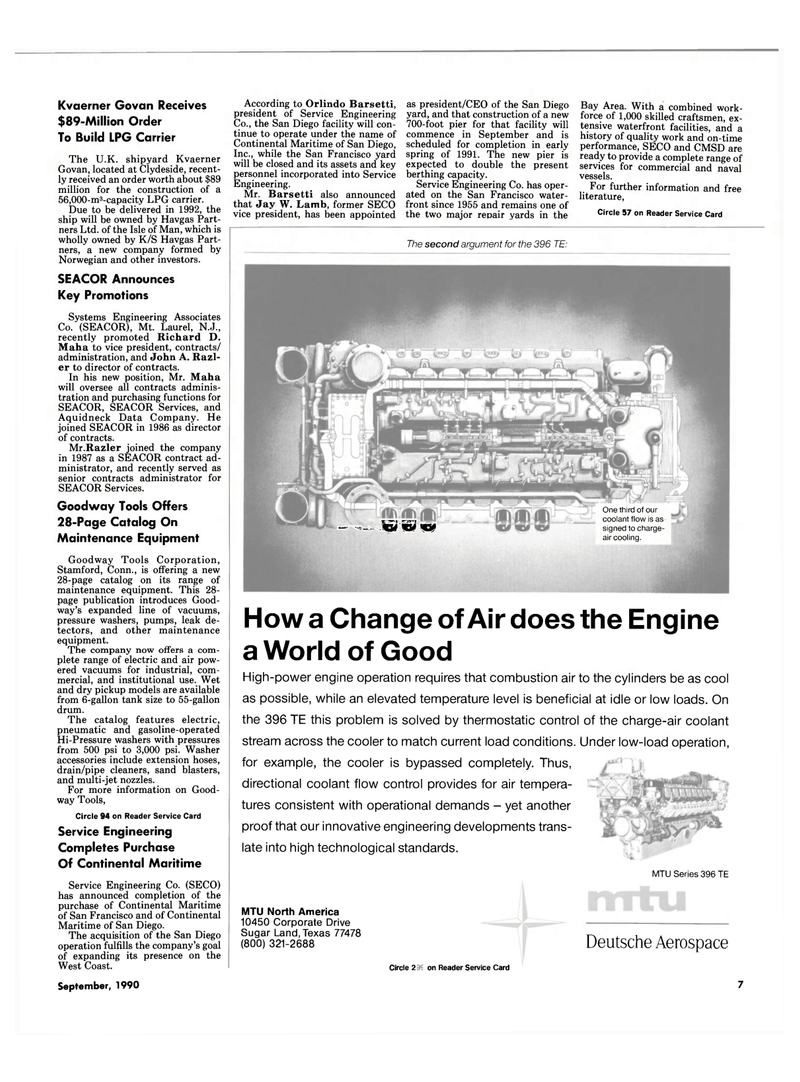 Govan, located at Clydeside, recent- ly received an order worth about $89 million for the construction of a 56,000-m3-capacity LPG carrier.

Norwegian and other investors.

Maha to vice president, contracts/ administration, and John A. Razl- er to director of contracts.

In his new position, Mr. Maha will oversee all contracts adminis- tration and purchasing functions for

Aquidneck Data Company. He joined SEACOR in 1986 as director of contracts.

Mr.Razler joined the company in 1987 as a SEACOR contract ad- ministrator, and recently served as senior contracts administrator for

The company now offers a com- plete range of electric and air pow- ered vacuums for industrial, com- mercial, and institutional use. Wet and dry pickup models are available from 6-gallon tank size to 55-gallon drum.

Service Engineering Co. (SECO) has announced completion of the purchase of Continental Maritime of San Francisco and of Continental

Co., the San Diego facility will con- tinue to operate under the name of

Inc., while the San Francisco yard will be closed and its assets and key personnel incorporated into Service

Mr. Barsetti also announced that Jay W. Lamb, former SECO vice president, has been appointed as president/CEO of the San Diego yard, and that construction of a new 700-foot pier for that facility will commence in September and is scheduled for completion in early spring of 1991. The new pier is expected to double the present berthing capacity.

Service Engineering Co. has oper- ated on the San Francisco water- front since 1955 and remains one of the two major repair yards in the

Bay Area. With a combined work- force of 1,000 skilled craftsmen, ex- tensive waterfront facilities, and a history of quality work and on-time performance, SECO and CMSD are ready to provide a complete range of services for commercial and naval vessels.

For further information and free literature,

The second argument for the 396 TE:

High-power engine operation requires that combustion air to the cylinders be as cool as possible, while an elevated temperature level is beneficial at idle or low loads. On the 396 TE this problem is solved by thermostatic control of the charge-air coolant stream across the cooler to match current load conditions. Under low-load operation, for example, the cooler is bypassed completely. Thus, directional coolant flow control provides for air tempera- tures consistent with operational demands - yet another proof that our innovative engineering developments trans- late into high technological standards.

One third of our coolant flow is as signed to charge- air cooling.