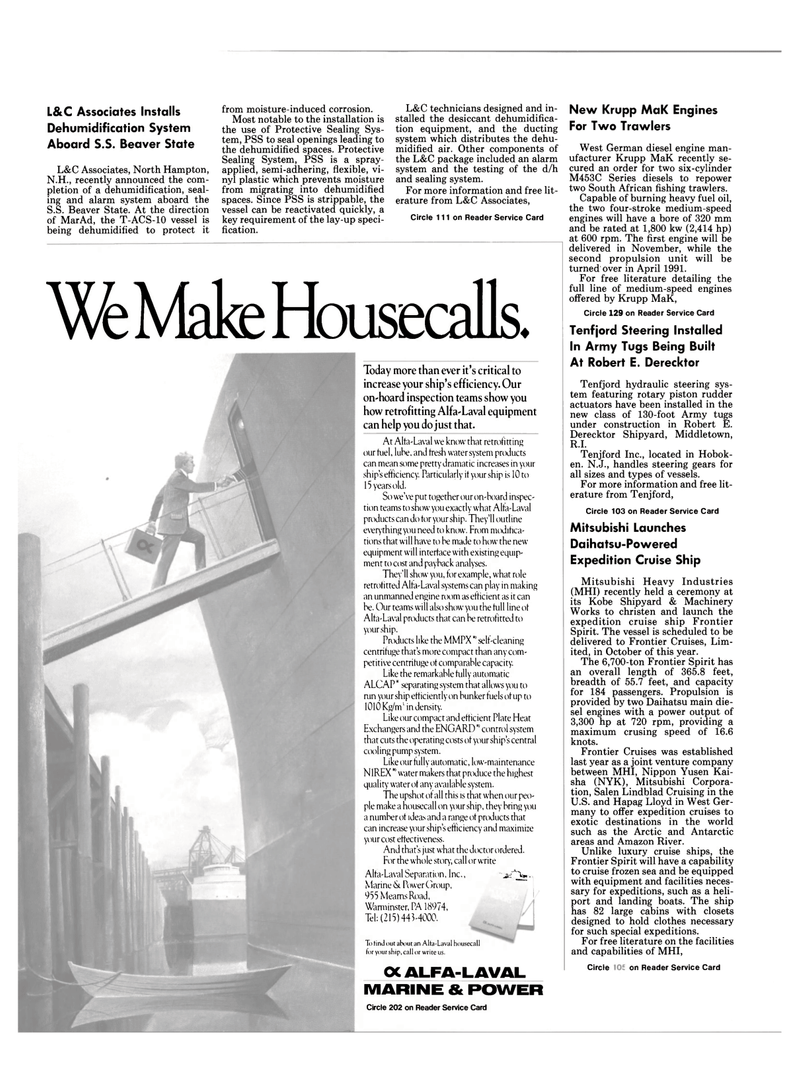 N.H., recently announced the com- pletion of a dehumidification, seal- ing and alarm system aboard the

S.S. Beaver State. At the direction of MarAd, the T-ACS-10 vessel is being dehumidified to protect it from moisture-induced corrosion.

Most notable to the installation is the use of Protective Sealing Sys- tem, PSS to seal openings leading to the dehumidified spaces. Protective

Sealing System, PSS is a spray- applied, semi-adhering, flexible, vi- nyl plastic which prevents moisture from migrating into dehumidified spaces. Since PSS is strippable, the vessel can be reactivated quickly, a key requirement of the lay-up speci- fication.

L&C technicians designed and in- stalled the desiccant dehumidifica- tion equipment, and the ducting system which distributes the dehu- midified air. Other components of the L&C package included an alarm system and the testing of the d/h and sealing system.

For more information and free lit- erature from L&C Associates,

Today more than ever it's critical to increase your ship's efficiency. Our on-hoard inspection teams show you how retrofitting Alfa-Laval equipment can help you do just that.

At Alta-Laval we know that retrofitting our fuel, lube, and fresh water system products can mean some pretty dramatic increases in your ship's efficiency. Particularly it your ship is 10 to 15 years old.

So we've put together our on-hoard inspec- tion teams to show you exactly what Alfa-Laval products can do tor your ship. They'll outline everything you need to know. From modifica- tions that will have to be made to how the new equipment will interlace with existing equip- ment to cost and payback analyses.

They'll show you, for example, what role retrofitted Alfa-Laval systems can play in making an unmanned engine room as efficient as it can be. Our teams will also show you the full line of

Alta-Laval products that can be retrofitted to your ship.

ALCAP" separating system that allows you to run your ship efficiently on bunker fuels of up to 1010 Kg/m' in density.

Exchangers and the ENGARDR control system that cuts the operating costs of your ship's central cooling pump system.

The upshot of all this is that when our peo- ple make a housecall on your ship, they bring you a number ot ideas and a range ot products that can increase your ship's efficiency and maximize your cost effec t i veness.

And that's just what the di>ctor ordered.

For the whole story, call or write

To find out about an Alfa-Laval housecall for your ship, call or write us.

Capable of burning heavy fuel oil, the two four-stroke medium-speed engines will have a bore of 320 mm and be rated at 1,800 kw (2,414 hp) at 600 rpm. The first engine will be delivered in November, while the second propulsion unit will be turned over in April 1991.

In Army Tugs Being Built

For more information and free lit- erature from Tenjford,

Works to christen and launch the expedition cruise ship Frontier

Spirit. The vessel is scheduled to be delivered to Frontier Cruises, Lim- ited, in October of this year.

U.S. and Hapag Lloyd in West Ger- many to offer expedition cruises to exotic destinations in the world such as the Arctic and Antarctic areas and Amazon River.

Unlike luxury cruise ships, the

Frontier Spirit will have a capability to cruise frozen sea and be equipped with equipment and facilities neces- sary for expeditions, such as a heli- port and landing boats. The ship has 82 large cabins with closets designed to hold clothes necessary for such special expeditions.

For free literature on the facilities and capabilities of MHI, <• Circle 243 on Reader Service Card