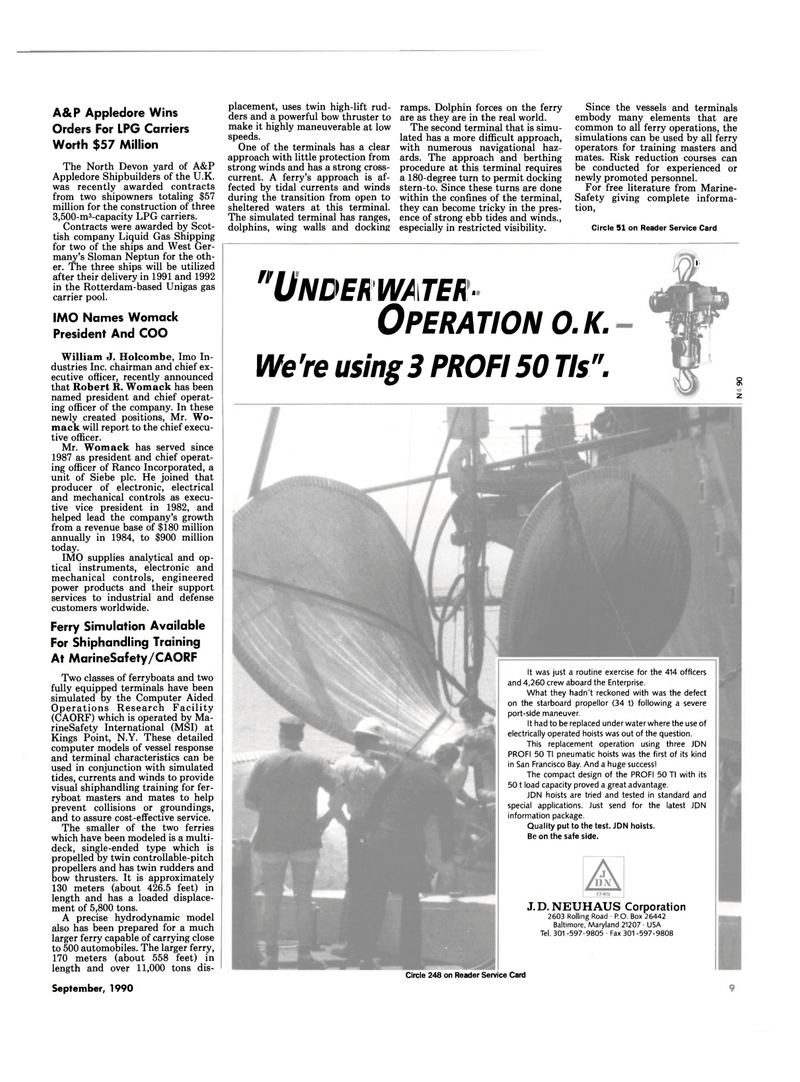 The North Devon yard of A&P

Appledore Shipbuilders of the U.K. was recently awarded contracts from two shipowners totaling $57 million for the construction of three 3,500-m3-capacity LPG carriers.

Contracts were awarded by Scot- tish company Liquid Gas Shipping for two of the ships and West Ger- many's Sloman Neptun for the oth- er. The three ships will be utilized after their delivery in 1991 and 1992 in the Rotterdam-based Unigas gas carrier pool.

Mr. Womack has served since 1987 as president and chief operat- ing officer of Ranco Incorporated, a unit of Siebe pic. He joined that producer of electronic, electrical and mechanical controls as execu- tive vice president in 1982, and helped lead the company's growth from a revenue base of $180 million annually in 1984, to $900 million today.

Kings Point, N.Y. These detailed computer models of vessel response and terminal characteristics can be used in conjunction with simulated tides, currents and winds to provide visual shiphandling training for fer- ryboat masters and mates to help prevent collisions or groundings, and to assure cost-effective service.

The smaller of the two ferries which have been modeled is a multi- deck, single-ended type which is propelled by twin controllable-pitch propellers and has twin rudders and bow thrusters. It is approximately 130 meters (about 426.5 feet) in length and has a loaded displace- ment of 5,800 tons.

A precise hydrodynamic model also has been prepared for a much larger ferry capable of carrying close to 500 automobiles. The larger ferry, 170 meters (about 558 feet) in length and over 11,000 tons dis-

One of the terminals has a clear approach with little protection from strong winds and has a strong cross- current. A ferry's approach is af- fected by tidal currents and winds during the transition from open to sheltered waters at this terminal.

The simulated terminal has ranges, dolphins, wing walls and docking ramps. Dolphin forces on the ferry are as they are in the real world.

The second terminal that is simu- lated has a more difficult approach, with numerous navigational haz- ards. The approach and berthing procedure at this terminal requires a 180-degree turn to permit docking stern-to. Since these turns are done within the confines of the terminal, they can become tricky in the pres- ence of strong ebb tides and winds., especially in restricted visibility.

Since the vessels and terminals embody many elements that are common to all ferry operations, the simulations can be used by all ferry operators for training masters and mates. Risk reduction courses can be conducted for experienced or newly promoted personnel.

For free literature from Marine-

It was just a routine exercise for the 414 officers and 4,260 crew aboard the Enterprise.

What they hadn't reckoned with was the defect on the starboard propellor (34 t) following a severe port-side maneuver.

It had to be replaced under water where the use of electrically operated hoists was out of the question.

PROFI 50 Tl pneumatic hoists was the first of its kind in San Francisco Bay. And a huge success!

The compact design of the PROFI 50 Tl with its 501 load capacity proved a great advantage.

JDN hoists are tried and tested in standard and special applications. Just send for the latest JDN information package.

Be on the safe side.