S t e i n e r Shipyard, Bayou LaBatre, Ala., has completed the conversion of a 180-foot oil field supply boat into a standby/rescue vessel for use in the U.K. sector of the North Sea. The Veesea Typhoon is one of four standby/rescue vessels that will be operated by a joint venture between Vector Offshore, an English firm, and Seacor Marine, Inc. of Morgan City, La.

Converting the Veesea Typhoon to its new role involved returning the ship's mechanical systems to good working order, the addition of a two-level 44-foot by 30-foot rescue module located aft of the main superstructure, updating crew quarters and the galley to accommodate 20 people, sandblasting and repainting the hull, and updating electronic navigation and communications equipment in the pilothouse.

To allow the vessel to combat the higher sea states often encountered during the winter months and to provide a more comfortable environment for the survivors, the bow and the bulwarks were raised and strengthened on the vessel. The pilothouse was also lifted for better visibility and enhanced safety.

Conversion of the Veesea Typhoon was extensive, according to R u s s e l l Steiner, president of Steiner Shipyard. Mechanical systems work included rebuilding both of its Caterpillar D-399 engines to bring them in compliance with ABS specifications. The two Caterpillar 3406 gensets were also rebuilt. A bow thruster, powered by a Caterpillar 3406 diesel only needed repair to its air starting system.

The major addition to the vessel was the construction of the rescue module consisting of forward and aft treatment areas, a hospital ward with bunks for 18 persons, a survivor reception area fitted with seating for 13 persons, a mortuary, survivor berths for 36 persons in a twotier arrangement and survivor seating for 96 persons, also located on both levels. Port and starboard rescue zones lead directly into the two level rescue module.

Aft of the main superstructure and the rescue module is the main cargo deck for transportation of offshore cargo and equipment. This area also holds two 15-man rescue craft that will be added to the boat when she reaches her port in Leith, Scotland.

Conversion of the Veesea Typhoon is the fourth vessel Steiner has built recently for Seacor Marine.

For free literature detailing the facilities and capabilities of Steiner Shipyard, Circle 55 on Reader Service Card 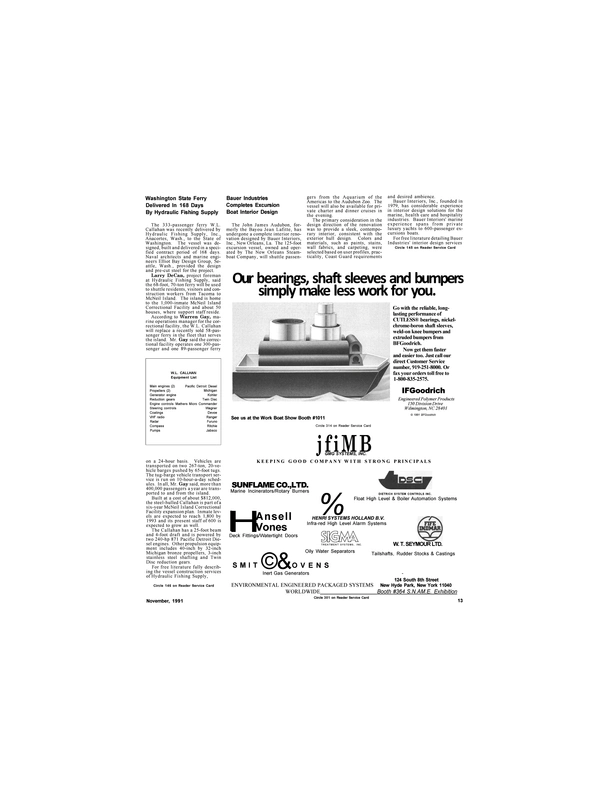