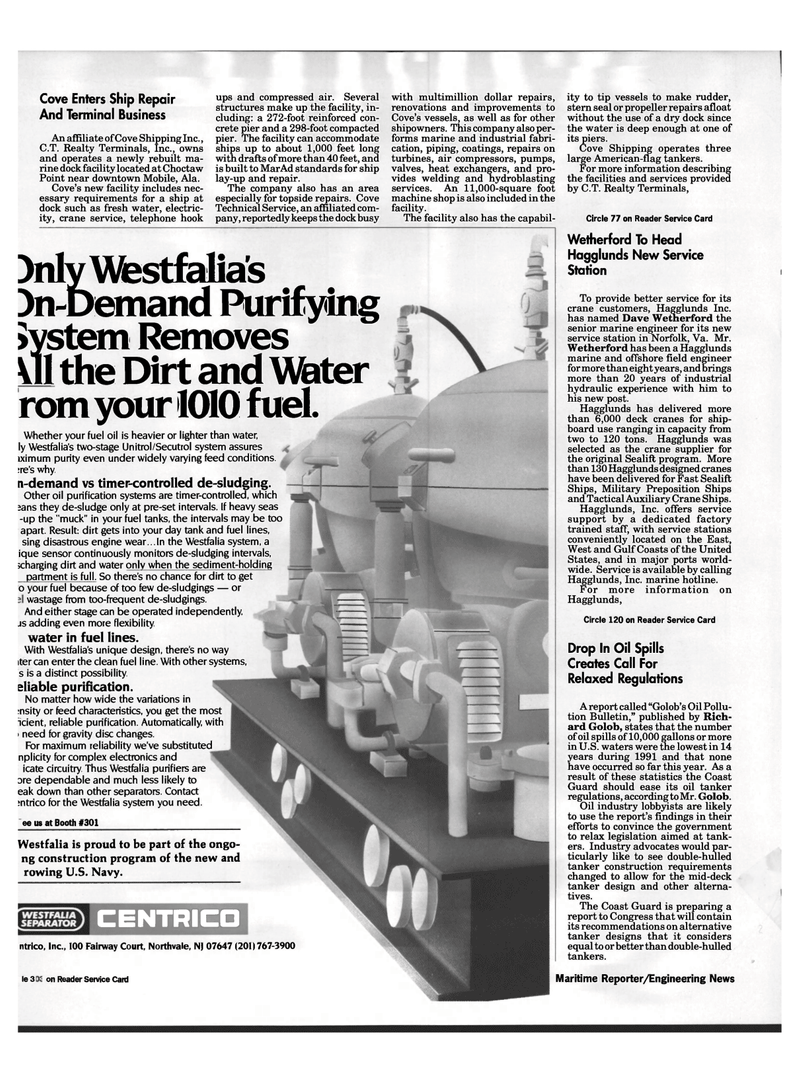 An affiliate of Cove Shipping Inc.,

Point near downtown Mobile, Ala.

Cove's new facility includes nec- essary requirements for a ship at dock such as fresh water, electric- ity, crane service, telephone hook ups and compressed air. Several structures make up the facility, in- cluding: a 272-foot reinforced con- crete pier and a 298-foot compacted pier. The facility can accommodate ships up to about 1,000 feet long with drafts of more than 40 feet, and is built to Mar Ad standards for ship lay-up and repair.

The company also has an area especially for topside repairs. Cove

The facility also has the capabil- ity to tip vessels to make rudder, stern seal or propeller repairs afloat without the use of a dry dock since the water is deep enough at one of its piers.

For more information describing the facilities and services provided by C.T. Realty Terminals,

Wetherford has been a Hagglunds marine and offshore field engineer for more than eight years, and brings more than 20 years of industrial hydraulic experience with him to his new post.

Hagglunds has delivered more than 6,000 deck cranes for ship- board use ranging in capacity from two to 120 tons. Hagglunds was selected as the crane supplier for the original Sealift program. More than 130 Hagglunds designed cranes have been delivered for Fast Sealift

West and Gulf Coasts of the United

States, and in major ports world- wide. Service is available by calling

For more information on

A report called "Golob's Oil Pollu- tion Bulletin," published by Rich- ard Golob, states that the number of oil spills of 10,000 gallons or more in U.S. waters were the lowest in 14 years during 1991 and that none have occurred so far this year. As a result of these statistics the Coast

Guard should ease its oil tanker regulations, according to Mr. Golob.

Oil industry lobbyists are likely to use the report's findings in their efforts to convince the government to relax legislation aimed at tank- ers. Industry advocates would par- ticularly like to see double-hulled tanker construction requirements changed to allow for the mid-deck tanker design and other alterna- tives.

The Coast Guard is preparing a report to Congress that will contain its recommendations on alternative tanker designs that it considers equal to or better than double-hulled tankers.

Westfalia is proud to be part of the ongo- ing construction program of the new and growing U.S. Navy.

System Removes Vll the Dirt and Water rom your 1010 fuel.

Whether your fuel oil is heavier or lighter than water, ly Westfalia's two-stage Unitrol/Secutrol system assures iximum purity even under widely varying feed conditions. :re's why. n-demand vs timer-controlled de-sludging.

Other oil purification systems are timer-controlled, which ;ans they de-sludge only at pre-set intervals. If heavy seas r-up the "muck" in your fuel tanks, the intervals may be too apart. Result: dirt gets into your day tank and fuel lines, using disastrous engine wear...In the Westfalia system, a ique sensor continuously monitors de-sludging intervals, ;charging dirt and water only when the sediment-holding mpartment is full. So there's no chance for dirt to get o your fuel because of too few de-sludgings — or wastage from too-frequent de-sludgings.

And either stage can be operated independently,

With Westfalia's unique design, there's no way iter can enter the clean fuel line. With other systems, s is a distinct possibility. eliable purification.

No matter how wide the variations in insity or feed characteristics, you get the most icient, reliable purification. Automatically, with 1 need for gravity disc changes.

Dre dependable and much less likely to eak down than other separators. Contact :ntrico for the Westfalia system you need.