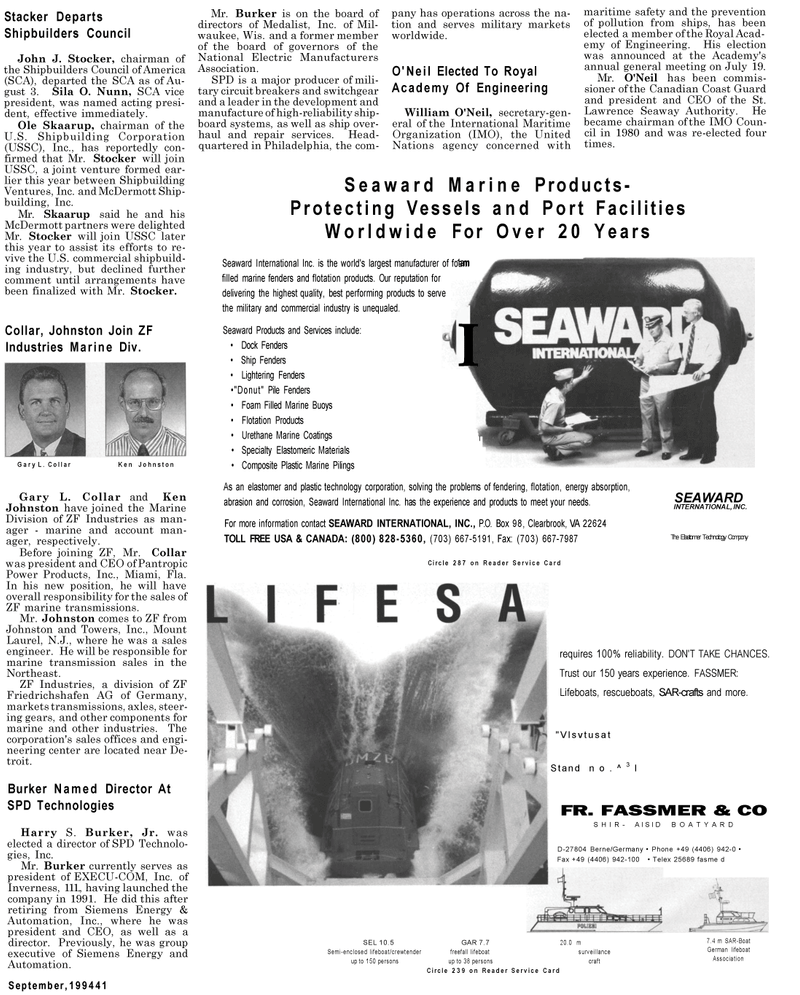 Ole Skaarup, chairman of the

Mr. Skaarup said he and his

Mr. Stocker will join USSC later this year to assist its efforts to re- vive the U.S. commercial shipbuild- ing industry, but declined further comment until arrangements have been finalized with Mr. Stocker.

Johnston have joined the Marine

Before joining ZF, Mr. Collar was president and CEO of Pantropic

In his new position, he will have overall responsibility for the sales of

Mr. Johnston comes to ZF from

Laurel, N.J., where he was a sales engineer. He will be responsible for marine transmission sales in the

ZF Industries, a division of ZF

Friedrichshafen AG of Germany, markets transmissions, axles, steer- ing gears, and other components for marine and other industries. The corporation's sales offices and engi- neering center are located near De- troit.

Mr. Burker currently serves as president of EXECU-COM, Inc. of

Inverness, 111., having launched the company in 1991. He did this after retiring from Siemens Energy &

Automation, Inc., where he was president and CEO, as well as a director. Previously, he was group executive of Siemens Energy and

Mr. Burker is on the board of directors of Medalist, Inc. of Mil- waukee, Wis. and a former member of the board of governors of the

SPD is a major producer of mili- tary circuit breakers and switchgear and a leader in the development and manufacture of high-reliability ship- board systems, as well as ship over- haul and repair services. Head- quartered in Philadelphia, the com- pany has operations across the na- tion and serves military markets worldwide.

Nations agency concerned with maritime safety and the prevention of pollution from ships, has been elected a member of the Royal Acad- emy of Engineering. His election was announced at the Academy's annual general meeting on July 19.

Mr. O'Neil has been commis- sioner of the Canadian Coast Guard and president and CEO of the St.

Lawrence Seaway Authority. He became chairman of the IMO Coun- cil in 1980 and was re-elected four times.

Worldwide For Over 20 Years

Seaward International Inc. is the world's largest manufacturer of foam filled marine fenders and flotation products. Our reputation for delivering the highest quality, best performing products to serve the military and commercial industry is unequaled.

As an elastomer and plastic technology corporation, solving the problems of fendering, flotation, energy absorption, abrasion and corrosion, Seaward International Inc. has the experience and products to meet your needs. 1a