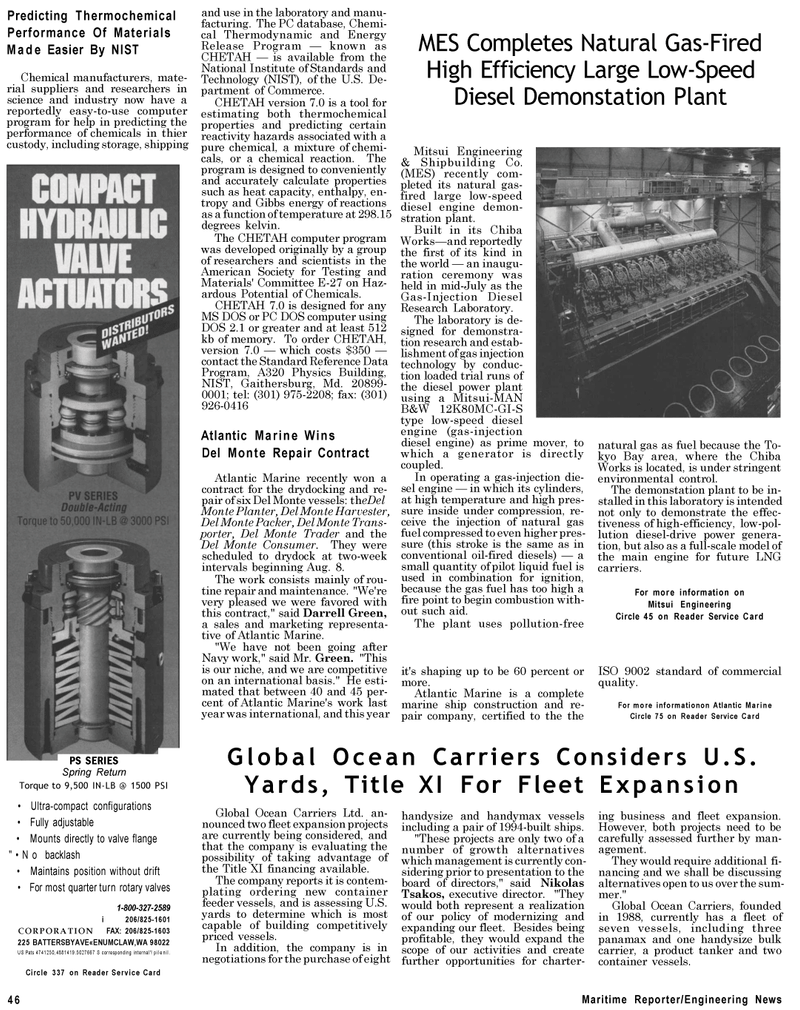 Made Easier By NIST

Chemical manufacturers, mate- rial suppliers and researchers in science and industry now have a reportedly easy-to-use computer program for help in predicting the performance of chemicals in thier custody, including storage, shipping

Circle 337 on Reader Service Card and use in the laboratory and manu- facturing. The PC database, Chemi- cal Thermodynamic and Energy

CHETAH — is available from the

National Institute of Standards and

Technology (NIST), of the U.S. De- partment of Commerce.

CHETAH version 7.0 is a tool for estimating both thermochemical properties and predicting certain reactivity hazards associated with a pure chemical, a mixture of chemi- cals, or a chemical reaction. The program is designed to conveniently and accurately calculate properties such as heat capacity, enthalpy, en- tropy and Gibbs energy of reactions as a function of temperature at 298.15 degrees kelvin.

American Society for Testing and

CHETAH 7.0 is designed for any

Atlantic Marine recently won a contract for the drydocking and re- pair of six Del Monte vessels: theDel

Del Monte Consumer. They were scheduled to drydock at two-week intervals beginning Aug. 8.

The work consists mainly of rou- tine repair and maintenance. "We're very pleased we were favored with this contract," said Darrell Green, a sales and marketing representa- tive of Atlantic Marine. "We have not been going after

Navy work," said Mr. Green. "This is our niche, and we are competitive on an international basis." He esti- mated that between 40 and 45 per- cent of Atlantic Marine's work last year was international, and this year

Built in its Chiba

In operating a gas-injection die- sel engine — in which its cylinders, at high temperature and high pres- sure inside under compression, re- ceive the injection of natural gas fuel compressed to even higher pres- sure (this stroke is the same as in conventional oil-fired diesels) — a small quantity of pilot liquid fuel is used in combination for ignition, because the gas fuel has too high a fire point to begin combustion with- out such aid.

The plant uses pollution-free natural gas as fuel because the To- kyo Bay area, where the Chiba

Works is located, is under stringent environmental control.

The demonstation plant to be in- stalled in this laboratory is intended not only to demonstrate the effec- tiveness of high-efficiency, low-pol- lution diesel-drive power genera- tion, but also as a full-scale model of the main engine for future LNG carriers.

For more information on

Circle 45 on Reader Service Card it's shaping up to be 60 percent or more.

Atlantic Marine is a complete marine ship construction and re- pair company, certified to the the

Global Ocean Carriers Ltd. an- nounced two fleet expansion projects are currently being considered, and that the company is evaluating the possibility of taking advantage of the Title XI financing available.

The company reports it is contem- plating ordering new container feeder vessels, and is assessing U.S. yards to determine which is most capable of building competitively priced vessels.

In addition, the company is in negotiations for the purchase of eight handysize and handymax vessels including a pair of 1994-built ships. "These projects are only two of a number of growth alternatives which management is currently con- sidering prior to presentation to the board of directors," said Nikolas

Tsakos, executive director. "They would both represent a realization of our policy of modernizing and expanding our fleet. Besides being profitable, they would expand the scope of our activities and create further opportunities for charter- ing business and fleet expansion.

However, both projects need to be carefully assessed further by man- agement.

They would require additional fi- nancing and we shall be discussing alternatives open to us over the sum- mer."

Global Ocean Carriers, founded in 1988, currently has a fleet of seven vessels, including three panamax and one handysize bulk carrier, a product tanker and two container vessels. 46 Maritime Reporter/Engineering News