Bragging rights for the title of most prolific cruise ship builder has lately centered on Italy and Finland, Fincantieri and Kvaerner Masa Yards to be exact. While the Italian contingency has pulled ahead of late, the Finnish shipyard located in Helsinki has recently delivered M/S Costa Atlantica for Costa Crociere SpA, a 85,700-gt, RINAclassed cruise ship which is the first in series of a Panamax-Max size liner.

$340 million) ship is particularly noteworthy, as it is the largest in the Costa Crociere fleet, and the largest built for a European cruise line.

Considering that the ship is a first-inseries, the timeframe from order to completion has been remarkably compact: the order for the new ship was placed in early 1998; hull assembly began March 19, 1999; launching took place November 11, 1999; first cruise was July 16, 2000. Designed to carry 2,680 passengers in 1,057 staterooms and 902 crew, the interior styling of the ship is described as "classic Italian," designed by Joe Farcus. To add an extra bit of Italian flair, each of the ship's 12 decks has been named after movies directed by the famous Federico Fellini.

Each is connected to an alternator producing electricity to the ship's main electric network.

The engines provide power for a pair of azimuthing electric Azipod propulsion units, providing a service speed of 22 knots. 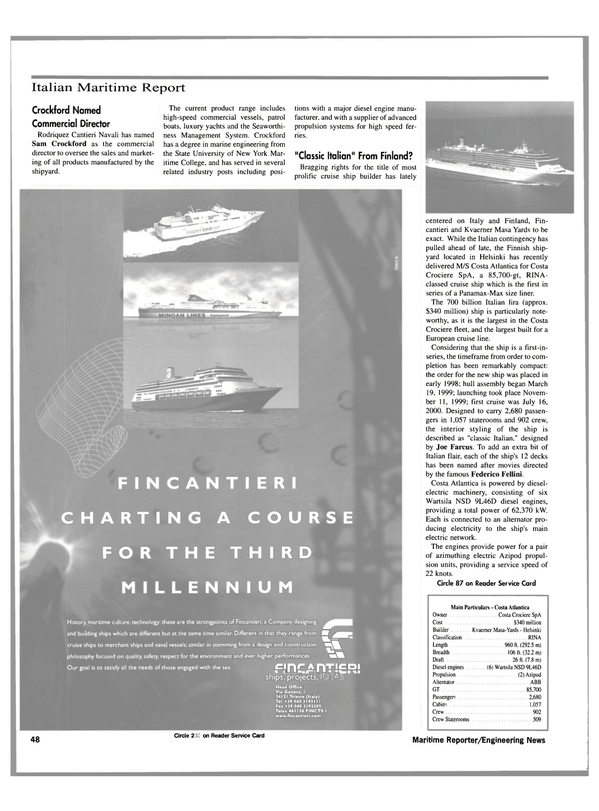